Who could have known how much influence the writings of a mysterious group of prophets and scribes hundreds of years before Messiah would have on our understanding of end times prophecy?

Josh Peck says much of what we’ve been taught about first century Israel is incomplete. There were, in fact, Jewish believers who knew exactly what to expect in the coming Messiah: that He would be God in the flesh and would die for our sins. If they accurately predicted the first arrival of Jesus, what did they say about His return?

In Josh Peck’s groundbreaking book, you will learn: 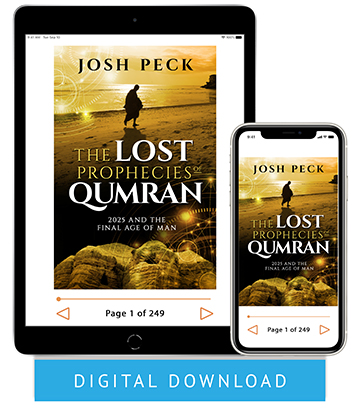 • How an ancient Jewish calendar predicts 2025 AD as prophetically significant
• How the enigmatic Essenes formed and their influence on the New Testament
• Lost prophecies recently discovered in the Dead Sea Scrolls
• Messages the Essenes left behind for later believers
• How Daniel and Revelation relate to the Essene timetable
• Hidden feasts the Essenes observed and their relevance
• How the Essenes’ disappeared and how it relates to believers today.

Once you learn about the Essenes and the Dead Sea Scrolls they left behind, you will understand the Bible in a new light. You will discover what God is revealing at the close of our age and what is ahead, soon! (471 pages)

Josh Peck is an author/researcher called to waking up believers to the reality of the Bible and separating truth from tradition. He is the founder of Ministudy Ministry and also hosts an internet show entitled The Sharpening.