Walk on water with God! Prophesy!

Every believer has some form of communication with God, but sometimes God uses a third party. God simply reveals information and purposes that otherwise could not be known. He gets the glory, we get the encounter—and EVERYBODY gets blessed!

Rob Sanchez’ new book is a powerful guide to speaking on behalf of God. In Discovering and Releasing Your Prophetic Voice Rob gives valuable direction as he helps you… 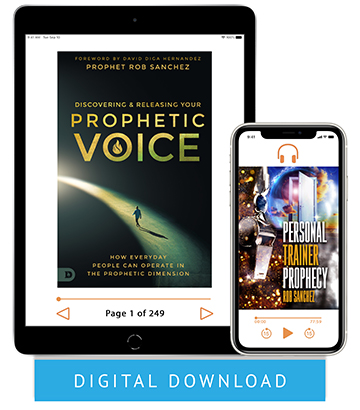 Rob draws on 20 years of ministry and his own encounters with God. His 3-CD/audio series, Personal Trainer for Prophecy, will bless you and others with keys to receiving a sure word from God! It also includes prayers of activation.

Rob says God still speaks and if you are ready He wants to speak through you.

Rob Sanchez is a prophet, author and mentor who ministers alongside his wife, Juanita, in central California. They have three daughters.

Discovering and Releasing Your Prophetic Voice & Personal Trainer for Prophecy