Two Sides of Eternity, and No Turning Back

This offer is for the digital versions only. It does not include the physical book or CDs.

Donna Rigney’s spiritual walk has been filled with the supernatural. Her early encounters led Donna and her husband Jack to take in and raise 20 children!

The Jesus Donna loves so much had plans for her, and what began at the age of seven grew beyond the usual bounds. Donna’s experiences would later include intense visions of Heaven, vibrant with color, beauty and wonders.

But with Jesus at her side, Donna also traveled to the depths of hell and its dark torments—over several months. Now Donna’s errand is to tell you how desperately Jesus wants you to know actual details of what eternity holds. 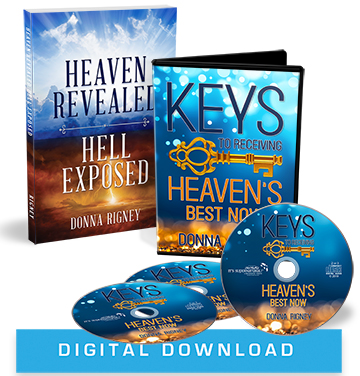 In Heaven Revealed, Hell Exposed (book) and her 3-CD set, Keys to Heaven’s Best Now, Donna reminds you to live in the now of your love relationship with God. Do not let your relationship grow cold and never hesitate to run to Him! Fear, temptation and spiritual emptiness are not your inheritance in Jesus!

Donna simply says Heaven’s best is for now—and for eternity. But pursue it now!

Donna’s close walk with Jesus has yielded revelations for near events too. On her CD, Prophetic Visions for the Future, she shares them so you can prepare. Jesus wants you to know.

Donna Rigney is an author, speaker and pastor of His Heart Ministries International. Donna resides in Florida with her husband Jack. Together they took in and raised 20 children and also adopted four of them. Donna remains active in youth ministry.