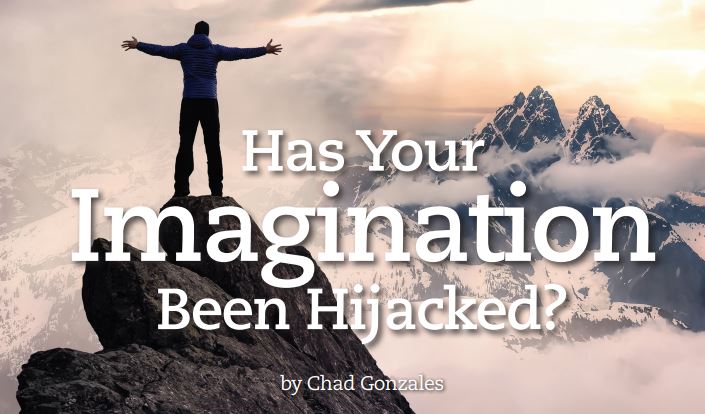 Dear, dear Corinthians, I can’t tell you how much I long for you to enter this wide-open, spacious life. We didn’t fence you in. The smallness you feel comes from within you. Your lives aren’t small, but you’re living them in a small way. I’m speaking as plainly as I can and with great affection. Open up your lives. Live openly and expansively! (2 Corinthians 6:11-13 MSG).

The cry of God for His creation is to live a wide-open, spacious life, free of the limitations of this cursed reality. There is a reason that innately, we identify with superheroes and constantly look for ways to go beyond the limitations we experience with our senses. Instinctively, we know there should be more, but we can’t see it because of the dullness of our hearts.

While others are living according to the world’s reality of death and decay, we can live in the world’s reality and yet live according to an alternate reality—a reality that supersedes that which most of humanity knows: the ability to look at death and yet see life; to look at a mountain and see it as a molehill; to look at a live cancer and yet see it as dead. It was this alternate reality that Jesus came to not only introduce, but also make possible for us to live in, live from, and manifest while alive on the earth.

Jesus’ ministry was not just bringing salvation and revealing the love of the Father, but it was also combatting the impossibilities of the physical realm and showing another world from which to live. Jesus was endeavoring to show His disciples how to live as a son of the blessing as opposed to a son of the curse. This is why when Jesus sent the disciples out to preach and heal the sick, it was to be a manifestation of the Kingdom of God; the alternate realities of Heaven usurping the realities of the cursed world.

When we are born into this world, we are here like everyone else, living in a cursed world—a world dominated and ruled by disease, poverty, death, and impossibilities; a world where we are left to fend for ourselves. All those who have not received Jesus as their Lord and Savior are under the rule of satan, blinded from the truth and imprisoned by the darkness.

When we receive Jesus as our Savior, things radically change for us! God takes us out of the kingdom of darkness and places us into the Kingdom of light.

He has rescued us completely from the tyrannical rule of darkness and has translated us into the kingdom realm of his beloved Son. For in the Son all our sins are canceled and we have the release of redemption through his very blood (Colossians 1:13-14 TPT).

When you say, “I am saved” you are literally saying, “I’ve been delivered from all earthly ills.” You are also saying, “I am healed!” It’s important for us to see that when we were saved, we were rescued completely! This means satan has no power over you. This is what it means to be redeemed!

When we receive salvation, this becomes a spiritual reality for us. However, for it to affect our physical lives, we must begin to change our imaginations.

This I say, therefore, and testify in the Lord, that you should no longer walk as the rest of the Gentiles walk, in the futility of their mind, having their understanding darkened, being alienated from the life of God, because of the ignorance that is in them, because of the blindness of their heart (Ephesians 4:17-18 NKJV).

The Greek word for understanding is the word dianoia which can be translated as “deep thoughts and imaginations.” Essentially, the Apostle Paul is telling us that your imaginations will alienate you from the life of God. Even though the life of God is in you, if you still see yourself as susceptible to the curse, the curse will still dominate you. Why? Because your soul is like a dam. It is the gate through which the contents of your spirit flow into this world.

Contrast this to what Paul was praying for the church in Ephesians 1:15-18 (NKJV):

Therefore I also, after I heard of your faith in the Lord Jesus and your love for all the saints, do not cease to give thanks for you, making mention of you in my prayers: that the God of our Lord Messiah Jesus, the Father of glory, may give to you the spirit of wisdom and revelation in the knowledge of Him, the eyes of your understanding being enlightened….

Paul’s prayer for the church was that our thoughts and imaginations would no longer be darkened like the Gentiles but filled and expanded with light so that we would know the plan of God for our lives, the inheritance in the saints, and the life of God on the inside of us!

In my studies this year, I have been seeing the tremendous importance and the untapped potential of our imaginations to not only see our circumstances the way God sees them, but also how to plug into the things of the spirit. In my healing conferences, we have helped people use their imagination to see into the realms of God and tap into that healing power. As a result, we have seen blind eyes opened, people come out of wheelchairs, joints healed, and a host of other miracles.

This past Sunday, it happened again! At the end of our healing conference in Durham, North Carolina, a woman was brought into the auditorium in a wheelchair. When asked why she was in the wheelchair, she stated that she needed hip replacements in both hips and knee replacements in both knees. She was a Christian, so I decided to help enlighten her imagination so she could tap into the healing power in her spirit.

While she was sitting in the wheelchair, I stood behind her with my hands on her shoulders and began to help her use her imagination. I began talking about Jesus being the Vine and her being the branch; I told her to see His precious life flowing into her body like electricity.

After a few moments, I told her to stand up. We began to walk around the room together and within a minute, she started shouting and took off without me! She messaged me two days later and said she was still pain-free and had no need of the wheelchair!

In Messiah Jesus, you have the faith of God! If you are experiencing some of the curse in your life, it is not because you have a faith problem; it is because you have an imagination problem! Whatever you are most conscious of is what you will automatically put your faith in and whatever you put your faith in is what you will experience—whether good or bad.

Dr. Chad Gonzales has a mandate to bring a supernatural life, filled with miracles, back to the body of believers. Chad is founder and co-director of The Healing Academy along with his wife Lacy. They reside in Tulsa, Oklahoma.

As I write this, the news headlines are ablaze with two different Americas. One is angry and threatening a summer of rage. These Americans have been brainwashed through schools, Hollywood and the secular media to believe that a mother should have the CHOICE to offer her baby as a blood sacrifice on the altar of the god of pleasure. The other half of America believes abortion is murder! Historically, child blood sacrifices to Baal and other false gods and widespread homosexuality precede the judgment of God and the destruction of a nation.

Some feel our ONLY solution is through politics. I will always vote for and promote the best candidates who are pro-life, pro-Israel and for God’s definition of marriage and morality. But the problems in America and the world are beyond politics. After a generation of citizens has been brainwashed against God and the Bible, no political candidate or party can change the course of history. It’s too late—but God!

Just like at the wedding celebration at Cana where Jesus turned the water into wine, God has kept the best wine for last. I call it the GLORIOUS GLORY! It will be more divisive than child sacrifice or homosexuality. Why? Because when the Glorious Glory is poured out, the Presence of God will be as close as God was to Adam before the fall!

When this Glory appeared to Isaiah, the holiest prophet in Israel, he repented and called himself unclean and called all God’s people unclean. He said, My doom is sealed, for I am a foul-mouthed sinner, a member of a sinful, foul-mouthed race; and I have looked upon the King, the Lord of heaven’s armies (Isaiah 6:5 TLB).

Isaiah could have said what I have heard my traditional rabbi say: “I am one of the top ten holy men alive!” But if you or I had come that close to the Glorious Glory, we would be repenting for days! This will be the great division. Some will repent and some will harden. For some, America will be the beautiful and get better and better. Others will go even deeper into sin and darkness! It’s hard to believe America has sunk so low so quickly, but those who refuse to repent will go much lower.

The greatest sign of the Glorious Glory will be deep repentance. This will be caused 100% by God not man. All man must do is get out of the way! We will see the greatest soulwinning revival in history. It will not be contained! Look what 120 accomplished after their encounter with the Glory at the first Pentecost! Now a greater GLORY will be poured out on millions as God’s last act to redeem humanity. This will be God’s finest hour and then the end will come!

My heart’s desire is to have television networks where every show spreads the Glorious Glory 24/7 throughout the world. We own two networks and even now the shows are hosted by people who hunger and thirst for more of God. Covid, cancer and fear will not be able to coexist with the Glorious Glory on our It’s Supernatural! Network (ISN) and Middle East TV Network (METV). Right now, it’s in its infancy but our networks will increase in the Glory day by day, until the whole earth is filled with the Glory of God. Our assignment is to equip you with the Glorious Glory. You will become a spreader of the Goodness of God!

Our free online ISN network is available on every computer and smart phone in the world. Just search for “Sid Roth” in the app store and download the ISN app. METV is available in every home in Israel that owns a television set—and it covers the entire Middle East! With your help, we will put our networks on every satellite in the world.

Rosh Hashanah and Yom Kippur are just around the corner. This is the season we Jewish people pray and fast worldwide for atonement of sin. What if the Glorious Glory shows up on these feasts in churches and synagogues? It’s time to repent. It’s time to pray!