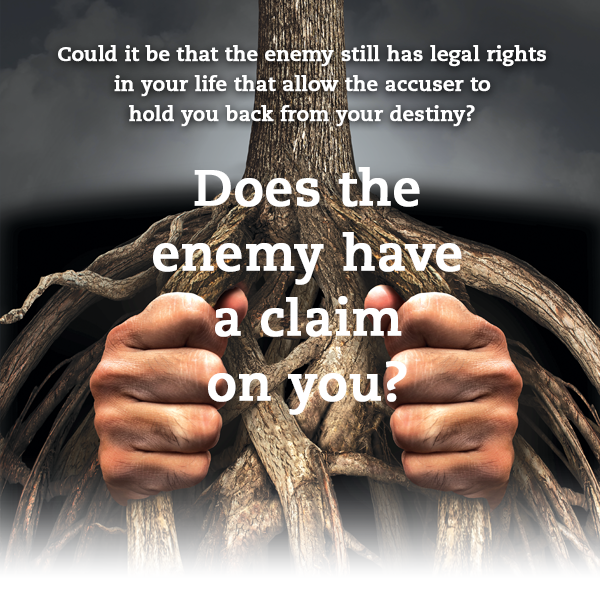 Hrvoje Sirovina studied bloodline curses in Africa, where Christians have been dealing with these curses for generations. Imagine—some ancestor broke covenant thousands of years ago and it resulted in your addictions, marriage and family problems, and even your health issues. Few Christians understand how to break these curses and get set free. Hrvoje took the African Christian teaching, developed prayers and wrote a bestselling book—in German. Now for the first time his book, Redeeming Your Bloodline, is available in English. —Sid

Do you feel like your life is stuck in a vicious cycle? Have you been fervently praying for healing that has not manifested? Are you bound to an addiction that you can’t overcome?

Could it be that you or members of your family are caught in a generational pattern of sin and suffering?

On the cross, Jesus set us free to live a life full of peace, joy and strength! However, in the courtrooms of the spiritual realm, the accuser brings legal claims against God’s people. These charges can prevent us from securing the breakthroughs Jesus has already purchased on our behalf.

The solution is to spiritually cleanse your bloodline through prayer, dissolving unholy covenants (i.e., adultery and other sexual sins) and claims that existed since Adam and that influence our lives. When we pray bloodline prayers, we actively apply the power of the cross.

We have received many testimonies over the past decade confirming that praying over your bloodline brings breakthrough and healing. Here are three examples:

A man dealing with an irregular heartbeat for years, and who had received much prayer in the past, was immediately healed after he read my book and prayed the bloodline prayers.

A young man had an accident that had severely damaged his brain. For days, the doctors fought for his life, but lost all hope. When his family came to the hospital to say goodbye, his wife asked for prayer and we dealt with his bloodline. That same day, the young man supernaturally started to recover, came out of the coma and was released from the hospital to rejoin his family. Since then, he and his wife had another child, he works a regular job, and loves Jesus very much!

A woman was being mocked at her job by three colleagues. Even after some prayer, nothing really changed. We then prayed for her bloodline and answered the accusations of the enemy. Within a week, one of the ladies apologized to her, the other two quit their jobs, and, shortly after, she was promoted to a leadership position.

Going All the Way Back!

Bloodline prayer is required for areas in our lives about which you could say we have “inherited” them from generations before us. It is about covenants, contracts and iniquities that have been handed down to us by our forefathers. These have the power to hinder us naturally and spiritually despite our salvation. They prevent us from overcoming and from spreading the Kingdom of God around us.

You may think, “No, this is not possible. Jesus has delivered us from all of that.” And that is true. But there are areas in our lives in which the completed work of Messiah Jesus is not immediately made manifest through our salvation. Everything Jesus accomplished belongs to us 100 percent. Now we have the power to bring those things into manifestation in every area of our lives, and it has to be done by force (see Matt. 11:12).

Three Tenses of Salvation in the Bible

We should pay special attention to the tenses being used for the doctrine of salvation in the Bible.

We find Scriptures like Titus 3:5, where the Bible clearly says that we were saved (past tense) by God’s mercy. This verse clearly speaks about a fact that has happened and has been completed in the past.

Yet we read in 1 Corinthians 1:18 that we are being saved (present progressive tense) through the preaching of the cross. So here salvation is described as a process that continuously happens.

The Bible also speaks about another salvation that undeniably is going to take place in the future. It is described in 1 Peter 1:5, where it is called a “salvation ready to be revealed in the last time.”

The day we receive Jesus into our hearts, our spirits are revived and born of God. Yet there are still two parts of us that need salvation—our soul and our body. Jesus said that our spirit is willing, but our body is weak. The Apostle Paul describes in Romans 7:21-24 how his inward man, his spirit, delights in the law of God, but there is another law in his members, which is the law of sin. He goes on to describe that he does things he doesn’t want to do and that he doesn’t do things he wants to do.

You see, even though Paul was clearly saved, he still needed salvation in other areas of his being—like we do, too.

God wants our whole being to be sanctified, purified and saved!

It’s About Authority, Not About Salvation

There is no need to pray about your bloodline to receive salvation. Salvation is a result of your faith and your
confession of your faith. But the cleansing of our bloodline allows us to be placed in a position of authority that God desires for us to have—an authority and position we need to take for the sake of the Kingdom of God to expand it here and now.

Authority is something that has been given to us up to a certain degree, but if we want to increase our authority we have to grow into it. God wants each one of us to live up to the full potential of the authority we are called to. Yet many times we may be called to something, and in spite of our passion and love for God we never reach it. One of the reasons could be that the enemy still has legal rights in your life that allow the accuser to hold you back from your destiny.

Even if we have a right to the promises of God, positioning ourselves in the wrong way and having iniquity in our lives can disqualify us from receiving them.They won’t have any effect on our lives.

God has given us commandments that are a blessing to us. But if we do not align ourselves to them, it can cause a lot of frustration because we do not see the effects of the authority God intended for us to have. This is the reason we want to submit and humble ourselves under the mighty hand of God—so He can lift us up in the presence of our enemies. May the enemy find no rights that allow him to stop or hinder the expansion of the Kingdom of God that is supposed to happen through us.

The more we grow in authority, the more dangerous we become to the devil. That’s why things in our bloodline that have not been searched out before now suddenly become relevant. But as we pray over our bloodline and dissolve all claims of the enemy, we will be released into truly living the life we are called to live!

Hrvoje Sirovina and his wife, Ise, are founders and leaders of an apostolic-prophetic congregation in Germany, as well as an international ministry called HIS Ministries.

The Greater Glory has started!

Once more God will pour out His Glory on the Jewish people in Israel to ignite the greatest revival in history: Arise, Jerusalem! Let your light shine for all to see. For the Glory of the Lord rises to shine on you. Darkness as black as night covers all the nations of the earth, but the Glory of the Lord rises and appears over you. All nations will come to your light… (Isaiah 60:1-3 NLT).

Why do I call this the Greater Glory? Because Haggai 2:9 describes it as Greater than the Glory in the first
Temple: The GLORY of this LATTER house will be GREATER than the FORMER, says the Lord of Hosts.

What is the purpose of this Greater Glory being poured out on Israel? The same reason as before—to evangelize
the Gentile: Thus says the Lord of Hosts: In those days ten men from every language of the nations will take hold of the garment of a Jew, saying, “Let us go with you, for we have heard that God is with you” (Zechariah 8:23).

God’s passion is for ALL to be saved. First Timothy 2:3-4 says, God our Savior… desires ALL men to be saved and to come to the knowledge of the truth. This Greater Glory is God’s last effort to evangelize the world. Sadly, not all will accept this mercy, but I see entire cities and even countries being saved!

This Greater Glory will be like no other we have seen in history. Paul says the restoration of Jewish people to the Body of Messiah will release resurrection power. In Romans 11:11- 12, 15 (Passion paraphrase Bible) Paul writes, So, am I saying that Israel stumbled so badly that they will never get back up? Certainly not! Rather, it was because of their stumble that salvation now extends to all the non-Jewish people, in order to make Israel jealous and desire the very things that God has freely given them. So if all the world is being greatly enriched through their failure, and through their fall great spiritual wealth is given to the non-Jewish people, IMAGINE how much more [great spiritual wealth] will Israel’s awakening bring to us all! For if their temporary rejection released the reconciling power of grace into the world, what will happen when Israel is reinstated and reconciled to God? It will unleash resurrection power [life from the dead] throughout the whole earth!

This Greater Glory has started, but we haven’t seen anything yet! The coming year will see the Greater Glory released like the trickle of water coming out of the Temple in Jerusalem that becomes a mighty river of God’s Greater Glory (see Ezekiel 47). I love the fact that in Ezekiel 47:9, every living creature…wherever the rivers go, will live. And there shall be a very great multitude of sh [symbolic of souls]…. Thus everything shall live WHEREVER the river comes.

What is the best way to be a carrier of this Glory? DO NOT SEEK THE GLORY! Instead, SEEK THE LORD while He may be found. The Glory will be an automatic result from the intimacy you develop with God.

I began praying in tongues one hour a day and then listening for one hour. I listen for one hour to receive what God has for me. The prayer stills my mind so I am open to hear! You might feel one hour of prayer is too hard. So start with 15 minutes a day.

This is why I designed my new prayer app, GodTalk. It is designed to give you accountability. I have found this accountability makes me more apt to pray when I don’t feel like it. If we don’t become a praying people, we will not become a powerful people! For the free app, search for “Sid Roth’s GodTalk” in your app store.

Please consider an investment to help us reach the Jew to reach the world! God has a double reward for those who facilitate Jewish salvation. First, Solomon, the wisest man who ever lived, said in Proverbs 11:30, he who wins souls is wise. The only thing we take to heaven is souls. And those who win Jewish people to the Lord and support those in front-line Jewish ministry share EQUALLY in the rewards of Genesis 12:3. God Himself promises to bless those who bless the Jewish people. The GREATEST BLESSING IS SALVATION! How much more at this set time to favor Zion to release the greatest harvest of souls in history!