Once we become aware of what Messiah has made available to us, we need to take the final leap of faith into our inheritance.

Can you change your DNA?
By Dr. Francis Myles

Halfway through my sermon in a crowded auditorium near Pretoria, South Africa, the glory of God descended and an explosive word of knowledge rose mightily inside of me. “There is a woman here; you have just seen an open vision of Jesus. He is carrying a bowl of blood. I see Him pouring it over your head. The Lord says, you are free, right now! Where are you?” I asked. An older woman ran to the front screaming at the top of her lungs.

She told us that she had brought her 28-year-old niece, who became insane when she turned 18. During the ten years of her insanity, she had never spoken one intelligent thing. But when I gave out the word of knowledge, something supernatural happened. The insane niece saw Jesus in front of her, with a bowl of blood in His hands. She told her baffled, but equally joyful aunt, that Jesus smiled at her and then poured the bowl of blood over her head. Then He said to her, “Daughter you are free!” Immediately her mind was restored. She turned to her aunt and began to talk to her intelligently.

Your blood has a voice

Most followers of Jesus do not know that it is now an established scientific fact that blood carries a distinct sound frequency. This should not surprise ardent students of the Word, because in Genesis we are told that all life forms were created by a distinct sound generated in an atmosphere charged with glory. The “sound” was the spoken Word of God! This sound frequency that God injected in all of creation is what gave the blood its distinctive “voice.” Anything with the ability for “voice” is capable of speech or utterance.

When Cain killed his brother, it was the voice of Abel’s blood that carried the cry for vengeance to the throne of God. While the blood of righteous Abel was screaming for vengeance, the devil had more than ample legal grounds to visit Cain’s bloodline with destruction. This is one of the best examples of a generational curse. Many Christians are struggling because the enemy has legal grounds to cause havoc in their lives through the “highly compromised ration of genes” that they inherited from their ancestors.

A couple of years ago the Messiah appeared to me and said, “It’s time for my people to experience genetic salvation.” “What is genetic salvation?” I asked. “Genetic salvation is when the finished work of the cross is applied to heal the broken down genetics of My people delivering them permanently from generational curses attached to their natural lineages.” I was stunned. “I want you to write a book titled, Breaking Generational Curses Under the Order of Melchizedek. I will show you how My Melchizedek priesthood contains the answer to the breaking of generational curses and the healing of genetic anomalies.” Examples of these generational curses include poverty, mental illness, emotional issues and all types of diseases.

This passage vividly describes the sad state of affairs that are inherent in all human bloodlines generated from the first Adam. Since the fall of Adam and Eve, their pure bloodline and flawless genetic sequence has been corrupted beyond repair. If God had not provided a Savior capable of restoring a perfect bloodline and genetic sequence here on earth, we would all wallow like pigs in our own corrupted gene pool forever. Many Christians do not know that Jesus has His own GENE-RATION (“ration of genes”) that He brought to the earth (Isaiah 53:8). A generational curse is a “curse attached to the ration of genes a person received from his or her ancestors.” The Messiah’s ration of genes has no curses attached to it because there is no sin attached to His genetic ancestry. His genes came directly from the Heavenly Father, just like the first Adam before he fell.

Ezekiel 16:6 is a moving prophetic picture of Jesus reaching out to the human race while it was drowning in its own polluted blood. How can a person drown in his own blood? The Lord showed me that ever since the fall of Adam there is no healthy bloodline here on earth that men can hold onto to stem the tide of generational iniquity passed down by the forefathers. I have prayed with well-intentioned Christians who were drowning in the iniquities attached to their bloodline that kept robbing them of life-altering opportunities. But these same believers experienced dramatic changes after I prayed with them over the subject of breaking generational curses. Jesus wants to stop you from drowning in your blood. He wants to say to you, “Live in your blood!” How will the Messiah accomplish this? By giving you a supernatural blood transfusion and separating you from the corrupted bloodline of your natural ancestors. He will stop the drowning by superimposing His flawless genetic bloodline over that of your ancestors.

The blood of Jesus speaks

To Jesus the Mediator of the new covenant, and to the blood of sprinkling that speaks better things than that of Abel (Hebrews 12:24).

Since Jesus rose from the dead, His blood has been “speaking of better things” than the blood of Abel. Instead of crying for vengeance, the precious blood of the Messiah cries for mercy, healing, deliverance, forgiveness, blessings and restoration. I wrote my book to help believers appropriate the benefits of genetic salvation. The Messiah’s blood was shed not only to cleanse us from our sins but also to give us access to a new and flawless “ration of genes.” He can reconfigure or reconstruct our DNA and fix any anomalies in our genetic sequence by the supernatural imposition of His divinity upon our humanity. Jesus can help us break free of years of generational iniquity and enter into a glorious inheritance. You can recapture God’s original prophetic DNA for your life!

Jumping over the prophetic bloodline

When the Messiah was downloading the spiritual method for breaking generational curses, He showed me a vision. A group of people were standing in front of a line and then jumping over it. He told me that the line on the ground was a prophetic enactment of the natural curse-infected bloodlines that His people had to renounce and jump over in order to identify with His holy flawless genetic bloodline. Once we become aware of what Messiah has made available to us, we need to take the final leap of faith into our inheritance.

A woman named Verna hobbled into one of my meetings desperate for healing. For over 12 years, rheumatoid arthritis had settled into her right knee and leg so severely she begged God to rip her leg off. This is her story:

I had lots of bad stuff clinging to my natural lineage but had never found a way to release it. The daily emotional trauma and the pain were so devastating that even the slightest thing could bring about a flood of tears.

My healing came as a result of understanding Dr. Myles’ message. This is one of the best teachings I have ever heard! After he finished teaching, he asked everyone in the church to stand in front of a (red ribbon) line, which he said would be a prophetic representation of our sin-ravaged natural lineages. Then he took us through a time of renouncing our allegiances to our natural lineages, in favor of the Messiah’s prophetic bloodline. After the prayers of renunciation, he told us to jump over the line on the floor representing our natural heritage, while he asked God to destroy every generational curse and infuse us with Jesus’ flawless DNA. Not only is all my pain gone since I jumped over the line, but now I can dance with my poodle, Jeremiah. Giving up was not an option for me and neither was removing my leg. God had a better way. 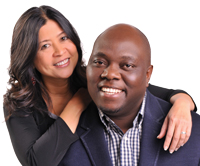 When people hear this teaching, their faith is built up so that when they “jump the line,” miracles occur. Thousands have prayed the prayer, jumped over the prophetic bloodline and experienced physical, mental and emotional healing. So can you!

Dr. Francis Myles is an Apostle to the nations and senior pastor of Royal Priesthood Fellowship Church in Tempe, Arizona. He is happily married to the love of his life and ministerial partner, Carmela.

The favor (grace) of God has been turned up in our ministry. I believe it is because we are not politically correct. We are not seeker sensitive. God knows I am more concerned for His reputation than mine. I know that without Him I am nothing.

I will put whatever God tells me on the air. He knows I will not compromise. We are warned that in the last days men will be lovers of self, lovers of money, unholy and lovers of pleasure rather than lovers of God. We are warned sin will be rampant everywhere, and the love of many will grow cold (2 Tim. 3:1-4, Matt. 24:12). 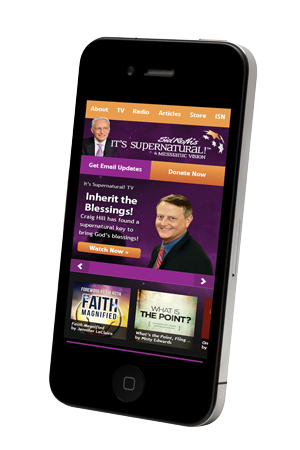 God has entrusted us with a major end-time communications network. By faith, we signed contracts and now have launched ISN — the It’s Supernatural! Network (SidRoth.org/ISN). We will have over 400 of our archived shows plus our new shows, mentoring segments and worship segments available on smart phones, iPads and computers worldwide 24/7! Imagine watching ISN in high definition on your smart phone. I can even speak prophetic words and warnings live on our global network.

Over the past year, we have had over 6.5 million visits to our website: SidRoth.org. Imagine how rapidly our new network will expand worldwide.

Our network will be free and have no telethons or high-powered fundraising. Gradually, we will add programs that are a voice for the next move of God’s Spirit, not the old manna.

With this in mind we have just changed our website to reflect the expanding information explosion. It is now “mobile friendly.” On your smart phone, the radio and television programs will be even more accessible, including several years of archived shows. Let me know if you enjoy our fresh new design.

We recently added to our team Joe Marcus, a young man with an M.A. in Communication Studies, specializing in social media. Have you noticed the changes on our Twitter and Facebook pages?

I refuse to let the devil be the best in these new communication technologies.

Our television show is now being dubbed into Spanish in a process called “sync dub.” This means it is not produced with voiceovers or subtitles, but looks like my guests and I are actually speaking Spanish. It is scheduled to be all over the Spanish-speaking world in October. We will offer on the shows my Jewish evangelistic book, They Thought for Themslves, in Spanish.

This month we observe the Jewish High Holidays. God calls these feasts His “appointments.” This is why I call them a portal for answered prayers and favor. God tells us at these set times, “No one is to show up in the Presence of God empty-handed; each…must bring as much as he can manage, giving generously in response to the blessings of God…” (Deut. 16:16-17 Message).

May the tangible favor of God overtake you as you share in reaching Jewish people worldwide and equipping Christians to be “normal”!

Newsletter Teaser
Can You Change Your DNA?
Title
September 2013 Newsletter