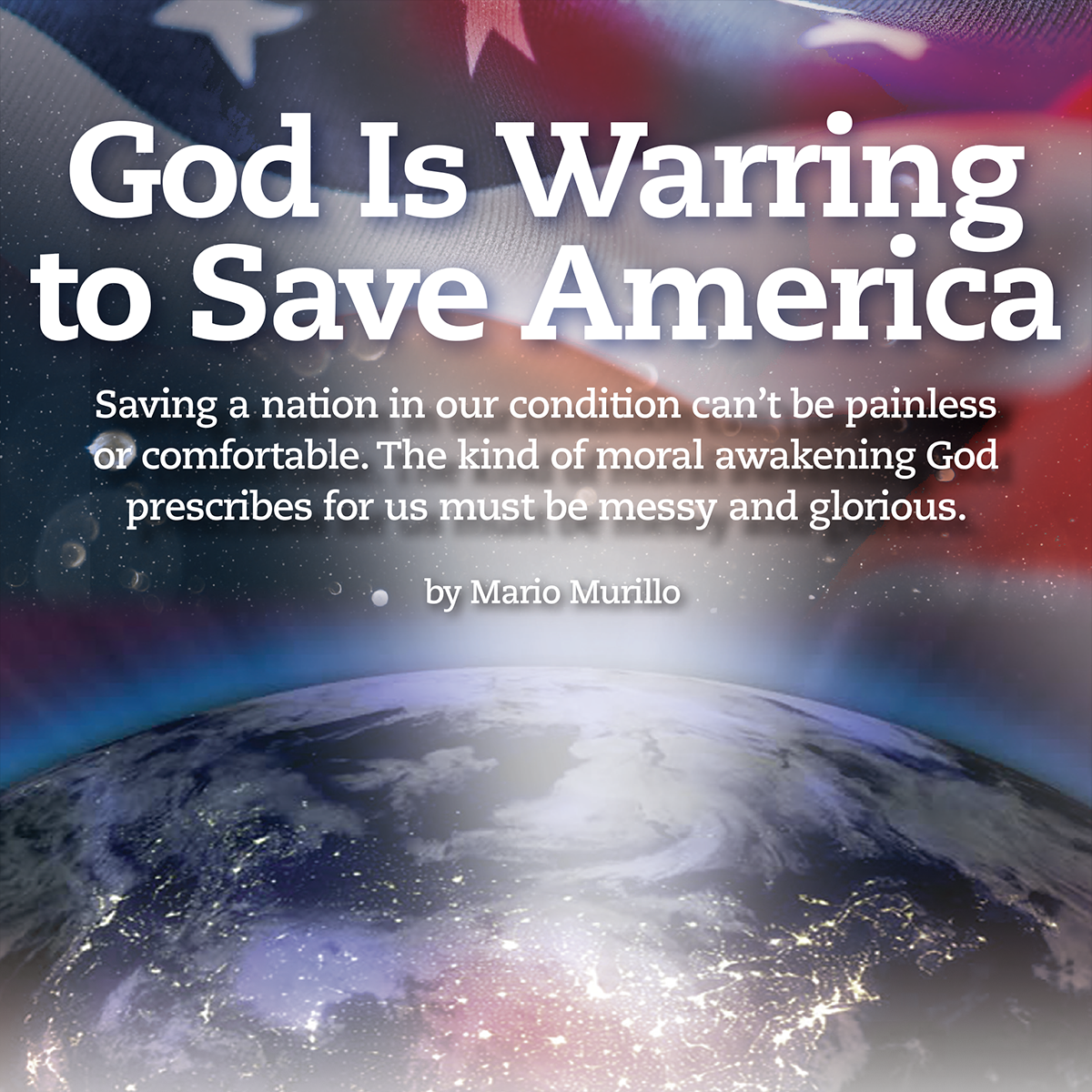 In a last-ditch effort to save America, God will pour out His Spirit. Are you ready?

Did you ever wonder why God doesn’t do something? You see America being torn apart, battered into submission,
and molded into some ugly weak version of her former self. When those at the moral bottom of society become the loudest voices of influence, shouldn’t God act?

I believe He is acting, but in a wholly unexpected way. He is at war to save our nation. The real question is, Are you ready to understand what your assignment is in this war?

In a last-ditch effort to save America, God will pour out His Spirit. It will not be within the “system,” but outside celebrated circles. It will restore many Spirit-filled Pentecostal churches from entertainment centers back to a movement. Many small churches will become ground zero for the Glory of God.

The next revival must topple man-made religious empires led by those who are traitors to their original calling. It must raise up those unknown and not esteemed to places of power and influence.

Saving a nation in our condition can’t be painless or comfortable. The kind of moral awakening God prescribes for us must be messy and glorious.

In the lead-up to this miracle, God is working on two sides of the street. On one side is the Lazarus Generation and on the other side is a prophetic core.

Out of spiritual graves in the inner city and on campuses nationwide, the Lazarus Generation will rise. Today they are in gangs, on drugs or screaming for leftist revolution. Then, in a way no man can take credit for, they will be struck by the resurrection power of Messiah. Tomorrow, they will be baptized in the Holy Spirit and operate in frightening zeal.

Meanwhile, the prophetic core wanders, feeling outside the mainstream. They have been ostracized for wanting revival. They have huddled together to pray and compare notes. They are starved for the fire, glory and presence of God. They feel helpless and forgotten, but in their weakness, they are being made strong.

At the moment of power, these two groups will collide. The core that yearns for revival doesn’t know they are being forged to be the fathers, mothers, brothers and sisters of resurrected youth.

The Lazarus Generation will find CHURCH—AS WE KNOW IT TODAY— UNBEARABLE. Only this radical core will understand from their own brokenness how to “loose them and let them go.”

You may remember the Jesus Movement. As older Christians were receiving the Baptism of the Holy Spirit and leaving mainstream denominations, hippies, addicts and campus radicals were being saved.

The hallmarks of that revival were acoustic choruses and a message of unconditional love. This reflected the gentle love matrix of the hippie movement.

Jesus is depicted in Scripture as both Lion and Lamb. The Jesus Movement expressed His Lamb nature…now comes the Lion. The plaintive cry will give way to the prophetic roar. Young lions will emerge who will fulfill God’s promise as referenced in Joel 2:28, “I will pour out My Spirit on your sons and daughters and they will prophesy.”

Whereas the Jesus Movement was marked by the gift of tongues, we will now see tongues of fire and prophecy, speaking truth to power with paralyzing conviction.

America’s imminent destruction is now clearly in view. God is waging a war to save us. My passion is to understand what He is doing and to find my role in His miracle.

I am an evangelist. I am not a prophet. In 2012, God ordered me to write a blog about America’s political situation. I loved the life I had before that blog. I was busy winning lost souls and seeing wonderful miracles of healings in some of our nation’s worst areas.

As soon as I began to expose leftist forces in government, I was attacked. But because God was behind the blog, millions grabbed hold of its message.

Now America is sinking and suffocating in a mire of God-hating ideologies.

So, what is God doing about all this? Since America was a miracle from the beginning and the teachings of Jesus influenced our creation, God will not let America die without mounting an astounding counter-attack on evil. He is warring to save America through nothing less than a massive moral awakening.

We are at war. If you name the name of Messiah Jesus, you are in this war. That you can’t see it or feel it doesn’t make it any less real—or any less dangerous. The question is, Do you know how God is fighting and do you know your assignment in this act of God?

The Holy Spirit is amassing an army. The first signs are frustration and agitation. Praying people will feel out of sorts. Their turmoil will lead to an experience in the Glory of God.

It begins with a renewed relationship to the Holy Spirit and greater intimacy with the Messiah. You will advance to an understanding of flowing in true signs and wonders and not the sad emotional imitations.

From there you will find your assignment in God’s war to save America. Your task will overtake you with blazing clarity. It will be a mission that commands all of your talents. It is an endeavor you can easily see yourself doing for the rest of your life.

Note from Sid: Mario is a forerunner of what is beginning to happen right now. He is an example of how to be normal in this next move of God’s Spirit. Someone gave him a tent worth about $100,000 and 1,000 chairs. The Lord opened the door to put up the tent in Fresno, California, a city with one of the most violent gangs in the world. When Mario set up the tent, people told him no one would show up. But God miraculously filled the tent and began to heal the sick. Mario shares just one testimony from those tent meetings below.

I’m going with Jesus all the way.

Joe, kneeling at left, was a 19-year-old drug addict, introduced to heroin by
his parents. He was driving to his pizza parlor job on a highway that went right by our tent when a voice said to him, “Get in that tent.” He pulled off the road and called his boss to tell him, “I can’t

come to work today, I’ve got to get in this tent.” His boss said, “If you don’t show up you will be fired.” So he responded, “Well, I guess I’m fired because I’m going in that tent.”

Joe arrived about 4:30 p.m. and we had to start the meeting early because the tent had already filled up. I walked out and I kept looking at this young man. And just like that, the Holy Spirit downloaded to my mind: cirrhosis of the liver…failing kidneys…heroin addiction…he’s not saved. So I walked to Joe in front of all the people and said, “Young man, you’re addicted to heroin aren’t you?” He nodded his head very humbly. And I said, “You have kidney failure, cirrhosis of the liver and hepatitis C.” He acknowledged all of it and the Lord healed him! Then I led him in the Baptism of the Holy Spirit.

Four months later we saw Joe after he had gone through discipleship training. He said, “I’m going with Jesus all the way.” And we’re going to get a million more like Joe!

There’s no better way to bless the Jewish people than with salvation!

I am on a plane headed home from Odessa, Ukraine. I was there for one of my “Lecture on the Supernatural” Jewish outreaches. Odessa is a very unique city. Fifty percent of the population has Jewish ancestry! The historic concert hall was packed with a thousand people— mostly Jewish non-believers.

Many are curious how we get so many unsaved Jewish people to attend our meetings. Each event is different. God has given me the most amazing strategies custom-made for each location. In Odessa, I partnered with two amazing churches and did the following Jewish promotion:

• 20 workers stuffed envelopes with letters and invitations and mailed them to 10,000 people.

• 5,000 copies of my testimony book were printed in Ukrainian.

• We also advertised the event with two very large banners (18’ by 9’) with my picture. One was displayed next to a banner promoting a KISS tribute concert (see picture on the right).

Why would I want my banner to be displayed next to one for a rock concert? Because their fans are the exact young people that I want to reach with the Gospel. And we were pleased to see so many young people attend our meeting and receive the Lord.

The hero of everything I do is Jesus! He is the One who gives me wisdom on where to go and how to handle every
outreach. If He did not show up at my meetings, few unsaved Jews would even stay when they find out I am speaking about Jesus. Not only do most stay the entire meeting, most make public confessions that Jesus is their Messiah! For instance, at the Odessa outreach, nearly 1,000 people stood up and proclaimed Jesus as their Lord!

At the start of every meeting, God usually demonstrates He is in the auditorium. I advertise ahead of time that there will be miracles. I can’t heal anyone. But because I operate in the Greater Glory, sometimes as many as 60 percent of the unsaved Jews are instantly healed! I have nothing to do with the healing. God does it all! Once they see so many miracles, I have their undivided attention. Then that same Greater Glory causes their hearts to open to the Gospel!

But as good as the results are, the follow up is the most important part of our outreach. In Odessa, we are hosting events at our partnering churches within the first 7 to 30 days after the meeting. We have 12 follow up events planned. I expect many of the future church leaders of Ukraine (and then Israel) to come out of this outreach.

I’m reminded of the great evangelist Hudson Taylor. God called Hudson to be one of the first to preach the Gospel in heathen China. Today, because of his efforts, China has the fastest growing underground church in the world. They have over 300 million Christians (the lowest estimate I could find). Hudson had a secret. Every time he would open up a new region in China, he would write a check to a Jewish ministry. And He would always write on the check Romans 1:16, which says, “For I am not ashamed of the Gospel of the Messiah, for it is the power of God to salvation for everyone who believes, FOR THE JEW FIRST…” (NKJV).

Based on this Scripture, I go further than humanitarian Jewish ministries. I offer the people something money cannot buy. I show them how to have experiential knowledge of God! I live for going to the Jew first because it will trigger the greatest Gentile harvest in history!

I feel the pleasure and favor of God on my life and I know the favor extends to those who partner with me. I have two more Jewish outreaches scheduled in different countries in the next few months. May the blessings of God overtake you because of Genesis 12:3: “I [God] will bless those who bless [the Jewish people] and curse those who curse [them]; and in [them] all the families of the earth shall be blessed” (MEV).

I pray God’s pleasure, favor and Greater Glory on you and your house!