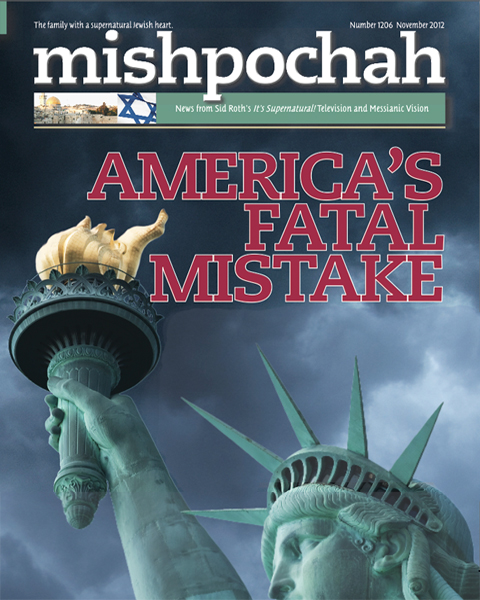 God has something to say about America’s ways and her relationship with Israel.

Dear Mishpochah,
I consider John McTernan to be a modern day Old Covenant prophet. He carries an end-time warning from God. Those who heed this word from heaven will be blessed in finances, family, health and intimacy with God. Those not on God’s side at this moment in history will miss the last move of God’s Spirit and, worse, go into further heresy. Find out what you — and America — can do to bring blessings instead of curses!  — SidAmerica’s Fatal Mistake
By John McTernanOctober 1987 was a dramatic time in my spiritual life. On
October 11th, there was a massive homosexual march on
Washington, DC. Upwards of 500,000 marched for their
“rights.” As I watched this on the news, it upset me, and I
turned the TV off and walked away. It didn’t occur to me to
intercede before the Holy God of Israel. I never thought that He
might be judging the nation. Then I forgot about the march.The following week the stock
market went into a sharp
decline resulting in a massive
508-point loss
on October 19th. During
the six business days
following the march, the
stock market lost a third
of its value. That evening
I was watching the news
and the newscaster was
actually shaking as he
was asking whether this
could be the beginning
of a new Depression! As
I watched him shake,
I had a vision of the week before when I
saw the homosexual march. Then the Lord
spoke to me in a very clear and powerful
way and tied the stock market crash to the
homosexual event. The United States had
come under a curse.
I then heard the Lord say that I did
not fear Him, for if I had I would have
cried out and interceded before Him
when I saw the march. He said that His
church did not fear Him, and America
was naked before Him for judgment.
This was the first time I truly realized
what the real fear of the Lord was, and
the holiness of God. I fell prostrate on the
floor before Him and repented.October 11, 1987 was a turning
point in God’s dealing with
America. Sin was openly manifesting
itself, and God’s judgment on the nation
was matching it. From October 19th
forward, until today, God began to show
me the correlations between national
sin and the greatest disasters in history
hitting America. These disasters included
Hurricane Andrew, the Northridge
Earthquake, the attack on 9/11, Hurricane
Katrina, the stock market crash of 2008,
and the massive Joplin tornado storm. All
these events and many more happened
while America was promoting the dividing
of Israel, abortion or the homosexual
agenda. The judgments that started on
October 11th paralleled America’s rebellion
and turning from God to sin.

God next touched
the abortion
rebellion two
years later. On
October 15, 1989, a
huge pro-abortion
rally took place in
San Francisco. The
San Francisco Chronicle
reported: “Marching to
a pounding drum and
chanting, ‘Hear our
voice we’re pro-choice,’
yesterday’s crowd gathered at City Hall
after passing cheering supporters lined up
along Market Street.” The center of the rally
was City Hall where many pro-abortion
politicians addressed the crowd.
Just two days after this festive rally,
celebrating the killing of innocent children
in the womb, a powerful 7.1 earthquake
struck near San Francisco. This quake
actually hit during a World Series baseball
game. Ironically, The San Francisco Chronicle,
reporting on the effect of the quake, said
that City Hall was shaken so terribly that
people fled the building screaming in
terror. The very center of the festive, pro-
abortion rally became, just two days later, a
center of terror and fear!

God then touched America for trying
to divide the land of Israel. On October
30, 1991, President George H.W. Bush
initiated the Madrid Peace Process. The
object was for Israel to divide its land to
create a Palestinian state in return for
peace. This is a very serious violation
of God’s Word about the land. On this
very day, a super powerful storm in
the North Atlantic came against the
normal weather patterns and battered
the East Coast. It became known as the
Perfect Storm. This storm sent 30-foot
waves against the President’s home
in Kennebunkport, ME, and inflicted
serious damage!

God was using catastrophic events to
warn the nation of the collision course that
it was on with His holiness. God always
warns before judgment.
God used Noah to warn
for 120 years before the
judgment. He used the
prophets for 200 years
before He judged the
ancient Jewish people.
The Lord Jesus warned
Israel of the coming
destruction 40 years
before it happened. Now
once again, God was
warning a nation before
the final judgment. The warnings were
directed at His people to repent before
Him and cry out for an outpouring of the
Holy Spirit upon the church and nation. So
far, very few in the church are listening.

When two national rebellious
events occur simultaneously, the
judgment becomes catastrophic.
Hurricane Katrina is a prime example.
To date, this hurricane has been the
greatest natural disaster to hit America.
Hurricane Katrina hit right around the
time that America was forcing Israel
to divide its land and at the time of
a national homosexual event in New
Orleans called Southern Decadence.

In 2005, President George W. Bush had
pressured Israel to unilaterally pull out
of 25 settlements, most of which were
in Gaza. The last Israeli left Gaza on
August 23th, which was the very day that
Katrina became a hurricane! A few days
later on August 28th, it slammed into
New Orleans as a Category 3 hurricane
and did catastrophic damage to the
Gulf Coast. This was the same week as
Southern Decadence, when up to 150,000
homosexuals flocked to New Orleans
for real decadence in the streets. The
homosexual event had to be cancelled.

Exactly seven years later to the day
on August 28, 2012, Hurricane Isaac
slammed into New Orleans during
Southern Decadence. The hurricane
caused tremendous damage to the area
and cancelled Southern
Decadence for several
days. The homosexuals
vowed to continue even
with all the destruction
around the city.

The God of Israel
has issued two
clear warnings to
New Orleans and
America about open
manifestations of
homosexuality and
rebellion in the cities of America. The
sin of America, just like Sodom, now
has the attention of the Lord, as it is
offending His holiness. He is warning
His church to pay attention.

In May 2011, God gave perhaps
His clearest warning to America
about dividing the land of Israel and
touching Jerusalem. On May 19th and
22nd, President Barack Obama gave
speeches outlining the United States
policy regarding the borders of Israel.
The position was
that Israel had to
pull back to its pre-
1967 borders. This
meant making Israel
defenseless and
dividing Jerusalem.
During the May 19th
speech, there was
record flooding as
the Mississippi River
overflowed its banks
and flooded millions
of acres of farmland. On May 22nd,
President Obama again made the same
speech, and a mere seven hours after
this speech Joplin, Missouri was struck
by a tornado that destroyed much of the
city. It actually cut the city in half just
as President Obama was trying to do to
Israel. (For more information on these
disasters see the 3-DVD Series America’s
Fatal Mistake offered below.)

Awesome judgment fell again
on September 11, 2012. President
Obama told Israel that it was on its own in
fighting Iran. This was after the President
had publicly stated many times that he
would always be there to defend Israel. On
September 11th, he also
refused to meet with
Israel’s Prime Minister
Benjamin Netanyahu
when Netanyahu came
to the United States. He
abandoned Israel and
then humiliated the
Prime Minister.

On this day Muslim
terrorists in Egypt and
Libya attacked the U.S.
Embassies killing the
ambassador to Libya and also destroying
the U.S. compound. In Egypt they
overran the Embassy and tore down
the American flag replacing it with the
Muslim Brotherhood flag and shouting,
“Allah Akbar.”

On the same day, Moody’s threatened
to downgrade the U.S. credit rating very
soon if the national debt was not brought
under control.

On the very day that President
Obama turned his back on Israel, the U.S.
was attacked by Muslim
terrorists who killed the
U.S. ambassador! This is a
perfect example showing
that what America does to
Israel comes directly back
on America. This one
was to the very day!

Each presidential
election has
enormous
consequences
since the
President’s
treatment of
Israel can bring a
blessing or curse
on the nation. If the
President pursues a policy
of dividing Israel, it brings
a direct curse on America.
Americans have elected
such Presidents and the
nation has suffered from
the curses.

God is holy and we
must walk in the fear
of Him. This means we
must realize that He will
destroy America for the road
of rebellion the nation is on.
Since God does not change,
we must change. Our only
hope is to intercede and cry
out to the Lord for mercy
and an outpouring of His
Holy Spirit.

The Prayer of Hezekiah. Hezekiah was told by the Prophet Isaiah, “Set your house in
order, for you shall die.” Then Hezekiah humbled himself,
wept, and reminded God of the good he had done for God’s
Kingdom. God heard Hezekiah’s prayer and extended his life
15 years (2 Kings 20:1-6).

We need God’s mercy on America. As you remind God
of the seven major ways America has been a blessing (see
below), believe God will have mercy and give us more time
to proclaim the gospel in America and throughout the
world. Pray this prayer every day before the presidential
election to remind God:

Lord our nation has been a blessing to You and Your Kingdom. I call to Your
remembrance these seven blessings:

1. America was the first Gentile nation to acknowledge that our rights come from the
Creator. George Washington acknowledged the God of Israel created America.

2. For decades, America has been the number one supporter of world missions.

3. America ended slavery in its land.
4. America stood tough and voted for Israel to be a Jewish homeland.

5. America has been a place of refuge and religious freedom for the Jewish people and others.

6. America has led the fight for the oppressed worldwide.

7. America continues to be the number one source of humanitarian aid around the world.
Lord, elect a President and members of Congress who will lead our nation in repentance
and revival.

Lord, give us more time to proclaim Your gospel to our nation and the world.
In Yeshua’s name, Amen.

If we do not vote, we will lose our nation. It is not necessary for a candidate to be a Christian for
me to vote for them.

I vote on three biblical positions. Why just three? Because any of these three sins, in the
past, caused God to allow a nation to be destroyed.

I believe when you vote for a candidate who approves of killing children in the womb as
a sacrifice to the god of pleasure, who is in favor of legalizing homosexual marriage or who
says Israel should divide up the land God leased to the Jewish people “forever,” you are as
responsible as the politician on judgment day.