Healing for a Broken Heart

When someone is injured in an accident, they are rushed to the hospital for emergency treatment. Their broken bones and physical injuries are treated by the doctors. But who cares for the spirit and the soul?

For it’s not just the body that is traumatized by the experience — our inner being suffers also. Many people have had trauma throughout their lives that have left soul wounds. Some trauma even goes back to the womb. And unhealed inner trauma is the reason why so many injuries remain unhealed, causing long-term painful symptoms. 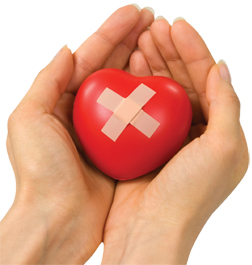 Many years ago, God called me into the healing ministry. I had started to restore a broken car which had been stolen, crashed, vandalized and set on fire! As I looked at the wreck, which seemed to be damaged beyond repair, God spoke right into my spirit and said, “You could restore this broken car, but I can restore broken lives.” Then He asked me a question: “Which is more important?” I wanted to say the broken car, but I knew that broken lives were much more important than broken cars.

As a result of that experience I was led by the Lord to establish Ellel Ministries, back in 1986, as a ministry of healing and discipleship. Since then God has taken the work around the world, and for the past 25 years, I have been teaching and ministering healing on all five continents and have seen God do many amazing things in people’s lives.

Restoring Broken Lives
Many who come for help are a bit like that broken car — they have suffered greatly and carry around with them the scars of accidents, abuse and other traumas. Their inner pain acts like a brake on their physical healing. They have learned to live with their symptoms, but without any real hope of being completely healed.

Nothing can prepare us in advance for a sudden accident or traumatic experience. Such events are always a shock to every part of our system — spirit, soul and body. But long after the physical body has recovered, traumatic pain in the inner being can still cause the body to feel the pain — often for the rest of one’s life.

But one of God’s promises (in Isaiah 61:1) says that the Sovereign Lord would heal the brokenhearted. And traumatized people, who have often been broken on the inside by what has happened to them, are literally brokenhearted. It’s often only when God has healed this inner brokenness, that people can receive the physical healing they long for.

Accidents and sudden traumas have the effect of putting all the body’s systems into a state of shock. The physical effects of shock are well-known. But what is less appreciated, however, is that in a traumatic accident a person is also spiritually vulnerable, and there is a danger of both long-term emotional damage as well as potential demonization — often through the fear that is associated with the traumatic experience.

And when accidents do happen, it’s very rare for someone not to be responsible for causing it. That person, therefore, needs to be forgiven. Unforgiveness can be one of the main obstacles to receiving healing.

45 Years an Asthmatic, Healed!
Jim was a chronic asthmatic. The condition had dominated and controlled his whole life. When we prayed for him, the Holy Spirit brought his inner pain to the surface and he began to sob like a little boy!

When we asked Jim what was happening, this ‘little boy’ told us that when he was six he had been standing on top of a stack of hay bales and couldn’t get down. His father told him to jump into his arms. So Jim jumped, but then his father stepped to one side and let Jim crash to the ground and his chest was crushed on the concrete. His father then said, “That will teach you never to trust your relatives!”

The physical injury was serious, but it was nothing compared with the trauma little Jim suffered in his heart. His dad had betrayed him. He was totally devastated and brokenhearted. The asthma developed shortly afterwards and 45 years later, his asthma was the defining condition of his life.

When Jim had forgiven his father, we asked Jesus to heal his broken heart. It was then possible for his physical body to be healed also. I will never forget hearing Jim cry out, “I can breathe! I can breathe!” Jesus had healed him on the inside, he was delivered from a spirit of infirmity and his asthma was gone forever. He had no more symptoms, no more medication and was never again restricted by his condition. When the trauma on the inside was healed, his body could be made whole.

On a Lifetime Disability Pension, Healed!
Lynda Scott was 26, and on a lifetime disability pension from the Australian government. Three years earlier she had broken her back in four places, was in constant pain, and was suffering severe side-effects of her medications. She was very depressed and suicidal!

She told us how on a night hike through the Blue Mountains she took a step off the pathway not knowing it was the edge of a cliff. She fell 35 feet through open space before landing on the rocks below. It was ten and a half hours before she was lifted out on a stretcher by helicopter. What a trauma! The doctors had done everything they could, and now her only option was to try and live with the consequences of her accident for the rest of her days.

Gently, we explained to Lynda how her body had been broken by the fall, but she had also been broken on the inside. We explained how the body (the outer man) is often a reflector of what is happening on the inside (the inner man), and that it’s sometimes impossible for the body to be fully healed until the person on the inside has also been healed. Slowly she began to understand what must have happened to her in the accident.

We prayed for her at a special conference for Christian medics. She was surrounded by dozens of medical workers ranging from anesthetists to pain consultants, from surgeons to physiotherapists. They all watched as God worked a miracle in her body before their very eyes, and healed her of the trauma which was locked on the inside.

She fell to the ground, lying in the position she had been in when she fell off the cliff. It was as if part of her inner being was still lying there — shattered, traumatized and unhealed. We took her through forgiveness of those who should have warned her of the danger and then anointed her with oil.

We watched in amazement as God poured His Holy Spirit on her and we saw her broken body being put back together by the hand of God. Lynda soon gave up her lifetime disability pension, went back to work and five years later she fulfilled what was previously an impossible dream. Lynda found God’s man for her life and now she and her husband have three wonderful children!

Our Miracle Working God
God truly is a worker of miracles. But when a person’s physical condition is related to previous traumatic events, then it’s important to pray for the broken heart and not just for the broken body! In this way we have seen countless numbers of people wonderfully healed of long-term physical conditions. God is still healing people today!