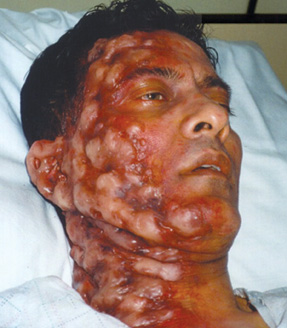 By age 34, Nasir Siddiki, a successful businessman, had made his first million, but money meant nothing to him on his deathbed. Diagnosed with the worst case of shingles ever admitted to Toronto General Hospital, his immune system shut down and doctors left him to die.

The next morning I woke in a sterile room on the eighth floor of the hospital, my skin burning as though someone had doused me in gasoline and lit a match. I felt on fire from the inside out.

My doctor arrived and looked at me in wonder. “The blisters are multiplying so fast I can literally watch them grow,” he said. ‘”Your body isn’t fighting back.”

The next morning, in addition to shingles, I had chicken pox from head to toe. I was put in strict isolation. That evening my temperature soared to 107.6 degrees — hot enough to leave my brain permanently scrambled.

For days I continued to deteriorate. My nerve endings became so inflamed that a hair drifting across my skin sent shock waves of fire rippling through my body. By week’s end, I was listed in critical condition.

My Last Hope
In life, I’d been bold, self confident, a risk taker. But facing death, I was terrified. I had no idea what might await me on the other side. I’d been raised as a Moslem in London, England, and I understood Allah was not a god who heals.

My only hope was in medicine.

I eventually slipped so close to death that the doctors didn’t know I could hear them when they examined me. “His immune system has simply shut down,” one of them said.

“He’s dying,” the other confirmed. “His immune system must be compromised by AIDS.”

I don’t have AIDS! I wanted to shout, but I couldn’t form the words. Then it hit me. He said I’m dying!

The doctors spoke quietly to my co-worker, Anita. “In a few hours he’ll be dead,” they said. “If by some miracle he lives, he’ll probably be blind in his right eye, deaf in his right ear, paralyzed on his right side and he may be severely brain damaged from the high fever.”

They left me here to die! I felt like a drowning man going down for the third time. Gathering my strength I whispered a prayer. “God, if you’re real, don’t let me die!”

In His Presence
During the darkest hour of the night, I woke and saw a man at the foot of my bed. Rays of light emanated from him, allowing me to see his outline. I couldn’t see his face, it was too bright. No one had to tell me, I knew it was Jesus.

The Koran mentions Jesus; Moslems believe He existed, not as the son of God, but as a good man and a prophet. I knew this wasn’t Mohammed. I knew it wasn’t Allah. Jesus was in my room. There was no fear, only peace.

“Why would You come to a Moslem when everyone else has left me to die?” I wondered.

The next morning, the same two doctors arrived to examine me. “The blisters have stopped growing!”

“We don’t know what happened, but the shingles virus has gone into remission!”

The following day, still in pain and covered with blisters, I was discharged from the hospital with a suitcase full of drugs. “Don’t leave home,” the doctor cautioned. “It will be months before the blisters go away, and when they do you’ll be left with white patches of skin and scars. The pain could last for years.”

Stepping outside into the morning sun, I looked like a cross between a leper and the Elephant Man. When people saw me, they crossed to the other side of the street. However, my mind was not on my looks; my thoughts were on Jesus. There was no doubt in my mind that Jesus’ presence in my room had stopped the shingles virus. Whatever else Jesus may be, I realized that in His presence miracles happened.

That fact left me with one consuming question: Is Jesus the Son of God as the Christians claim, or is He just a prophet as I was taught?

At home that evening, in spite of the drugs, the pain and itching was so severe I almost had to tie my hands. Even so, I fell into a restless sleep wondering about Jesus.

Learning to Live
The next morning, I woke early and turned on the television. Flipping through the channels, I froze when I saw the following words across the screen: Is Jesus the Son of God?

I listened intently as two men spent the entire program discussing this topic — answering all of my questions. Before the show went off the air, one of the men led the television audience in a prayer. My body was aflame with pain but I knelt on my living room floor anyway. Tears streaming down my face, I repeated the prayer and invited Jesus into my heart.

Immediately a voracious spiritual hunger sprang up within me. I had to know more about Jesus. In spite of my doctor’s orders to stay inside, the next day I went out and bought a Bible. First I read the books of Matthew, Mark, Luke and John. Still ravenous, I started in Genesis and read through the Bible during my sleepless nights.

Meanwhile, Anita brought me books and teaching tapes explaining the Gospel. I devoured them while continuing to study the Word of God. As my understanding of faith began to grow, I dug out a picture of how I looked before shingles. I prayed and asked God to make me look that way again.

Jesus, My Healer
One week after my discharge from the hospital, I woke and found my pillow covered in blisters. I must have clawed them in my sleep, I thought. I crawled out of bed and stepped into the shower. What had started on my pillow was finished in the shower: Every blister fell off my body!

Instead of being covered with patches of white and scar tissue, my skin was simply red and raw. It slowly healed, returning to its pre-shingles condition. When it did, I not only looked human, I looked like I did before I got sick, except for the scars that I still carry on my chest.

None of the doctor’s dire predictions came true. My eyesight was 20/20. My hearing was normal. My speech was unimpaired. I suffered no brain damage.

My healing was miraculous, swift and complete. I never suffered from lingering pain or any other complication. Not only did I have the worst case of shingles ever admitted to Toronto General Hospital, I also had the most miraculous recovery.

Jesus, the God of the Christians, showed up in the hospital room of a dying Moslem and healed me. But that wasn’t the greatest miracle He performed. The transformation that occurred in my heart was even more dramatic than the one that occurred in my body.

An international teacher and evangelist, Dr. Nasir Siddiki is the founder of Wisdom Ministries (WisdomMinistries.org).He lives in Tulsa, OK with his wife Anita and their two sons.