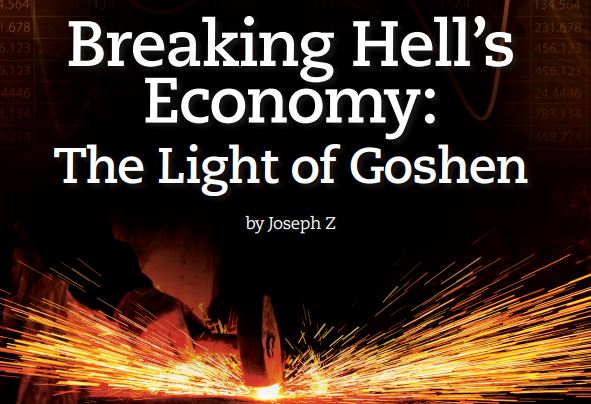 We are experiencing a last-days’ collision of kingdoms on a global scale. The hostile force behind worldwide oppression and darkness is the gates of Hell mentioned in Matthew 16:18—a system designed to come against the Kingdom of God and bring all humanity under its dominion. The gates of Hell possesses a highly effective weapon, an economy built on a humanistic self-provision that denies God as its source. As a result, the vast majority of society has surrendered to Hell’s economy, and this has been a major entry point for darkness to flood our culture.

In a time when we are faced with the looming threat of economic catastrophe, a new World War, nuclear concerns, unpredictable natural disasters, identity confusion, political chaos and censorship for anyone not agreeing with the main news outlets… it could seem a little depressing! Even a blind prophet could see that without an unprecedented move of God, our culture will cascade into what the Bible calls the end times. Although today’s issues might be new to this generation, it is encouraging to realize that they are not new compared to the Bible.

Supernatural darkness also once covered the land of Egypt. In Exodus 10:21 (NKJV) it says, Then the LORD said to Moses, “Stretch out your hand toward heaven, that there may be darkness over the land of Egypt, darkness which may even be felt.” Among the ten plagues, this one was unique because it was no ordinary darkness! It was a darkness that could be felt. Similarly, our modern society is on a path leading to the deepest darkness ever experienced since Exodus 10. The darkness we are facing in the coming days will be so great that it may once again be felt.

Voices from generations before us have predicted that unprecedented challenges would rise in the form of global difficulties. Isaiah 60 speaks of a time when deep darkness would cover the Earth, and Matthew 24 gives us a preview of what is to come using the term birth pangs. When it manifests, this new darkness will cover the entire Earth. But this experience does not have to be the case for you—if you have ears to hear it.

Why? Because while Egypt suffered, IN GOSHEN, IT WAS VERY DIFFERENT—they had red painted on their doorposts. That blood was a contract of protection with the great God of the universe and a legal notice to darkness, saying you can try walking in, but you will limp out!

The Light of Goshen

Although our world is willingly and rapidly plunging into modern darkness, there is great hope and there are answers. The real church of the Lord Jesus our Messiah will rise to meet this oncoming darkness!

Egypt is a representation of the world and its system. When darkness struck the land and its ungodly culture, Egypt became completely crippled and in a state of utter dread.

In Goshen, the people of God did not experience the same things the Egyptians did. Although they likely could see the darkness, it is also possible they could sense the heaviness and terror of the Egyptians, but they had God on their side. There was no darkness within the houses of Goshen. At the very end of Exodus 10:23, we see something thrilling! But all the children of Israel had light in their dwellings. This was no ordinary light! This Light that the people of God possessed was supernatural! It shined in the darkness, in each of the dwellings of the righteous!

This is reminiscent of Revelation 21:23 (NKJV), The city had no need of the sun or of the moon to shine in it, for the Glory of God illuminated it. The Lamb is its light. It is this Light of God that is present within God’s people, which dispels all demonic darkness. There is a way to contend against the hold of a dark system—or to break Hell’s economy, which automatically ushers you into Heaven’s economy!

One example is through a revelation of what we, the Body of Messiah, are capable of. The apostle John wrote about the power that overcomes this system of Hell—our faith! First John 5:4 (MSG) says, Every God-born person conquers the world’s ways. The conquering power that brings the world to its knees is our faith. The Greek word for “world” is kosmos, which means “system.” Another way of saying it is, “Our faith is the power that brings the world’s system (or the gates of Hell) to its knees!” Believers in this revelation are already rising above Hell’s economy.

Early church believers broke out of the system of Hell by prophetic intervention! We have an example in history from the siege of Jerusalem in A.D. 70. The city of Jerusalem was taken, and the Temple was razed to the ground.There was, however, a group of individuals who avoided the entire conflict. Do you know who they were? Believers who placed faith in the prophetic words of Jesus, who said, in Mark 13:14-15 (NKJV), “So when you see the ‘abomination of desolation,’ spoken of by Daniel the prophet, standing where it ought not” (let the reader understand), “then let those who are in Judea flee to the mountains. Let him who is on the housetop not go down into the house, nor enter to take anything out of his house.” At this prophetic word, believers had foresight and knew the signs to avoid Jerusalem’s calamity.

As the spirit of the antichrist takes territory, God wants you to stand as a warrior in faith and contend to receive the prize. I like to say it this way, “On a bad day, you’re called to be the best there is!” You can experience His Glory manifesting through you in these times. You can release the light in Goshen, and you can thrive in times of darkness! You can break Hell’s economy off your life!

I want to share some things with you, by the Spirit of the Lord, regarding the next two years and beyond. In March 2020, I prophesied three waves—that we would face the Lion and the Bear, but Goliath was coming. The first two represented everything in the pandemic season, but Goliath represented global conflict, shortages, economic shaking, and even the threat of a World War. Unconventional reformers will confront this spirit of Goliath and breathe life into appointed institutions. The challenge, however, is whatever an institution cannot control, it must kill or persecute. Like David, reformers starting as outcasts will eventually become mighty broadcasts—institutions will have an opportunity to live, and Goliath will fall.

The Lord spoke to me a year ago about what the Queen of England’s death would represent: a tremendous shifting of power, land transfers, and powerful women taking positions of authority against the spirit of Jezebel. Another word of interest is to watch for the “candidate of oil” (political candidate) with answers for the financial crisis.

I saw America’s current decline in a vision represented in biblical stages of 30, 60, and 100-fold until it reached a time of darkness. Following this would be a coming back in stages of 30, 60, and 100-fold, rising again until it stood with the label “The New America.” Reformers will play a pivotal role in the New America coming out of the darkness. Finally, a powerful re-sensitizing and retrofit of the prophetic movement has begun. As a result, a supernatural clarity in hearing will manifest, and so will discernment and timing.

Dear reader, I pray for you to break completely free of Hell’s system so that you can accomplish everything God has purposed for you!

Joseph Z is an international prophetic voice who builds lives by the Word of God in the church, government, and marketplace. He is the founder of Z Ministries.

The new video wall in our TV studio is better than we imagined! We are the first in the United States to purchase this new technology. It allows us to have a different set for my television show as well as the dozens of television productions we air and produce on our two networks—without having to store physical sets!

When our new video wall was first installed, our staff displayed a panoramic view of the city of Jerusalem. It was so beautiful and looked so real, I didn’t want to leave the studio. I was mesmerized! I felt like I was there!

When we were looking at purchasing this video wall, the company representative showed us a video of our old set on a sample section of the wall. It looked better than the physical set! It had an amazing three-dimensional appearance and much better colors.

We now have one of the most cutting-edge TV production facilities in the world! No one else in the nation has a broadcast studio using this technology—Christian or secular. The video wall is over 11 feet tall and 92 feet wide (expandable to over 102 feet wide). It provides us with a wide range of production possibilities that will allow us to be cutting-edge even into the Millennium!

It reminds me of what Kathryn Kuhlman told me over 50 years ago. She had the greatest miracle healing ministry I have ever seen and was a pioneer in Christian television. At a time even before I was in radio, let alone television, Kathryn said, “I believe Christian television should be at a better quality than secular!” She rented the finest filming facility in the world at the time —MGM Studios in Hollywood, California. Now my studio is better than Hollywood! God, Who lives in a no-time zone, must be chuckling as He brought this 50-year-old recollection to my mind. God is so good. To Him be ALL the Glory!

We recently found out about 150 Jewish families in Odessa, Ukraine that had no heat or gas to cook food this past winter. And Ukraine has bitterly cold winters! We were able to install wood stoves in all 150 homes this winter. And, better yet, our humanitarian work always includes a presentation of the Gospel!

We were also able to bless the “lowest people on earth” this winter—the Pygmies of the Congo. They are considered by their neighbors to be less than human and expendable. Many steal to eat. And when they are put in prison, they receive less than one meal a day. I have a cousin (who I found through DNA testing) who is a missionary there. He has a feeding program that we are privileged to support to feed the starving Pygmy orphans, prisoners and the mentally ill. I can’t tell you how good it makes me and Jesus feel to support these helpless starving people.