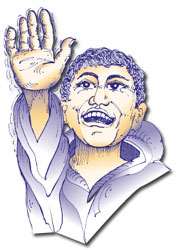 Most of us are familiar with the story of blind Bartimaeus. We’ve heard messages from preachers or read books pointing to his healing as an example of someone who cast aside his old identity (his beggar’s cloak) to receive a great life-changing miracle by faith.

But recently, as I was rereading this story in Mark 10, I saw something more. I started to ask myself, Why was this man identified by name in the gospel? Why wasn’t he just described as a blind beggar on the roadside?

Maybe Bartimaeus was a person well known to the early believers, but I think there’s something even more significant about his name. Bartimaeus comes from two Hebrew words: bar, meaning the oldest son, the heir; and tame, meaning to be foul or unclean in a religious sense, unpresentable to God.

Think of it—this guy’s name is literally “heir of uncleanness.” Every time someone speaks his name it’s like calling him “Foul Sinner.” Sin is his very inheritance! And what does this man do in the story? He cries out to Yeshua, saying, “Son of David!” Son of David was, of course, a messianic title. He was calling Yeshua the “Messiah.”

But even more literally the Hebrew phrase “Son of David” or “ben David”means “son (descendant) of loving.” It’s like saying that this man, the Messiah, has a heritage of compassion. In fact Bartimaeus cries out, “Yeshua, ben David! Have mercy [compassion] on me!”

When Bartimaeus gets Yeshua’s attention, he addresses Him as “Rabboni!” Rabboni is a Hebrew word of special honor, that literally translated means “my rabbi.” To say this to a rabbi is like saying, “I am or want to be your talmid, your disciple.” It says, “My heart is with you, master!”

The Son of Loving responds by telling Bartimaeus that his faith has made him whole. Having regained his sight, Bartimaeus follows Yeshua on the road, becoming one of His talmidim.

Bartimaeus was a real man, but at the same time his story is like a parable revealing a greater truth about Yeshua’s ministry. Bartimaeus represents all of us, steeped in our sin, sitting in inner darkness beside the road of life. Then one day we cry out to Messiah, the Son of Love, to give us the light of life. We bow our hearts to the Master, and He gives us sight.

And we follow Him, now walking with Him on the road to our destiny.