What Does the UN Have Against Israel

What Does the UN Have Against Israel?

The United Nations began its life as a group of mostly
democratic nations (about 65%). Its goal was to create a forum to discuss and
solve conflicts and bring help to peoples around the world in need. It has
turned into an automatic majority of dictatorial regimes under the leadership
of Islamic states that are anti-democratic and most of all anti-Israel.

The human race is fallen and all institutions degenerate
when God’s wisdom and order is replaced by man in center stage. The United
Nation is a microcosm of the nations of the world. In fact, it is the world.

So what should we expect? Justice? Morality? Loving our
brother as ourselves? Following Biblical values? But to the point: Why is the
epicenter of the UN’s rage and indignation focused on Israel? The answer can
only be explained in spiritual terms. The fact is that God foretold centuries
ago of His special purpose for the people of Israel. Naturally, Satan, the god
of this world, loathes God, loathes His plans and the object of His plans. It
follows that the world Satan rules likewise despises Israel – and, by the way,
that hatred extends to any person or nation being used to bring life and
justice to the world.

Think of it! Out of 193 members of the UN, there have been
times when only three nations cast a vote in favor of Israel – Israel, the U.S.
and the island of Micronesia! Today, the outcome of any UN General Assembly
vote is certain. With a couple of wildly unusual exceptions (as when the UN
voted to birth Israel in 1947) the UN General Assembly resolutions against
Israel are ratified by an overwhelming supermajority.

It is enlightening and important for us as believers to
understand how this United Nations mechanism works. Because it is
difficult to find a brief but understandable explanation of this world body,
here is a summary that can be saved for reference. First of all, in the General
Assembly, every nation has one vote – whether China with 1.3 billion citizens
or the island of Nauru with 10,000 inhabitants.

This structure was selected with the goal of giving equality
to all the peoples of the world. However, in so doing, theoretically, a
two-thirds supermajority of nations with only 8% of the world’s population
could successfully pass a resolution! That’s not going to happen. But let us
look at what does happen.

What is it that makes the UN General Assembly automatically
anti-American and anti-Israel? First of all there is a block of 21 homogeneous
Arab Muslim nations with common ethnicity, religion and culture. Though they
often fight among themselves, they rarely have a problem in uniting against
Israel. They tightly coordinate their activities through their organization
called the Arab League.

Secondly, there is the OIS, Organization of Islamic States
which includes the Arab League members and another 35 Islamic nations – making
a solid block of 56 Islamic countries.

Next there is a third block of 68 nations under the NAM
label – Non-Aligned Movement – which together with the Islamic states that are
also a part of NAM, creates a whopping 124 voting bloc.

NAM is made up of mostly developing nations with a tiny
minority having some trappings of democracy. These 20-plus partially democratic
countries (characterized as “flawed” in Wikipedia) in the Muslim or NAM orbit
are completely under Arab leadership. And the majority of NAM nations is run by
brutal anti-American and anti-Israel dictators – e.g., Cuba, Iran, North Korea,
Zimbabwe, Saudi Arabia.

In the General Assembly, 97 votes comprise a simple majority
needed to pass a resolution. Nothing more needs to be said. Add in China and
Russia and a couple of its satellites together with anti-U.S. mega economy
Brazil (a democratic socialist country), and you have a supermajority of more
than 129 without having to lobby a single democratic member from western style
democracies.

It is true there are approximately 63 strong democracies
which include the European Union, America and Canada, some island nations and a
few other democratic friends. But by themselves, they can do virtually nothing
in the General Assembly. In fact, nations in the European Union, cognizant of
the critical importance of oil for their countries, often vote with the Arab
core. So bottom line, the Arab block controls the UN.

Most GA votes need only a simple majority.

At times for very important resolutions a supermajority is
required – but only of those present. And by the time the abstentions are
counted, (members of the EU love to abstain on votes concerning Israel), the
Muslim nations have nothing to worry about as they push through their
anti-Israel agendas.

And their number one agenda is to make Israel disappear. 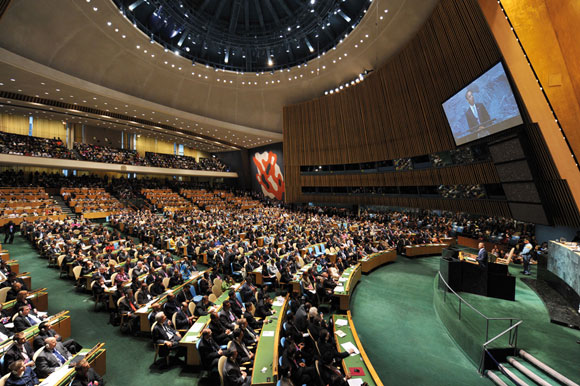 ISRAEL TREATED UNLIKE
ANY OTHER STATE

A 2005 report by the United States Institute of Peace on UN
reform said that, contrary to the UN Charter’s principle of equality of rights
for all nations, Israel is denied rights enjoyed by all other member-states,
and that a level of systematic hostility against it is routinely expressed,
organized, and funded within the United Nations system. (usip.org/un)

Anne Bayefsky, a Senior Fellow with the Hudson Institute,
said: “There has never been a single resolution about the decades-long
repression of the civil and political rights of 1.3 billion people in China, or
the more than a million female migrant workers in Saudi Arabia being kept as
virtual slaves, or the virulent racism which has brought 600,000 people to the brink
of starvation in Zimbabwe. Every year, UN bodies are required to produce at
least 25 reports on alleged human rights violations by Israel, but not one on
an Iranian criminal justice system which mandates punishments like crucifixion,
stoning, and cross-amputation. This is not legitimate critique of states with
equal or worse human rights records. It is demonization of the Jewish state.” (wikipedia/org/wiki/Israel)

Every year the UN celebrates its Annual International Day of
Solidarity with the Palestinian People.

On November 29, 2005 the event was attended by Kofi Annan
and other high-ranking diplomats. It was noticed that they were sitting next to
a map printed by the PLO. What was significant was that Israel had disappeared
from the map.

“Of specific and most immediate concern is the signal
potentially sent when three top UN officials, yourself and the Presidents of
the Security Council and the General Assembly, participated in an event with a
‘map of Palestine’ prominently displayed which erases the state of Israel. It
can be construed to suggest that the United Nations tacitly supports the
abolition of the state of Israel.” (Ibid.)

In fact, from 1982-89, the Arab states worked relentlessly
to expel Israel from the UN altogether. Only a determined U.S. lobbying
campaign prevented them from succeeding.

But the delegitimizing and marginalizing incessantly
continues. When the Arab nations launched a surprise attack against Israel in
1973, but in the end lost that war, they turned more determinedly than ever to
the UN.

In 1975, the Muslims were able to pass a resolution that
“Zionism is racism,” meaning a Jewish state is by definition racist. The audacity
is mindboggling. Twenty-one Arab Islamic states, dictatorships with virtually
no religious freedom, engineered this resolution. It passed with 72 yes votes,
35 no, with 32 abstentions.

Later, in 1991, when the western nations were trying to put
together one of their many peace conferences, Israel stood her ground and
declared she would not attend unless the UN racism resolution was revoked. The
miracle happened and the resolution was rescinded.

Except for the resolution to endorse the creation of the
state of Israel in 1947, this is the only other positive General Assembly
resolution ever passed in Israel’s favor that I have been able to find in UN
archives.

However, the legacy of 1975 remains fully intact: UN
committees, annual UN resolutions, an entire UN bureaucratic division,
permanent UN exhibits in New York and Geneva headquarters – are all dedicated
to a relentless and virulent propaganda war against the Jewish state.

Together, they have made the UN into Ground Zero for today’s
new anti-Semitism, which is the irrational scapegoating of Israel with the true
intended target being Jews.

Not only do these anti-Israel measures incite hatred against
Israelis and Jews everywhere, but they have done nothing to help the
Palestinian situation. On the contrary: they give strength and succor to
extremists. (www.unwatch.org)

I have not been able to locate anywhere a total list of
anti-Israel resolutions in the UN from its beginnings in 1947. However, here
are partial stats which paint a very clear picture.

Not a single time were these words used against any Arab
nation – no matter how many terror attacks or human rights violations were
committed on its territory! But this is only the beginning. Hostile UN
resolutions against Israel are promulgated by an unlimited budget through the
media, articles, papers, conferences, experts and committees, throughout the
world every single day of the year.

Each UN resolution is not just a bureaucratic process that
ends up in a drawer, but part of an enormous propaganda machine – created to
convince naïve citizens around the world that the UN is a moral organization
based on truth and justice and exercising careful judgment, states Danny
Ayalon, Israel’s Deputy Minister of Foreign Affairs. (dannyayalon.com)

And since the UN member states oversee a variety of
worldwide institutions, each one of them is also used with hammer-force to
crush Israel.

All of the main institutions of the United Nations have as
their bull’s eye, Israel.

The Arabs’ intention is to push through many more
resolutions against Israel and then aggressively call on the world to boycott
and sanction Israel for not obeying the UN resolutions, leading to her economic
and psychological collapse. (Jerusalem
Post, 9Sept2011)

Thank you for your fervent prayers,
Ari and Shira Sorko-Ram

Ari and Shira Sorko-Ram are the founders of Maoz Israel Ministries. The mission of MAOZ is: 1) To declare the Message of Messiah and make disciples in the city of Tel Aviv and throughout Israel. 2) To raise up Israeli leaders to prepare for the coming spiritual awakening among the people of Israel. 3) To educate and inform Christians world-wide of the strategic importance of Israel and the Jewish people in God’s plan for world revival. The MAOZ web site is https://www.maozisrael.org/.