Seeing from the Top of the Wall 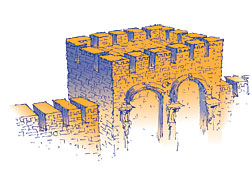 A number of years ago while walking through the old city of Jerusalem with my two daughters and two Israeli friends, we happened upon a small and seemingly very old door in the Wall of the old city. Trying the ancient iron handle on the door we found it opened to us. Intrigue nudged us forward and we decided to enter to see where it took us.

Once inside, we left behind the noisy sounds of the street and the heat as we entered the quiet coolness of an ancient stone corridor, as if we had stepped back in time to centuries before when the Wall was built. With some trepidation we began to follow the path and soon realized the Wall was constructed so people could get from one point to another within the Wall. We followed the pathway of huge stones which lay under our feet and lined the walls and ‘ceiling’ above us. We marveled at the Hebrew ingenuity in building this ancient pathway wondering how they got stones of such enormous proportions inside the Wall. This was clearly unlike anything I’d ever experienced before.

Sometimes the way was almost flat while other times the incline caused us to stop talking as we needed our breath to climb. At times, we had to bend over as we walked because the ceiling was too low to stand. Air seemed more available at some times than others. I prayed my way through each step as we continued along in the semi-darkness, not wanting to export the claustrophobia I was feeling to anyone else. That there was any light at all was somewhat perplexing to us, but it seemed to come from ahead of us which kept us moving toward it. Occasionally, the width narrowed from a comfortable six feet across where we could walk side by side to being so narrow that we had to turn sideways and inch our way through, one at a time. Breathing became a heart-beating focused activity for me at such times.

After about forty-five minutes inside the wall we came to an abrupt turn and were suddenly accosted by a burst of light, painful to our eyes, causing us to shut them for only a moment while they adjusted, but then saw that before us was an opening into which the light poured.  What I’m about to tell you all happened within a matter of seconds. We each stepped through the opening to find ourselves on a very narrow and steeply-sloping ledge which caused each of us, one by one as we came through the opening, to throw ourselves back up against the wall lest we slip and plummet down from what I realized was a very high point overlooking the Western Wall. As I gasped at the awesome view, I simultaneously became aware of three Israeli soldiers guarding the area, two of whom immediately pivoted toward us pointing their Uzi rifles at us demanding to know what we were doing there. We had come upon the shomerim, the watchmen, on the wall.* The third soldier kept his watch and his Uzi focused on the area below.

Through the turrets on the top of the wall soldiers evidently guard the city and specifically from where we now were, the area of the Temple Mount and the Western Wall, though I could see for miles beyond. I wondered, how many watchmen over millennia had guarded Jerusalem from this very vantage point?

While our friends explained how we’d found the door and followed the path, knowing I was seeing something few have been privileged to see, and aware that this was a once in a lifetime experience, I took in as much as I could, trying to memorize the sight so I’d never forget it. We were ordered to turn back and to return from whence we came and to get out of the Wall as quickly as possible. Thankful not to have been shot and to have been let go so easily, we turned back inside the Wall and much more easily and quickly, gravity being with us, made our way back to the heat and the street and the sounds of ‘today.’

I have often thought of this experience with regard to being a shomer, a watchman. These soldiers were hidden, unrecognized and unacknowledged by those whom they were guarding as they faithfully kept alert and watchful for what might be threatening or harmful. Their self-identity was clearly that of doing their part as loyal members of an army that is effective in accomplishing the tasks of defending the Land. In the same way, we as intercessors are shomerim, more often than not, hidden, unrecognized and generally unacknowledged (except by God) as we too guard the Land, be it a person, ministry or nation. As we each take our place on the Wall, wherever God has placed us, each seeing from our own vantage point as God gives us insight and discernment, we do so with a great sense of being loyal to our King and defenders of His Kingdom.

We may have walked through a door no one around us seems to have noticed. We may have had to walk a sometimes threatening and narrow pathway, wondering just where the path we are on will lead us, even feeling breathless at times. We may have found ourselves faced with more darkness than we found comfortable, but we continue to pray for the sake of others as we head for the Light, with the Rock beneath our feet. We continue upward and onward for the promise of seeing from the top of the Wall, doing the work of the Lord who is The Intercessor, and in doing so, we experience what those who don’t make the journey never do. Because in being a shomer the awe and the joy are ours knowing we can get to see the Land from God’s perspective, and we get to see and know what cannot be known except from the place of the shomerim.

Thank you for taking your place on the wall for Sid and Messianic Vision Ministries.