MIracles of the Yom Kippur War 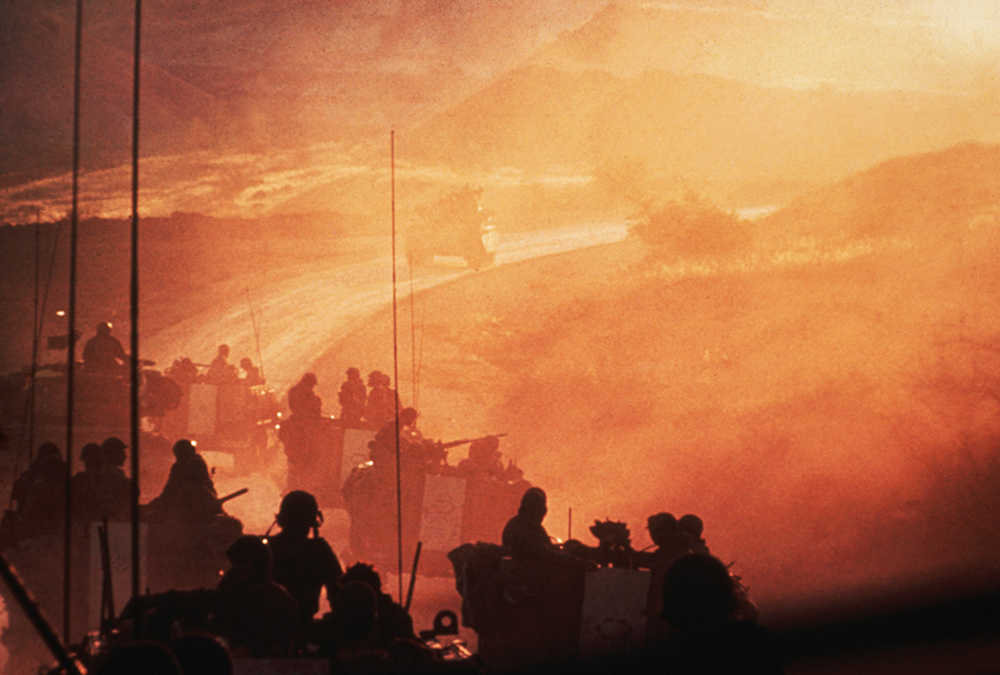 Twenty-one-year-old Lieutenant Zvika Greengold was home on leave at his kibbutz in western Galilee.  He was spending a quiet day observing Yom Kippur, the holiest day of the year.  It was October 6, 1973. In fact, most soldiers were home on leave.

Suddenly he heard the unexpected sound of Israeli fighter jets streaking through the sky over his kibbutz.  He knew it wasn’t an exercise – not on Yom Kippur.

In a two-pronged surprise attack, the Egyptians had crossed the Suez Canal and were heading for southern Israel while Syrian tanks came rolling across the Golan Heights under Israeli control, on their way to conquer Galilee.

At that time, Zvika wasn’t yet assigned to a unit, so he hitchhiked 78 miles to his Nafah base in the Golan Heights.  To his dismay, he was told there wasn’t much he could do except tend the wounded because there was virtually no operational military equipment; the base was already populated almost entirely by wounded soldiers.  While helping with the wounded, he noticed two severely damaged IDF Centurion tanks sitting off in the corner of the base.

He radioed Brigade HQ and told them he had a “tank force” (technically true) and was requesting permission to go into battle against the invading Syrians.  He helped repair the two tanks, assembled a skeleton crew, and off they drove into the night.  He soon ran into a Syrian tank 20 meters away, opened fire and the tank burned.

HIS TANK BROKE DOWN Just from the force of his attack, his own Centurion broke down.  He sent it back to the base with one of his soldiers and took control of his second tank.  Alone, he moved forward, and to his shock he saw many vehicle lights shining on the horizon.

An army of Syrian tanks and trucks were heading unhindered towards his base.  The Syrians began their assault with the first 600 of 1400 Russian-supplied tanks and 1,000 artillery pieces. Greengold radioed his commander who then asked, “How many of there are you?”

But Greengold knew he couldn’t say he was alone as the Syrians were listening.He just said, “My situation isn’t good; I can’t tell you how many.” Greengold’s own commander had no idea how many men and tanks made up the “Zvika Force!”

But Zvika was alone.  His tank heavily damaged, he used the darkness for cover and actually sped backwards along the column’s flank, firing at very close range and then dodging enemy shells while fooling the Syrians into believing there were many Israeli tanks attacking them.  He notched off ten more enemy tanks before the Syrians themselves began to back off.

For the next 20 hours, Lt. Greengold fought, sometimes alone, sometimes with other tanks, in skirmishes all across the front line.  Finding himself alone again, he gave continuous orders to his driver to climb wildly up and down the mountainsides constantly opening fire, and then “zigzagging” to appear as if he had a platoon or more of tanks.

Israel’s greatest challenge besides being immensely outnumbered was the Syrian’s sophisticated night-vision equipment, outfitted by the Soviets.  Israel had none.  At one juncture he joined another 10 Israeli tanks. But nearly all of them were quickly blown up, and Greengold’s own tank and uniform caught fire. He jumped headfirst out of his tank, followed by his gunner.  His driver was killed.

He grabbed another abandoned tank and joined a unit of 13 tanks that managed to hold back the Syrian armored column of 100 tanks and 40 armored personnel carriers. Ironically, small tank units using close-up stopgap blocking actions was a tactic that may have prevented the Syrians from overrunning the entire Golan. (https://bit.ly/zvikagreengold) 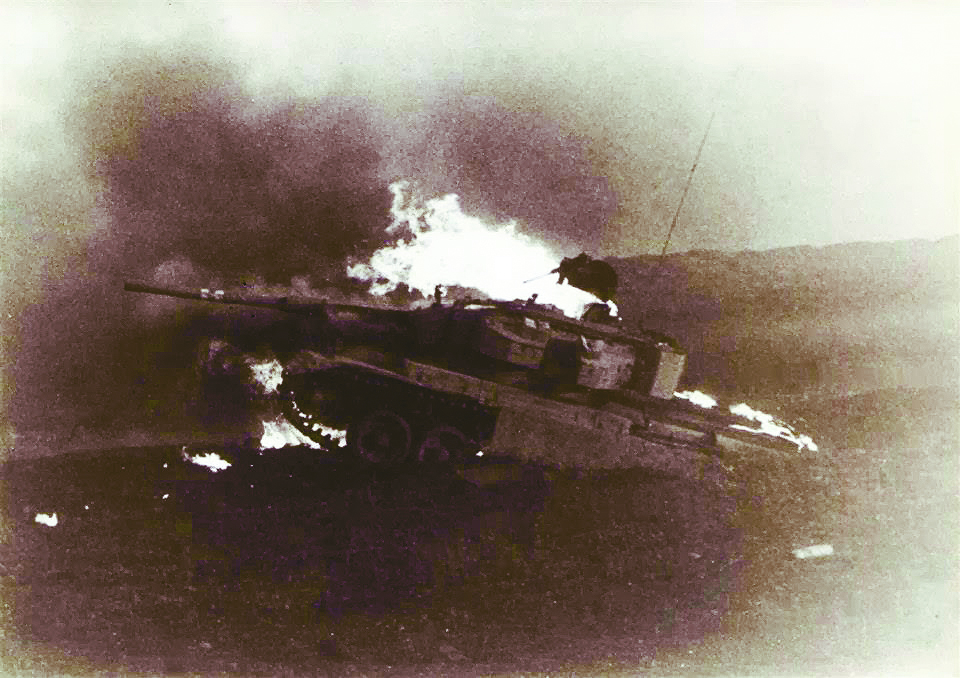 An Israeli tank destroyed. Israel lost about 1,000 tanks on the Golan Heights and the Sinai Desert in the 1973 war.

“WE HAD NO PLACE TO RUN TO”

In later years, he said that moment with the other 13 tanks became part of a wider sense of a realization that his Jewish people’s backs were up against the wall. (https://bit.ly/yomkippurwargolanheights)  “We had no other option.  We had nowhere to run to,” he said. He kept fighting, waiting for reinforcements, knowing he was dangerously low on ammunition and fuel.

When his strategic Nafah base came under attack, he moved his tank to critical spots at decisive moments, even in the face of overwhelming odds.  His tank again caught fire, and he was forced to change to another.  During the defense of the base, one Israeli tank commander radioed his HQ that “There’s no one in the camp except a single tank fighting like mad along the fences.”

He was able to stall the invasion long enough until finally reserve IDF tank units reached Zvika’s position to reinforce him.  Sometimes, he felt, “Let them hit me already!” (https://bit.ly/arabisraeliconflictsyria)  Greengold later told the press, “I wasn’t scared of dying.  I was scared of failing” – meaning of course that Israel would be crushed by the Syrian army. But he kept striking Syrian tanks and doing his best to stop them from overtaking his base.  He changed tanks half a dozen times.

As reinforcements began to arrive, radio instructions went out for all IDF units to storm the Syrian forces near Nafah and save the base from invasion.  Soon the Syrians came under fire from several directions.  They interpreted this as an ambush and began to retreat.  This is where the Golan Heights was decided, Zvika emphasized.

During a lull, Greengold painfully lowered himself from his tank, covered with burns, wounds and soot.  He collapsed with exhaustion and was rushed to a hospital after thirty straight hours of facing countless hair-raising battles.

But Nafah Base never fell into enemy hands.  Greengold’s effort may have been enough to tip the scale for northern Israel.

Zvika Greengold was awarded the Israeli Medal of Valor, the highest honor offered by the State of Israel.  He was personally credited with destroying over sixty tanks.  He is still alive today and is an inspiration to every soldier on Israel’s front line.

Israeli historians verify Lieutenant Zvika Greengold’s actions on the Golan Heights in the opening days of the Yom Kippur War were critical to the success of the campaign.  His small force consisting of anywhere between one and sixteen tanks managed to halt the Syrian advance on the Tapline Road and stall the invasion long enough for substantial IDF reinforcements to reach the front and join the battle.

His guerilla-style tactics and high kill-rate had the Syrian commanders convinced that they were fighting a much larger tank corps, allowing Zvika Force to hold off five full Syrian Armored Divisions often with only one or two Centurion tanks. 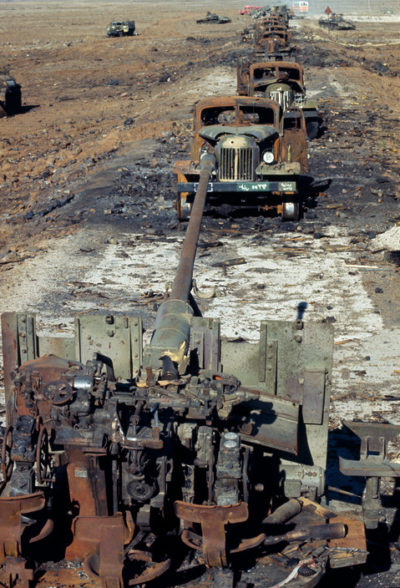 A line of Syrian Personnel carriers, destroyed, as far as the eye can see. By October 24, the IDF had regained Western Golan, and were shelling the outskirts of Damascus. The UN demanded and got an immediate cease-fire agreement. Photo: Magnumphotos / Bruno Barbey

ISRAEL SAVED AT A GREAT PRICE

Yet his entire Brigade of some 170 tanks and 70 artillery pieces sacrificed themselves some hours later by continuing to hold the line against impossible odds.  Brigade 188 was obliterated and it’s commanding officer killed.

Zvika said, “There are men alive and dead, who did wonderful things we don’t even know about.  The men on the line did exceptional things and I pale by comparison.”

It is incredible to see time and again what one man who is completely committed to his mission can do.  He just might be a descendent of King David’s “Mighty Men!”

But truthfully, there were many miracles in the war that brought Israel victory. In a place called the Valley of Tears on the Golan Heights, less than 100 Centurion tanks were up against 500 Syrian tanks. By the fourth day, Israel had three tanks left standing against 150 enemy tanks.

Suddenly the Syrian forces inexplicably turned around and headed back to Syria.  The “why” was a mystery until the Mossad interrogated the commander of Syria’s  9th Army Division.

When asked why he didn’t take out those last three tanks, he told the Mossad interrogator, “I would like to see you try and cross the Syrian missile lines while you see a whole host of white angels standing right on the missile lines and a white hand from heaven telling you to stop right there and move no further.  Needless to say, I stopped right there and then,” said the commander.” (https://bit.ly/yomkippurwarmiracle)

Maybe the Muslim commander made up the story.  But then, again, maybe he didn’t.

In this horrific war, 2,656 Israeli soldiers died.  Another 9,000 were wounded. Over 100 Israeli aircraft were shot down.  Along with Zvika, seven other soldiers were awarded the Medal of Valor.  God had returned the Golan Heights to his people as He had promised.

But oh, at what a price.

Yet, the members of the United Nations – that great peace-creating institution – continually insist that Israel give the Golan Heights back to the Syrians!   That is, everyone but President Donald Trump!  And God.