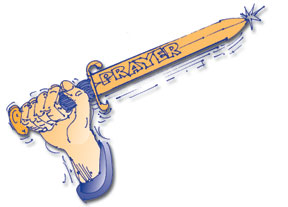 Many of the prophecies for 2007 seem to indicate coming changes this year — changes in the nation and in the church. Whatever the changes, as intercessors we want to begin to pray that God would prepare His people for what is to come. As I write this article it is the middle of January. Since you will read this at least six weeks later, perhaps you will have a better idea what those changes might be than I do as I write.

As believers, being people of prayer makes a world of difference in how we welcome or fear change. If we know the changes are from God, we can be at peace and rejoice that His will is being done. We can rest in Him as we adjust to the change. But if we discern the changes are coming from ‘the other team’ and the source is evil, our response is likely to vary between fear, righteous indignation, anger, a sense of protectiveness for victims, or sadness at any loss that might have occurred. But whatever our initial response, if we’re the Lord’s, we will begin to pray. It’s in our spiritual DNA.

I am often amazed that God allows us to partner with Him in the affairs of mankind and even more amazed that it’s through such a thing as prayer and intercession that He steers the ship of human destiny. Sometimes we whisper easily what we want to happen. And other times we are in great anguish and must wrestle till we feel we’ve connected with what God intends and we sense a breakthrough in the spirit realm. Prayer can be a delight and it can be hard work. But the power of prayer in the authority of Yeshua’s Name is undeniable.

I once had a vision in which I saw Yeshua on the throne of judgment. He was about to send someone I was praying for to hell. I heard Him say this man’s name and the words, “Enter in.” At first I thought the man had made it into heaven, but then I saw Yeshua raise His left arm and wave toward what could only have been a pit of outer darkness as it was entirely devoid of light.

I then understood that Yeshua is the Light and this man had chosen to turn away from Yeshua in his life. I spontaneously cried out to the Lord for his soul and He said to me, “You are my mouthpiece on earth, you speak the words of salvation.” I knew He meant not just me but the church. So I said the words that this man would “go forth into the kingdom of heaven.” When I said the words out loud I saw Yeshua’s mouth move as if He were saying them Himself.

I remembered when Yeshua asked Paul, “Why are you persecuting Me?” when it was the believers he was persecuting. Yeshua considers us to be one with Him in whatever concerns us. As His Body, when we pray according to His will, He hears us and we know we have what we have asked for. As it is His will that all men be saved, we can be sure that praying for someone’s salvation is in line with His will. He tells us to “Pray for the Peace of Jerusalem” so we know that praying for Israel’s well being is His will. We are exhorted to Pray for our kings (government officials) and for all men everywhere so there is much we can pray for with assurance that we are praying for His will. As Yeshua went about healing all who were oppressed by the devil, we know also that praying for healing is His will. Now don’t anyone send me emails that some sicknesses are for God’s glory. If that were true then Yeshua wouldn’t have been healing “all” who came to Him. Healing is one of the ways He manifested His Glory.

When we pray, it is not just our little prayers that are coming against any given situation. It is the power of Yeshua’s Name that carries the weight of authority and He has given us His Name by which we might join Him in preserving the world. We do not know what is ahead of us, but we do know that we can pray that the forces of the enemy are kept at bay, and that God brings forth good out of everything the enemy attempts to do.

We can pray that believers everywhere are strengthened and clear minded so as to stay confident in the Lord at all times and to be a light in the midst of any darkness. We can pray for determination to maintain morality against any onslaught of filth, and that our children not succumb to the worldly lusts and enticements but that God put an angel between them and the world to keep them from the evil one. We can pray God rescue this next generation to make them militant in prayer for Him.

Our weapons are mighty to pulling down of strongholds. Those strongholds are often media-manipulated and materialistically-fueled, but we know that the spirit world drives the physical/natural world so that we can do battle where the battle really is in the assurance that God’s Spirit is mightier than anything the enemy has to offer. We also know that God has already told us that at some point He would shake the world in such a way that that which is not of Him would fall to the ground. Will we feel it? Probably. Will it scare us? Perhaps. That’s why we can begin praying now that if and when changes come, we can interpret the changes correctly and discern what the Lord is doing in the midst of them. Surely it may look to many like chaos is prevailing, but to those of us who know the Lord, we know that God will work all things together for good for those who love Him and are called according to His purposes. We can pray now that when challenges come, we stand firm in Him and confident in His Lordship.

I once had a dream in which God showed me that in times of difficulty, those of His people who stay POISED will remain stable in unstable times. The word “poise” means to have dignity, composure, self-confidence and self-control. Dignity is inherent in the word “glory.” God has promised that when darkness — even deep darkness — comes upon the earth, the glory of the Lord will be upon His people (including Israel to whom those verses were originally spoken) so we can pray for that too. We know that our confidence is in the Lord, and that self-control is a fruit of the Spirit. Why not pray now that God’s people will remain poised before Him in good times and in challenging times, and that His glory will once again be seen in His people as it was on those first believers?