Are We Really Related? by Sid Roth

Rabbis say “You can’t be Jewish and believe in Jesus.” Many Christians feel the same.

Are We Really Related?

Jesus came to break down the middle wall of separation between Jew and Gentile (Ephesians 2:14). But today the two are still separated.When a (Gentile) Christian looks at a Jew, he thinks, “I don’t see anything Christian about you.” And when a Jew looks at a Christian, he thinks, “I don’t see anything Jewish about you.” The rabbis say, “You can’t be Jewish and believe in Jesus.” Many Christians feel the same way. 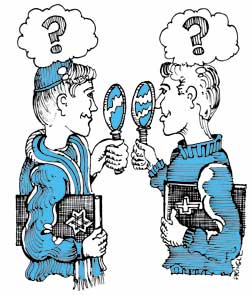 How did this happen? How did the Jewish Messiah who was prophesied by the Jewish prophets in the Jewish Scriptures and who came “only” to the Jewish people (Matthew 15:24) become so Gentile?

The first followers of Jesus were Jewish. The only Bible they had was the Jewish Scriptures. The first church followed the biblical festivals, worshipped in the traditional synagogues and was a sect within Judaism that believed Yeshua was the Jewish Messiah.

The Jew First
The early church reached out to the Jew first. I call this the “Law of Evangelism.” God began this pattern by going to the first Jew, Abraham, to reach all the families on earth (Genesis 12:3). Jesus instructed His first followers to go only “to the lost sheep of the house of Israel” (Matthew 10:5-6). Paul said in Romans 1:16, “the gospel…is…for the Jew first….” Although Paul was the apostle to the Gentiles, he always went to the Jew first.

As the early church spread into the non-Jewish world, it took on a more Gentile culture. Eventually, Gentiles outnumbered Jewish believers and then the Jewish roots of the church were removed.

Checkmate of the Devil
The restoration of the Jewish people to the Body of Messiah is the key for worldwide revival. At the Jerusalem Council meeting in Acts 15, James quoted the prophet Amos: “I will…rebuild the tabernacle of David…so that the rest of mankind may seek the Lord, even all the Gentiles who are called by My name…” (Acts 15:16-17). The word “tabernacle” can be translated “house” or “family.” What is Amos saying? When the family of David (the Jewish people) are grafted into their own Olive Tree, there will be revival among the Gentiles! And not just any revival. Amos goes on to compare it to land producing crops so quickly that “the plowman shall overtake the reaper” (Amos 9:13).

There has never been a time like this in history. The harvest of souls will be so great, church buildings will not be able to contain it. We will have to take over football and baseball stadiums to accommodate the new believers.

Now you can understand the heart of God at this moment in history. Now you can see why so many Gentile Christians are getting interested in the Jewish roots of their faith. The Spirit of God is speaking this revelation to the church worldwide. When the Jew is saved, not only will it open a supernatural door for large numbers of Gentiles to be saved, but it will be the checkmate of the devil—the return of Jesus! (Matthew 23:39).

Before the Fall
The closer we get to the return of Jesus, the more Jewish and pro-Israel the church will become. A Jewish person will look at a Christian and say, “You are more Jewish than I am.” Is that because Christians will walk around wearing yarmulkes (head coverings)? No. I am not talking about the traditions of men that evolved in Judaism by the time of Jesus’ first coming. And I certainly am not talking about the traditional Judaism of the rabbis today.

Then what will this end-time congregation look like? What will cause Jewish people to take notice? Two key ingredients will be true intimacy with God and joyous celebrations of the biblical feasts. Adam enjoyed pure fellowship with God before sin brought separation and death. The second Adam, Jesus, came to restore that which was lost. God desires the same intimacy with us that he had with Adam before the fall. Did you know He has even set appointments to meet with us?

There are seven specific appointments when God promises to meet with us. The first three were rehearsals of His first coming and the outpouring of the Holy Spirit. I believe the next three are rehearsals of His second coming. And the seventh, the Sabbath (Shabbat), is a rehearsal of the Millennial rule of Jesus on earth.

If you had attended a dress rehearsal (convocation) of His first coming before it happened, you would not have missed it. The same is true today. Celebrating the rehearsals (convocations) will help you prepare for His return.

Never let a religious spirit put you under bondage with these rehearsals. Observance is not a matter of righteousness or salvation, but blessings. Isaiah 58:13-14 says those who observe the Sabbath are promised to be so blessed, they will “ride on the high hills of the earth.”

God tells us that when we bless the Jewish people we will be blessed in return (Genesis 12:3). What greater way to do this than by inviting Jewish people to great celebrations where God promises in writing to meet with us? The reason God’s glory will be released is because we will have such intimacy with Him, we will yield completely to His Spirit. Every year our celebration of the festivals will be different. We will lay down all our agenda for God’s. And when God shows up, miracles will take place.

Prepare the Way
“The Jews require a sign” (miracle, 1 Corinthians 1:22, KJV). When we move into these God celebrations with Holy Spirit revelation and glory, we will provoke the Jew to jealousy (Romans 11:11). But even more importantly, Jews will be grafted back into the Olive Tree. Then the prayer of Jesus in John 17:21-22 will finally be answered. He prayed that the only people groups at the time—Jews and Gentiles—would be one. Jesus says this combination will cause the world to believe.

When the division between Jew and Gentile is healed, it will cause supernatural unity—the breaking down of divisions between all races and denominations. Jesus is not returning for a fractured, powerless Bride. As the Body of Messiah is restored, we will do the same works as Jesus and even greater. Death, disease, and deprivation of the kingdom of darkness will be defeated. This supernatural unity of Jew and Gentile will prepare the way for the Lord. When the pattern is right the glory comes down!