Feisty or passive? You choose.

This offer is for the digital versions only. It does not include the physical books or CDs.

Seer Ana Werner doesn’t pick spiritual fights, but she’s learned how to finish them. It took an unexpected season of schooling, but God showed Ana how to fight and win. Heaven’s kind of fight is not what you’d think, and every believer can master it.

Now Ana’s latest book, The Warrior’s Dance, teaches and imparts what she learned about how to do things God’s way, including how to— 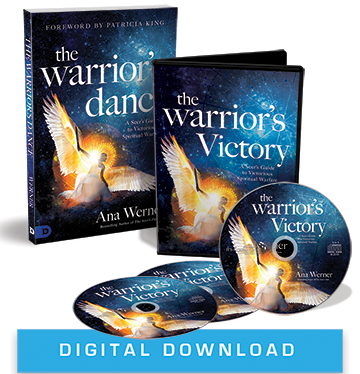 Every believer will encounter more than one unwanted battle. Ana says you will want Heaven’s perspective when trouble comes. Ana gives you a plan for victory, and it is exactly the help you need.

Ana Werner and her husband Sam reside in Missouri with their two children. She is the founder of Eaglets Network and Ana Werner Ministries. Ana travels and equips people internationally on seeing in the Spirit, healing and moving in the prophetic.