Are the shadows of Ancient Gods operating in our nation today?

Is it possible that behind what is taking place in America and the world lies a mystery that goes back to the gods of the ancient world…and that they now have returned?

The Return of the Gods is the most explosive book Jonathan Cahn has ever written.

In The Return of the Gods, Cahn takes the reader on a journey from an ancient parable, the ancient inscriptions in Sumer, Assyria, and Babylonia giving insights to what is taking place in our world to this day, specifically in America.

Is it possible that these fallen beings from ancient times are the unseen catalysts of modern culture, not to mention every culture since?

Are these the dark forces behind the most pivotal events and movements taking place in our nation and around the world—transforming our culture, our children, our lives, and America itself?

Did this mystery even determine the exact days on which Supreme Court decisions had to be handed down?

Jonathan introduces the principals by name. The Possessor, the Enchanter, the Destroyer and the Sorceress. And identifies their agendas.

Plus Exclusive Content—The Return of the Gods Uncensored, Jonathan’s 8-DVD set, delivers more exclusive and powerful content that you can’t get anywhere else. 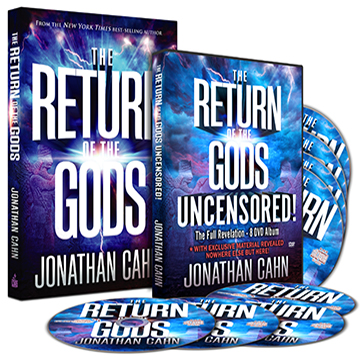 Jonathan covers revelations that simply could not be included in the book. His review of these secrets and insights are found only on Jonathan’s DVDs, including:

We are called to discern the times and act!