Step out of your past into what God has imagined about you.

The Bible is full of unlikely heroes that God simply chose to accomplish His plans. What was the catalyst for their change? They yielded to God.

In No Longer Mere Mortals, Kerrick Butler asks you to do some yielding of your own. As you do, Kerrick says you should expect to: 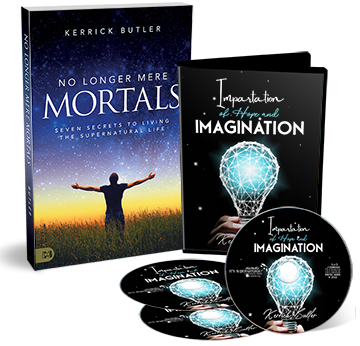 In his 3-CD audio series, Impartation of Hope and Imagination, Kerrick Butler goes on to help you release your imagination, one of your most powerful gifts from God. Kerrick wants you to simply step out of your past into the things that God has imagined about you.

Kerrick says it begins with the decision to refuse to settle. That’s something God can work with!

Kerrick A. R. Butler II serves as Senior Pastor of Faith Christian Center headquartered in Austell, Georgia, with satellite campuses throughout the metro Atlanta area. He is a graduate of Word of Faith Bible Training Center and Oral Roberts University.

Kerrick Butler says the Bible is full of unlikely heroes. You’re one of them!