Mystery of the Power Words & You Can Outlast the Devil (Book & 3-CD/Audio Series) by Kevin Zadai; Code: 9723

Mystery of the Power Words & You Can Outlast the Devil (Book & 3-CD/Audio Series) by Kevin Zadai; Code: 9723

Kevin Zadai says there are words straight from Scripture that paralyze the devil. They defeat unseen powers, release healing, accelerate increase and bring down strongholds.

Kevin calls them power words…and he says satan wants them removed from your vocabulary.

In his book, Mystery of the Power Words, Kevin brings laser sharp focus to the words you speak. You will: 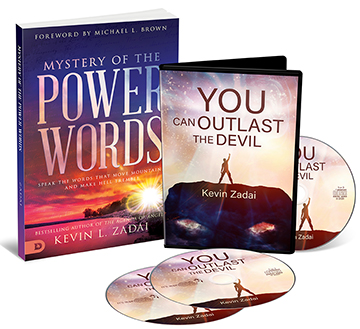 Kevin’s 3-CD/audio series, You Can Outlast the Devil, takes you directly into applying power words to your life. Kevin gives you a clear explanation of the devil’s strategy against you, then equips you to stop satan in his tracks. Kingdom—Authority—accomplished!

Kevin Zadai learned there are words the devil is so scared of he wants to erase them forever. Use them daily in 2021!