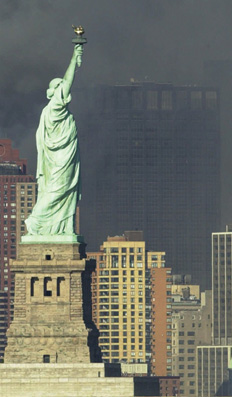 Is it possible that there exists an ancient mystery in which is hidden the secret of America’s future? Is it possible that this mystery lies behind everything from 9/11, to the War in Iraq, to the American housing bubble and its bursting, to the crash of Wall Street and the global economy, to the Great Recession and much more, even the President of the United States?

It might sound like the plot of a science fiction or Indiana Jones movie — but it’s real. One more question: Is it possible that God is now sending a prophetic word to America, a word of warning that the nation lies in danger, and unless it returns to Him is heading for impending judgment?

A number of years ago, as I was standing at the edge of Ground Zero in New York City, I came across the first puzzle piece of an ancient biblical mystery and a prophetic message known as The Harbinger that concerns the future of America. My friend Sid Roth asked if I could give you, his Mishpochah (family), some exclusive insight into the mystery of The Harbinger.

The Nine Harbingers of Judgment
Before God judges a nation, He sends warning. He sent warning to ancient Israel. He even allowed its enemies to breach its borders in a devastating strike that would traumatize the nation. It was a wake-up call, the call to return to God. But the nation responded with defiance. God then gave Nine Harbingers of Judgment, nine prophetic signs, alarms, and foreshadows of what was to come.

Now America is the nation in rapid departure from God’s will. And God has likewise allowed an enemy to breach its borders in a devastating strike — the terrorist attacks of September 11, 2001. It was, likewise, a wake-up call. But America, like Israel, has not responded with repentance but with defiance. And now the Nine Harbingers of Judgment have reappeared and have done so on American soil. Four harbingers have manifested at Ground Zero, two harbingers in Washington, D.C., and several involving the highest of American leaders — each harbinger containing a prophetic message and warning. There isn’t space here to even begin to cover all the mysteries — but I’ll touch on one of the Nine Harbingers and three of the mysteries.

The Word that Pronounced Judgment on America
As the dust settled on ancient Israel after the first attack and calamity, the nation’s leaders uttered a specific series of words. The words formed a vow of defiance (see Isaiah 9:10). It would seal their fate. It would declare that they would not repent before God, but would defy Him instead. It was the Ninth Harbinger. It would seal their fate as a nation and lead to their destruction.

On the very morning after September 11th, the Ninth Harbinger now manifested in America. It happened in Washington, D.C. On that day, from Capitol Hill, out of the mouth of the Senate Majority Leader, proceeded the exact same words uttered by the leaders of ancient Israel 2,500 years before, in the last days of that nation’s judgment (Isaiah 9:10). Having no idea what he was doing, the Majority Leader was declaring America as under the judgment of God. It was the reenactment of an ancient mystery — and bore the most grave of consequences.

The Biblical Secret that Caused America’s Economic Collapse
According to the ancient mystery revealed in the Book of Isaiah, if after that first calamity and warning, the nation doesn’t return to God but responds in defiance, it will end up triggering a second calamity. It was because of this ancient key, that, seven years after 9/11, the American economy collapsed. In the days after 9/11, the Federal Reserve slashed the base interest rate in an attempt to defy the consequences of the attacks. That action put us on the path leading to the collapse of the American economy seven years later.

In 2008, the government made a second fatal mistake, another ill-fated financial decision, that would trigger the collapse of the American economy. Amazingly, it took place on the seventh anniversary of the uttering of the ancient vow on Capitol Hill. 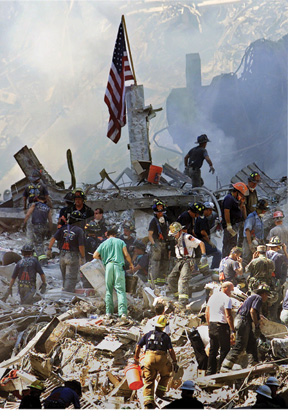 Wall Street and the Mystery of the Shemitah
As the prophets gazed out at the ruins of ancient Israel, they realized that there was a mystery to the timing of God’s judgment. That mystery centered on the biblical Shemitah. Every seventh year, the Shemitah, or Sabbath Year, would cause the land to rest, when sowing and reaping, buying and selling, would come to a standstill. The Shemitah was unique in that it specifically affected the nation’s economic and financial realms — wiping out all accounts of credit and debt. For the nation that departs from God, the Shemitah becomes a sign of judgment.

The year of Shemitah reaches its culmination on the last day of the Hebrew year. In September of 2008 came the greatest stock market point crash in American history. When did it happen? On the biblical day of the Shemitah — the very day when credit and debt, the accounts of the financial realm, are wiped away! Seven years earlier was the second largest crash in American history — it was the one caused by 9/11. When did that crash take place? On the day of the Shemitah! Thus the two greatest financial collapses in American history both happened on the exact same Hebrew day — the day of the Shemitah — the sign of a nation departed from God. And the night after each of America’s stock market crashes came the Feast of Trumpets, the sounding of the shofar — the other biblical sign of judgment.

America’s Mystery Ground
When judgment came to Israel, the calamity returned the people’s attention to the place where the nation had been consecrated to God — the Temple Mount. God was calling the nation back to Himself. What about 9/11? Could there be, in the American calamity, as well, a mystery of return? Could there be a prophetic message hidden in the place where it happened? There is a place, where America was consecrated to God in prayer. It is also a place linked to a prophetic warning given on that same day — uttered by the nation’s first President — now coming to pass. What is that place? Ground Zero.

In 1789, newly inaugurated President, George Washington, gave a prophetic warning at Federal Hall in New York City. He declared that America’s prosperity and protection were dependent upon its adherence to God. Later, the political leaders of this young nation gathered at St. Paul’s Chapel to commit the nation’s future to God’s purposes. That Chapel is located at Ground Zero and survived 9/11 virtually unscathed.

Things to Come and the Call of the Watchmen
Two years before 9/11, I stood overlooking the Hudson River in a gathering of prayer for God’s mercy on New York — a gathering based on a prophetic sense that a terrorist attack would come to the city in future days. As I led in prayer, my focus was drawn to the two towers of the World Trade Center across the water. A deep sense came over me of things yet to come for America. Two years later it would all begin.

There is much more concerning the ancient mystery and what the future holds than I could possibly share here — but I do so now as a prophetic call to you as God’s people. On the biblical calendar, September is the time of the trumpet call, the days of repentance, and the calling to return. Our nation is in danger — and God is calling. Pray for America, for God’s mercy, for repentance, and revival. Arm yourself by ordering my seven CD series that reveals these ancient mysteries hidden in the pages of biblical prophecy (see ordering information on the right). Then pray that the message of The Harbinger now goes forth.

The signs are clear — the Nine Harbingers of Judgment have appeared, the sign of Shemitah has been fulfilled, the ancient progression of judgment has advanced to the next stage, each one a foreshadow. What then does the future hold in store for America — and for us?

Jonathan Cahn is Rabbi and Pastor of the Jerusalem Center in Wayne, NJ, and leader of Hope of the World Ministries.