God often speaks in pictures to His people. What do you see?

Got Vision?
By Richard Mull

Early in my walk with the Lord, in my passion to hear God I would ask Him to speak to me, then sit in silence waiting to hear God’s voice. I would always leave frustrated. I would have all kinds of pictures scrolling through my head and all sorts of thoughts. They were good thoughts but I believed that they were distracting me from being able to hear God. I wanted everything in my head to be quiet so I could hear the “still small voice.”

Everyone knows that when you hear God He will have a low resonant voice — maybe thunder will be rolling in the background — then a voice like James Earl Jones or Morgan Freeman will boom from heaven over the thunder. Then you will know that God has spoken to you!

Right? Isn’t that what God will sound like? If you are laughing right now, that’s good. If I just described what you have never put into words, but it describes what you at some point expected God’s voice to sound like, then you are not alone. When I speak on the subject of hearing God’s voice, I often survey people and everywhere, in every type of group, people have the same preconceived ideas about God’s voice.

I had seven years of theological training, and I’d been to church my entire life, but the only way I had been taught that God speaks is through the written Word of God — the Bible.

The one facet that I want to highlight from my study, out of a million powerful keys that could be emphasized, is the question, “What do you see?” God spoke to Jeremiah and asked him that question. Later the Lord asked me, “What do you see, Jeremiah?” (Jeremiah 1:11 NET).

If someone had asked me that question many years ago, when I was trying to hear God, that phrase would have liberated me. All of the times I tried to hear God, I saw images, yet I never dreamed that they could be visions from God. They seemed so random.

Look at Jeremiah’s answer to God.
I answered, “I see a branch of an almond tree” (Jeremiah 1:11 NET).

How random is that? What in the world does a branch of an almond tree have to do with anything? Why would someone write that down or pay any attention to it? What a wimpy vision! That is what I would have thought. Actually I would have considered it just another random picture in my head.

God then gave Jeremiah the meaning of that simple picture in his head.

Then the Lord said, “You have observed correctly. This means I am watching to make sure my threats are carried out” (Jeremiah 1:12 NET).

Even the interpretation seems random to us in the English, without the following greater context: The almond tree is the first one to blossom and bear fruit in Israel. It had been nicknamed “the hasty tree.” God encourages Jeremiah that He had seen well and that He was going to hasten to perform His word.

God often speaks in pictures to His people. I was having visions for years and had no idea that they were manifestations of God speaking to me. I was most aware of them when I was asking God to speak to me, but no one ever said to me, “What do you see?” I would ask God to speak to me and then be so frustrated that I had all these pictures and thoughts about God. I was waiting for thunder and the booming voice, the way Hollywood portrays God speaking.

Recently, after hearing me preach, a woman told me that she only had two visions in her life. I then asked her if, when she was praying she saw pictures in her mind. She replied, “All the time.” I told her, “Next time, write them down and ask God for the interpretation.”

Look at these other examples:

The Lord again asked me, “What do you see?” I answered, “I see a pot of boiling water; it is tipped toward us from the north.” Then the Lord said, “This means destruction will break out from the north on all who live in the land” (Jeremiah 1:13-14 NET).

The Lord said to me, “What do you see, Jeremiah?” I answered, “I see figs. The good ones look very good. But the bad ones look very bad, so bad that they cannot be eaten.” The Lord said to me, “I, the Lord, the God of Israel, say: ‘The exiles whom I sent away from here to the land of Babylon are like those good figs. I consider them to be good” (Jeremiah 24:3-5 NET).

And the Lord said to me, “Amos, what do you see?” And I said, “A plumb line.” Then the Lord said: “Behold, I am setting a plumb line in the midst of My people Israel; I will not pass by them anymore” (Amos 7:8).

He said, “What do you see, Amos?” I replied, “A basket of summer fruit.” Then the Lord said to me, “The end has come for my people Israel! I will no longer overlook their sins” (Amos 8:2 NET).

The question is: what do YOU see? Maybe you are having visions from God and you don’t know it! I believe that all of God’s children can hear His voice. The problem I find is that most people have never been taught how to recognize His voice. “What do you see?” is just one example of a simple key that can help you to discern when God is speaking to you in visions.

Pay attention to the images and words that come to your mind. Write them down like Jeremiah, Amos and Zechariah did. Then ask God what they mean. Write down the first thing that comes to your mind. 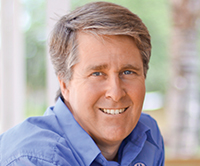 God speaks to our spirit. He is Spirit and we are spiritual beings, but we are more aware of our thoughts. That is where we tend to interpret what God is speaking to us. When you take time to listen to God, just pay attention to your thoughts. Write them down, and then ask Him to help you discern the meaning.

Richard Mull is a renowned author, speaker and ministry leader. He is the Founder and President of Operation Light Force near Tampa, Florida, whose vision is to equip men and women — old and young — to think, act and be like Jesus for their entire lives.

I interviewed Tommy Welchel last month. He is the last living link to the greatest revival to ever hit America — the Azusa Street Revival.

As a teenager Tommy was privileged to hear amazing stories directly from the elderly survivors of this revival. God had told them that Tommy was chosen to share these stories with the world.

The three major leaders of the Azusa Street Revival prophesied that 100 years from that time there would be another revival. This would be just before Jesus returned. It would be greater, be worldwide and “nobodies” would walk in the same miracles as Jesus and even greater!

It is now 100 years later and Tommy believes it is the right time to see this explosion of creative miracles.

Our ministry’s passion is to mentor you in the supernatural to present evidence of the reality of the invisible God to a world that is rapidly turning away from Him. This explosion of miracles by the average believer will turn the tide of the horrific anti-Christian avalanche we have all been witnessing.

Our second passion is to reach the lost — to the Jew first.

Several weeks ago I was a guest on a New Age radio show called Coast to Coast. They wanted me to talk about miracles. This show has the highest overnight audience of any radio program in America. The estimated audience was almost 500,000! And 98% were unsaved. Since Jewish people are very interested in the New Age, it has a large Jewish audience.

I was interviewed from 2:00 to 4:00 a.m. and then they opened it up for phone calls until 5:00 a.m. I tried to give an altar call three times, but the host did not permit it. However, I was able to give compelling reasons why Jesus was the Messiah and to share the Gospel. Then God exploded with miracles. One caller said he was healed and the host was amazed. Later on Facebook, 750 new people came to my page and the reports of miracles and interest in the Gospel were over the top.

A believer who listened wrote to me about the show:

That was a ground-breaking testimony and prayer that went out across to a demographic of listeners that has never heard of Jesus as we know Him. You penetrated the darkness and principalities over the airways that have virtually been

untouched by the Gospel, a mission field changed for eternity!— Ray C.

I offered my Jewish evangelistic book during the interview, and we had over 2,400 requests! Only eternity will tell how many people became believers from that show.

A friend and previous guest on It’s Supernatural! told me he plays our new TV network, SidRoth.org/ISN, at home 24/7. He says this makes the presence of God saturate his whole house. We have hundreds of archived TV programs in high 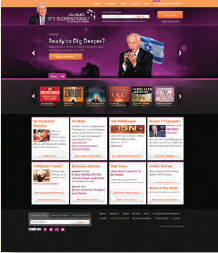 definition available free on any computer or smart phone in the world. Many are watching these archives several hours a day. People are getting healed and say the early shows are as anointed as the new shows!

And please visit our newly redesigned website SidRoth.org as pictured to the left. It is mobile-optimized for easier viewing on your iPad or smart phone. Our site has a huge collection of resources to mentor you in the supernatural for the purpose of reaching Jews and Gentiles with the Gospel.

You are being equipped to be a main player in the greatest revival to prepare the world for the soon coming of Jesus!