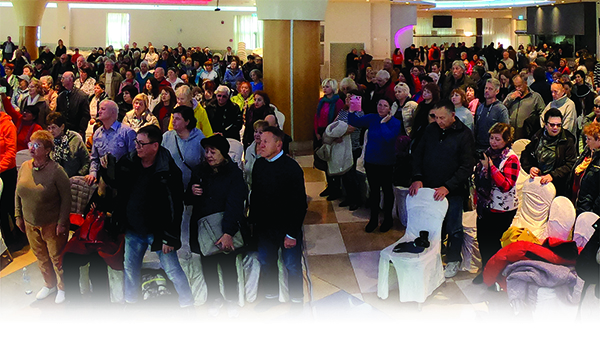 I am writing this letter on a plane as I return home from my Jewish evangelistic outreach in Israel. I found out that Israel has had historic rainfall over the last three

months. Rain represents the blessings of God in this desert region. But this 50-year-record rainfall resulted in flooding, and even death.

We expected 1,000 unsaved Jewish Israelis to attend my “Lecture on the Supernatural,” but in the early morning hours on that day the rain was torrential and many hesitated to venture out. In spite of this, God came through once again when 738 unsaved Israelis piled into the lecture hall! Note 7+3+8 equals 18. In Hebrew the word for 18 is Chai from which we get the toast L’Chaim, “to life!”

We were FLOODED with the Presence of the “Life” of God. The audience was more riveted than at any evangelistic meeting I have ever had! They hung on every word as I spoke.
I take no credit. God’s Greater Glory appeared and many miracles of healing erupted among these Israeli Jewish nonbelievers. In the Greater Glory, God does ALL the work and He gets ALL the credit. For masses of unsaved Jewish people to say they were healed is historic. That’s a real miracle!

Then the Greater miracle occurred. Whereas the floods in Israel caused a few deaths, the flood of the Holy Spirit caused MOST of the Jewish nonbelievers to LIVE! I stood in awe of God as most of the unsaved Jewish people stood up and publicly proclaimed Jesus as Lord! Just as the recent rainfall has set records on earth, the rain of God’s Greater Glory set records in Heaven.

I also noticed that every unsaved Israeli I witnessed to on the streets was extremely open to the Gospel, and most said a prayer of salvation with me. One taxi driver thanked me over and over saying he was so lucky to have met me. I told him he wasn’t lucky, but blessed!

Why was it so easy witnessing in Israel? Two main reasons. First, due to fear of persecution, most believers do not witness, so there is much low- hanging fruit, begging to be picked. Second, this is God’s season of mercy on Israel. The flooding in the natural was God’s prophetic picture of what is happening in the supernatural.

I showed my new Jewish evangelistic book to the pastor of the Messianic Jewish congregation who follows up on the new believers. He told me there are few good Jewish testimony books in Israel. We are now looking into printing my evangelistic book designed for Jewish Millennials into Russian and Hebrew for distribution in Israel.

The new year has started out so powerfully with this historic Jewish outreach in Israel that I know 2020 will be our BEST YEAR EVER. I pray because you are under the same favor of God for blessing this ministry that it will be your BEST YEAR EVER! Expect a sudden eruption of God’s Global Glory!