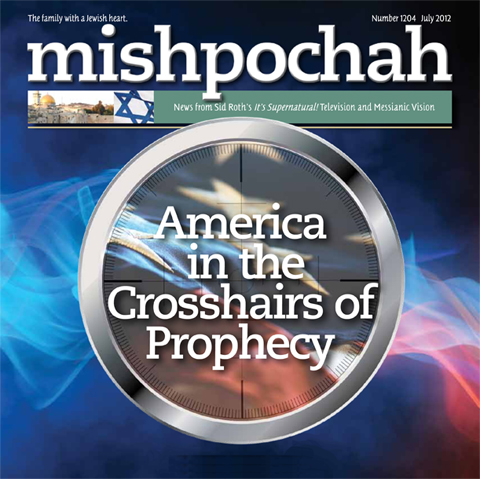 From her very roots, America has been prophetically and spiritually connected to the land of Israel and God’s chosen people.

Shane Warren had an open vision lasting several hours in which he saw the future of America.

We are quickly approaching a time of distress that the Scriptures refer to as the Tribulation
Period. There has never been a generation that has seen the significant signs of prophecy as has
this one upon whom the end of the world has come.
The prophetic winds are blowing as never before creating the perfect storm.

We can now fully comprehend
why Jesus said of these days that
people’s hearts would fail them for
fear. On the other hand, how exciting
to be alive and positioned in the
crosshairs of prophecy! As the stormy
winds violently blow, there is another
great wind sweeping across the globe,
the mighty, unstoppable wind of the
Holy Spirit! This eternal wind is sure
to change history as the greatest
harvest and explosion of signs and
wonders the world has ever seen is
ready to be released.

The book of Revelation mentions
four angels that are positioned upon
the four corners of the earth (7:1).
These angels have been given power
over the four winds of the earth.
Throughout history there have always
been four winds that have shaped
nations: the winds of war, economics,
politics and religion. Our generation
is experiencing a simultaneous
escalation of these four winds.

Some nations are at war, and
many others positioning
themselves for it. There is
a global economic meltdown as
entire countries are plunging into
bankruptcy. Nothing more needs to
be said about the current political
quagmire that frustrates humanity.
Finally, religion has become the focus
of the world since 9/11 and America’s
struggle against terrorism; Christianity
and Judaism vs. Islam; and so-called
conservatism vs. liberalism.

The most disconcerting thought
about the situation is that it now
seems to be zooming in on Israel and
more specifically Jerusalem. In this
end-time extravaganza, the future of
America is physically, financially, and
spiritually linked to its relationship
with God’s chosen people and land.
Unfortunately, it seems that the
current leaders of both major political
parties in the United States are quickly
abandoning America’s spiritual
heritage, thus forsaking God and His
beloved land Israel.

Israel has been — and will always
be — God’s prophetic timepiece and
the centerpiece of prophecy. Jerusalem
has become the stumbling block of the
world. Profound demographic, social,
and political transformations are
reshaping the U.S.-Israeli relationship.
Changes underway in both countries
have eroded traditional pillars of the
relationship, brought new elements to
the fore, and contributed to debates
about how to defend each country’s
interests in a rapidly changing
strategic environment.

Uncertainty is growing about
how the United States and Israel can
and should cooperate to secure their
respective interests, and confront
common challenges in a region
undergoing dramatic shifts. Even
more profound, both Americans
and Israelis increasingly see each
other’s policy choices as undermining
their own. This trend deepens U.S.
doubts of Israel’s strategic value, and
reinforces Israeli fears about U.S.
commitments and guarantees to help
protect their land. As a result, Israel
and America are in a very dangerous
position. Israel is in danger because
America is possibly the only ally she
has. America is in danger because
violating God’s principles concerning
the dividing of Israel’s land positions
America for divine
judgment (Joel 3:2).

I recently had an
open vision of the
future of America.
I was sitting on
my couch when
suddenly my TV
changed channels
to a current weather
forecast. I was
shocked as the news
anchor showed a picture of what
appeared to be the largest hurricane
I had ever seen. Normally hurricanes
form in the ocean as stormy winds
collide and then make their way
toward land; however, this hurricane
was completely different! It was
already on land, specifically America.

As the news report showed
a satellite image of this storm, I
noticed that it spread from America’s
northern border with Canada to the
southern border with Mexico. The eye
of the storm was plowing through the
heartland of America.

The news anchor said, “We have
a correspondent on the ground in
the storm.” The scene switched.
I watched a young man with a
microphone in a rain suit being
tossed by the wind. I could see
some sort of debris swirling around
his head. He said, “This is a most
unusual storm. It’s not raining in
the normal way.” He reached down
toward the ground and picked up
a handful of one-dollar bills. “It’s
raining money!” he shouted.

The scene switched back to the
news anchor. I sat there in shock as I
heard him say, “Ladies and gentlemen,
there has been another catastrophe. It
seems that a major earthquake has hit
the New Madrid Fault” (near the center
of the U.S.). Pictures flashed before my
eyes of devastation as cities collapsed
from the shaking. Immediately, I
heard a loud voice behind my right ear
that said sternly, “THEY DIVIDED MY
LAND. NOW I WILL DIVIDE THEIRS!”
I knew that this was the voice of God
and that He was judging America
because of her reckless policies
concerning Israel.”

As the vision unfolded, I saw
the collapse of the dollar. Riots filled
the streets of America’s cities. I saw
people holding large picket signs
that read, “I want my entitlements!” I
witnessed a private meeting of foreign
nations that met for the sole purpose
of devaluing the dollar. The price of
silver went up, a fact that I have no
explanation for to this day.

America is in the crosshairs
of prophecy. From her
very roots, America has
been prophetically and spiritually
connected to the land of Israel and
God’s chosen people, the Jews. The
laws of the land were based on the
first five books of the Bible. To depart
from this heritage is detrimental to
this nation and the nation of Israel.
In fact, America might
have very well already
crossed the line, the point
of no return. If so, then
the judgment of God is
already descending upon
this nation! This is even
more reason to pray for
mercy for more time to
preach the Gospel.

The body of Messiah
must arise from
her slumber. While
she has been asleep
in the bed of religion,
the enemy has come
in and sown tares. The
Church must take action
now! It is imperative
that Christians become
involved in the processes
to select righteous
leadership that will
honor the Word of God
and America’s national
spiritual heritage.

In 1 Corinthians 11:31,
Paul said that if we would
judge ourselves, we would
not be judged. We still
have the promise that
if the body of Messiah
will pray and turn from
wickedness to seek the
face of God, that He
will hear from heaven
and heal our land (2
Chronicles 7:14). At the
same time, the Scripture
is abundantly clear that
the nation that forgets
God will come under a
curse and be turned into
hell (Psalm 9:17).
We must pray for
mercy and pray for more
time. Pray for the peace of
Jerusalem and pray that
another Great Awakening
visits America. God’s will
is not judgment. His will
is blessing!

God has a key for you to walk in the blessing of
Abraham no matter what happens to the economy.
Last week I got the
following email from an
unsaved Jewish man
who had just received
my evangelistic book in
the mail:
“Sid, I got your
book today…. I don’t
know any other Jews
around me who got
it. I too have a spine
injury [chapter one of the book
is about an Israeli who was miraculously
healed of a spine injury]. What an incredible
‘coincidence’! I would like to talk to you.”

When I spoke to him, he promised to read
the book. He is an Orthodox Jew who speaks
Hebrew. I know that he and thousands of other
Jews will be saved through our book mailings.
Over the next few weeks we will be mailing
150,000 copies of the Russian version of this
book to Jewish people in Germany, Ukraine
and the United States.

Recently, I interviewed David Herzog and
Pastor Shane Warren before a studio audience
in our new Media and Mentoring Center.
Both men believe we have a limited window of
time to evangelize the Jew. Anti-Semitism will
rear its ugly head as the U.S. economy tanks.
The Jew has always been the scapegoat. And
right behind the Jew will be the Christian. But
God has a key for you to walk in the blessing
of Abraham no matter what happens to the
economy (Genesis 12:3).

Both men told me how God has blessed
their ministry because of their love for the Jew.
Shane Warren said his television network was
losing $80,000 per month. God said when
Shane would start financially supporting
Jewish ministry, God would financially bless
his ministry. Immediately as he obeyed, God
blessed his finances.

David Herzog was told by God that if he
would evangelize the Jew in Israel, God would
then bring revival to France. David obeyed and
he had the longest revival in France in 50 years!
But what David told me next is for
you! David was caught up to Heaven and
spoke with Jesus. Jesus said, “Thank you for
evangelizing the Jew.”
You see, I take young evangelists with me
to observe how I evangelize the Jews through
signs and wonders. David came with me and
now is getting the same results as he holds
Jewish evangelistic meetings.

In God’s mercy on planet earth, I expect
an explosion of miracles. This is why I am
burdened to mentor you through the best
teachers of the supernatural.
After taping our two television shows
with a studio audience, miracles erupted.

We are still getting reports of those who
were healed. I can’t
wait to see what
happens with our
television audience
throughout the
world when the
show is aired.
Many of my
prophetic friends
feel the United States has passed the point of
no return for judgment. I agree. However, we
can and should pray for more time so more
can be saved.

I am determined to help you and as many
people as possible to be red-hot for Jesus! I am
determined to equip you to do the same and
even greater works than Jesus (John 14:12).
And I am determined to make you “normal”!
Thank you for partnering with me for the
salvation of Israel.

P.S. When we raised the money to send
one million Jewish evangelistic books we
did not allow a margin to use for our other
expenses. All your money went into souls.
Now we must increase our income as our
expenses have increased dramatically.
I want you to be under the same favor
of God I walk under. Please pray about
increasing your partnership and watch God
smile on you.