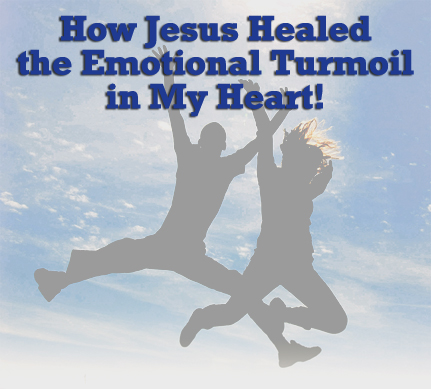 At age 15, when I accepted Jesus into my heart, I felt a wonderful new freedom in my spirit. I was absolutely bursting with joy in the Holy Ghost! However, 25 years later, that freedom was gone and emotional turmoil ruled in my heart. People and circumstances had hurt me, and in response, I had put up walls and embraced negative beliefs which had invited darkness and confusion back into my soul.

When someone hurt me, I remember saying, “People are evil and hurtful, and so I am going to withdraw myself from them.” There you go: I had established an ungodly belief and a corresponding inner vow. The ungodly belief is that people are evil and hurtful, and the inner vow is, “I am going to withdraw from them.” Of course satan and his demons were glad to help me with such beliefs and actions, and so they came and filled my heart with fear and defensiveness.

When Jesus healed this ungodly belief, He said, “Mark, people are hurting and that is why they hurt others. I want you to stay open and vulnerable to people and not withdraw yourself from them. If you do this, I will make you two promises: First, people will hurt you, and second, I will be standing right beside you and if you turn to Me, I will heal the hurt.”

I said “OK, Lord,” and God’s light flooded my darkened heart, as I removed an “anchor” that demons were using to attach themselves to me. This helped clear the way to cast them out through deliverance prayer.

Deliverance was not easy for me to begin to do. I had been taught that demons could not infest a Christian. Then an elder in my church approached me wanting deliverance for an uncontrollable sin. I, along with two other elders, prayed deliverance prayer and cast about five demons out of him. When I checked back with him over the following years, he confirmed over and over that that sin area was now controllable. Deliverance prayer was powerful!

So I entered the deliverance area and cast thousands of demons out of hundreds of Christians over the next several years. People testified to wonderful transformations in their lives. Then came a day when I spent 45 minutes shouting at a demon to leave in Jesus’ Name, but, while the demon would manifest, it would not leave. I had no idea why a demon would not obey the Name of Jesus, since every knee must bow to that Name. So in theological confusion, I stopped doing deliverance prayer.

Then ten years later, I needed deliverance because my heart was wounded and I lived in a state of constant battle with fear, doubt, unbelief, anger, hatred, rage, and several other sins.

I discovered a wonderful Spirit-filled prayer counselor who together with her husband cast about 20 demons out of me in three hours. And I was free again! The war was over! The joy and peace were back! I was thrilled.

I also did extensive two-way journaling where I asked God what He wanted to show me about these areas, so I could think differently and respond when tempted to go back into my old ungodly thought patterns. His daily counsel through journaling was invaluable!

One journal entry which was completely life transforming was this: “Mark, whatever you fix your eyes upon grows within you, and whatever grows within you, you become.” God taught me never to look at my sin or my weakness or my strength, but to look only at Him. This way Jesus grew within me (Gal. 4:19), and I became like Him, because I become a reflection of that which I fix my eyes upon (Heb. 12:1,2; 2 Cor. 3:18; 4:17,18).

The lady who prayed for me and cast the demons out had prayed six other prayers before attempting deliverance prayer. And it was these six other prayers which removed the anchors within me that the demons were attached to. Then, when she got around to deliverance prayer, it was not a 45-minute shouting match. It was a simple command for them to leave, repeated three or four times, and since they had no legal right to stay, they left.

There was no intense shaking or violent manifestation, no protest, because they recognized that their legal right to belong with me was now broken. Now I understood:  You should not try to cast out a demon until you have removed all his legal ground for being there. Finally I had found a smooth, easy protocol for getting demons out and for getting people healed! I was ecstatic and taught people to use all seven of these prayers.

Initially I thought that we should determine which of the seven prayers a person needs, and then offer them only those. However, after working with a number of people, I realized that everyone needs all seven prayers. To me, this is like taking a plow through a field and getting the weedy, neglected ground broken up and ready for a new planting. These seven prayers break up all the hardened soil of our hearts, so we can cooperate with God’s desire to remove our hard heart, and receive the new heart He has for us.

And if a person takes the time to pray a prayer that he didn’t really need, no damage is done. But if a person misses a prayer that is needed, then a root is left to allow the demon back. I decided it is better to be safe than sorry. I now pray all seven prayers with everyone, completely removing all legal rights.

And don’t forget the follow up two-way journaling and Bible meditation. They are essential!

It is crucial that as you apply these seven prayers, they come from your heart and not just from your head. A mechanical recitation of the words will not bring healing. You must use the language of the heart to heal the heart. Through careful Bible exploration, God has shown me that the language of the heart is flow (“…out of his heart will flow rivers of living water” Jn. 7:37-39), pictures (Acts 2:17), emotion (Ezek. 3:14), and pondering and meditation (Ps. 77:6). So as I pray, I need to see what I am praying and tune to the flow of spontaneous thoughts and pictures. For example, in inner healing prayer, I invite Jesus into the painful scene and ask Him to move freely. I watch what He does as the scene comes alive with the life of the Holy Spirit.

Does it work? Yes, my heart is free and has remained free for the last ten years. This story has been repeated by hundreds I have ministered to. It will work for you and for your loved ones!

Wholeness involves letting God’s truth, light and revelation fill us, which drives out demons and their darkness and lies. We can do this on our own, but for greater effectiveness, we can connect with others who are on the same path. I love teaming up with like-minded believers.

Jesus chose to send His disciples out by twos, and the Bible says that a chord of three is not quickly broken. Whenever I recognize a need to grow, I unite with others who are also seeking similar growth, or who are ahead of me in the area. In light of these principles, I make the following suggestions to you:

Learn to clearly hear God’s voice and see His visions. Then apply this skill by praying ALL SEVEN prayers that heal the heart, and do it with a group of friends.

You do not need to live with your emotional pain. God wants to heal it! Let Him!

Dr. Mark Virkler is Founder and President
of Christian Leadership University. He is
also the leader of Communion With God
Ministries, along with his wife, Patti. Listen
to Mark’s radio interview with Sid here.

I recently spoke to a gathering of 200 students at New York University in New York City. Women with Muslim headcoverings were in the audience. As I started speaking, words of knowledge began to flow and students stood up to testify that they were instantly healed. After my talk, I gave an altar call. I had invited three of my Jewish cousins to the event and had the thrill of seeing all three make professions of faith!

I am getting more and more testimonies of Jewish people finding their Messiah. Denise wrote, “I gave your book They Thought for Themselves to a 91-year-old Jewish lady, Frieda, and she accepted Yeshua (Jesus) as her Messiah.”

The Jewish press is in an uproar over our Project 77 in which our goal is to mail They Thought for Themselves to two million Jewish people in North America. Never in the history of American Jews has someone witnessed so boldly to so many Jewish people and had Christians pray for them by name for salvation.

God has given me a fresh revelation of Romans 11:12: “Now if their fall is riches for the world [The blessings of Abraham are on the Jewish people. Even in their unbelief look at how many Jewish Nobel Prize winners there have been and how so many other Jewish people have blessed the world.], and their failure riches for the Gentiles [Gentiles could now be saved], how much more their fullness!” Get ready for the “more”!

I just received a letter that is a preview of what will happen when Orthodox rabbis get saved. A rabbi visited an Assembly of God church in Springfield, Missouri. He was there to gain information for his doctoral dissertation. He wasn’t sure that he believed Jesus was the Messiah, but he told the pastor, “I’ll pray the prayer and if faith rises up in me, I will believe.” After the prayer he sobbed for 30 minutes. Even though he knew nothing about tongues, he started praying in tongues. Then he started prophesying and quoting the New Testament word for word. When he was asked if he had ever read the New Testament, he replied, “I’m in rabbinical school…. We’re not allowed to read the New Testament. I never read this before. I feel like Jeremiah, a ‘fire shut up in my bones….’”

When Jews receive their fullness as quoted in Romans 11:12, their fire will spread to the whole body of Messiah. How would you like this rabbi to influence your congregation?

I have spoken many times on the One New Man (Jew and Gentile together in Messiah Jesus), but when I gave this message recently in Hagerstown, Maryland, the anointing was so high that there were multitudes of miracles. I want you to understand God’s heart on the importance of this end-time message. I also believe many of you will be healed as you view it on DVD. It is my love gift to you. Just let me know on the enclosed card if you would like a free copy of the One New Man: Hagerstown DVD.