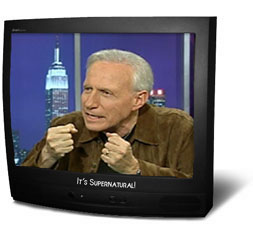 What is interactive television? To me, it is when the Holy Spirit jumps from the television to the people viewing—with supernatural results!

Read some of the many reports of people receiving healing and other manifestations as they view our show, It’s Supernatural!

“I was watching one day and had just tuned in when you spoke of healing in the head area. [For] three months I could not hear out of my right ear and right then my ear opened.” M.P., Ashville, NC

“I have been on disability for 13 years due to a broken back I suffered when my horse trampled me…. As Sid prayed I felt ‘chills’ or ‘electricity’ waves going up and down my spine. Then it felt like a hand on the inside moving my lower spine…. I have not had the pain since!!!!!!!!!” D.O., Darien Center, NY

“You were praying for the sick and rebuking this miserable killer called cancer…. I put my hands on the TV set as a point of contact for my wonderful neighbor [who] was diagnosed with breast cancer…. Two days later…my neighbor shares with me in amazement that she could no longer feel the tumor in her breast and had no pain! [When we went for her surgery appointment] they could find nothing!!! PRAISE GOD. The doctor then wanted to consult with us and tell us he couldn’t understand…. He had the x-rays showing the tumor and cancer mass and then the results from the tests and biopsy that showed nothing!” C.Q., Edinburg, TX

“I was healed of ringing ear during your program.” L.B., Lytle, TX

“I was watching It’s Supernatural! yesterday…. For years I’ve had the start of a cataract in my right eye…. All interference and blurring in my right eye is gone!!” D.D.

“You mentioned on your program, ‘Wait God is healing someone’s neck…and it’s going down the spine!’ I jumped up out of my chair. I had no pain, I could bend over, touch my toes, jump up and down. Praise God!” M.C., Fultondale, AL

“While watching your show, I agreed in prayer along with your guest and the pain I’ve been having in my chest is gone.” C.S., Cheney, WA

“On the day that your television program aired…my severe cervical disc herniations were healed…. Since that day I feel no pain in my neck.” G.

“Sid had a word of knowledge that people’s hips were getting healed…. My hip has not hurt since.” L.G., Midland, TX

“I was healed of a lump on the inside of my right leg below the knee. It was about 1/3 the size of my hand.” D.D., Carrollton, TX

“I was doing something when I heard you say, ‘Someone has a sore neck and a painful hip.’ And I said, ‘That’s me!’ Slowly those pains left me…. These problems have plagued me for two years.” S.P., Cabot, PA

“I fell in a shower on my right knee. Recently, it didn’t just hurt, it refused to work, so I repeated Sid’s words and have been walking in divine healing since.” G.K., Orland Park, IL

“You gave a word of knowledge about aches and pains. I believed and began moving. All the aches and pain in my shoulder and back left.” K.J., Shelby, NC

“Healed of ringing of ears during program.” F.M., Martinsville, IN

“When I was in the seventh grade of school, my doctor told me to bend down and touch my toes. I couldn’t touch them and the doctor said that I must have a stiff lower back. As I got older, the discs in the lower part of my back have shrunk and it feels like it would if you took your knuckles across each other. In the late 1980’s I had two herniated discs in my back and then about 4 years ago I slipped on the stairs and caused the sciatica nerve to go into spasms…. You spoke that someone’s back was being straightened and discs were being recreated in the lower part of the back. I felt something like fingers go back and forth down my spine when you said that…. I bent down and touched the tops of my shoes with my legs straight…. I have attached a picture that I took on the day of the broadcast.” D.I. [Note: See picture above.]

“My son, who is 13 years old now, had suffered since he was a small child from allergies…. He had prayed with you about a month ago…. This has been the worst allergy season in the past 7 years. He has absolutely no sign of any allergy and is completely healed.” J.S., Severna Park, MD

“You gave the word saying, ‘And you at the end of the couch with pain in the neck and back, God loves you so much. Stand up. You are healed.’ I stood up and, praise God, all the pain was gone.” E.M., North Huntington, PA

“[One of your TV guests] said that ‘Doctors told you that you need a total knee replacement.’ And he said to place my hand on the sore knee. I did, and the pain went away and has not returned.” A.W., Northville, NY

“Greetings to you from India! We just watched your program…. We really felt the Presence of God…. Diamond-like flakes began to appear on [my daughter’s] forehead and then all over her body! On her hands, arms, face, legs, etc. My husband and I also had the same thing on us.” S.D., India

“Today marks the one-year anniversary of when I miraculously conceived my baby boy, Joshua-Luke. But why do I tell you this? God used your show to heal me…. I HAD a medical condition where I didn’t have any ovulation/menstruation for over one year so the chances of having a child were virtually impossible.” C.

“I have just been watching your interview…. My shoulder had been very stiff at times and often I could not pick up an object with my right hand…. The shoulder was immediately loosed from all pain.” P.C.

“Sid asked us to put our hands on the television screen as an act of faith…. I stretched my hands toward it and was healed instantly of a severe ear ache.” A.G., New Zealand

“I had my wisdom tooth extracted which caused me a severe jaw condition after which the pain worsened and the gum was not getting healed. In spite of heavy doses of painkillers, the pain did not relent. It was hard for me to even open my mouth half an inch. As I was watching your program, [your guest] mentioned, ‘Somebody’s lower jaw was being healed, and lower tooth too.’ I am healed now.” G.K., Bangalore, India

“When you mentioned a healing of the spine I couldn’t believe it! I opened myself up to it and prayed with you and it felt like it was gone. I’ve waited a couple of days and it is still gone!!!” T.B.

“We watched your program last night and I experienced healing…. I had arthritis in my left knee. Shortly after [your guest] prayed, I found that I had no pain in my knee.” S.L. 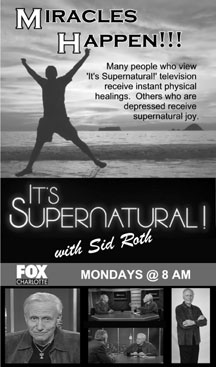 Charlotte Observer Ad Now that you see how God has used It’s Supernatural! on mostly Christian stations, picture what will happen with our show on prime-time on major secular television. Our first experiment is the Fox Network affiliate in Charlotte, North Carolina. This is the number one viewed television station in Charlotte. The popular morning news program is on from 7:30 to 8:00 a.m. Our show immediately follows the news. Although they have a high viewership we are increasing it by running quarter-page ads in the largest Charlotte newspaper, The Charlotte Observer (see our ad at right).

Now picture our television show in Israel. We are on prime time at 10:00 p.m. every Monday (currently, it airs at 6:00 p.m., but will shortly change to 10:00 p.m). We are available to virtually every home in the nation of Israel! We will offer our highly respected evangelistic book, They Thought for Themselves, in three languages. It is our intent to also run newspaper advertisements in Israeli newspapers.

How would you like to be a fly on the wall in Israeli homes at 10:00 p.m. every Monday? God is increasing the anointing on our television show as well as on my public speaking.

Recently I spoke at Pastor Steve Gray’s church in Kansas City. This was the tenth anniversary of the Smithton, MO Outpouring. As I was worshipping God before I spoke, I kept hearing the most beautiful shofar (ram’s horn) blasts. When I got up to speak, I asked for the person who blew the shofar to come up on the platform. No one came forward, but others also said they heard the shofar.

Then at the end of my message I prayed for people to receive a burden for the Jew. The power of God was so strong that I fell forward and hundreds of people fell out of their seats. It looked like a war zone. God is serious. This is the set time to favor Zion (Israel).

I expect the reports of people feeling a tangible presence of God as they watch our show to increase. I believe the greatest miracles in history will shortly be released. Can you hear the supernatural shofars blowing?

Thank you for partnering with me to reach the Jew to spark the greatest Gentile revival in history.

“Since the Gentiles received the wonderful spiritual blessings of the Good News from the Jewish [believers] in Jerusalem, they feel the least they can do in return is to help them financially” Romans 15:27, NLT.

For I was recently approached by an officer of the Full Gospel Businessmen’s Fellowship to brainstorm on how as an organization they could reach Jewish businessmen for Yeshua.

When I attended their meeting, I sat under the ministry of Dr. Charles Dixon. He is a prophet from Giuyana, and he and his wife, Beryl, prophesied over me. He had never met me or heard my name. (That means he did not know I had a Jewish ministry or TV show.) I have never had a prophecy like this before. They spoke forth the major prophecies I have received over the last 30 years. It was as if God was saying this is my breaker year in which all these prophecies will start to come to pass.

Here are a few of the highlights.

God says, “I’m going to put a fire into you like Jeremiah…. I’m going to give you a burden for the Jews and I’m going to use you to minister to the Jews…. I’m raising you up as a Jeremiah of your generation….”

When I shook your hand, I saw something like satellites beaming. Whatever you do, your face is going to be known…. You shall speak miracles in the airwaves so people’s lives shall be changed and transformed…. [God is] bringing new technology for the airwaves…. You’re going to get this and move into it…. You are going to begin to interview people around the world.