It’s hard to believe. February 2, 2007 is the 30th anniversary of the Messianic Vision! It seems like I started the ministry yesterday. 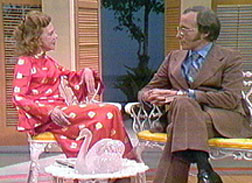 Coming from an Orthodox Jewish background, I had an encounter with Jesus in 1971 that changed my whole perspective on life. Even before I had read the entire New Testament, I became an instant celebrity in my newfound faith. (Back then there were not so many Messianic Jews.) It’s a miracle I survived.

A major newspaper in Washington, D.C. ran a front-page article entitled, “White Collar Jesus Freaks.” I was featured on the front page. Kathryn Kuhlman’s staff saw the article and booked me to be a guest on two of her national television shows. (See picture at right of Kathryn interviewing Sid.)

Then God used me and a few other Jewish believers to found one of the first Messianic Jewish congregations since Israel became a nation. Those early years were great. We started just as God was pouring out His Spirit on Jewish people and many future leaders of the Messianic Jewish movement came to the Lord. Every week Jewish people were being saved. This was heaven on earth to me.

God so blessed me in business I was able to volunteer to help Manny Brotman, the Messianic Jewish rabbi of our congregation. Manny taught me how to evangelize the Jew. We also started a radio program together. Manny was to be the host and I, the announcer. But because he was always busy at recording time, I was forced to host the show. I never would have thought I could host a radio show. I had been an account executive with Merrill Lynch and was more interested in the business side of ministry. But God had other ideas and after a while it became obvious I had found my niche.

Then in 1977 I started the Messianic Vision radio broadcast. I began interviewing Jewish people who had become believers in Jesus. But after hundreds of interviews I got bored and began to learn to yield to the Holy Spirit. I expanded the broadcast to include other topics such as miraculous healing and intimacy with God.

After the Soviet Union crumbled, I accompanied my friend Jonathan Bernis on his first Jewish evangelistic outreach trip to St. Petersburg, Russia. I spoke at the opening meeting and we both were ecstatic to see thousands of Jewish people running to the altars to be saved. This was the first time in 2,000 years such a large number of Jewish people had come to their Messiah.

About that same time, I planted a congregation in Brighton Beach, New York to reach the 100,000-plus Russian Jews who lived there. This congregation was one of the loves of my life. I used to drive five hours every week to New York from Washington, DC during those formative years. Many of my meetings needed police protection and police barriers as our Jewish evangelism upset the Orthodox Jewish community. We had a great harvest of Russian Jews.

In recent years, I have conducted large, fruitful Jewish evangelistic meetings in the former Soviet Union. But the most productive evangelistic outreaches have been lectures on the supernatural. We filled auditoriums in Israel and Germany by advertising a demonstration of miracles. (At right Sid is witnessing to young men in Israel.)

My third book, They Thought for Themselves, was birthed in a dream. God told me more Jewish people would be reached through this book than anything I had ever done. Today it is in seven languages and we have distributed over 500,000 copies of the Russian edition mostly to Jewish people throughout the former Soviet Union. The Hebrew edition is being passed out in the streets of Jerusalem and is considered the best Jewish evangelistic book in Israel. Only heaven can count the number of Jewish people who have been saved through this God-given tool.

In 1995, someone donated $25,000 to fund the production of the first episodes of our television show, It’s Supernatural! I found myself so nervous. I never thought the program would evolve into a worldwide television show. It’s Supernatural! is a show that demonstrates the power of God. We grab the attention of the non-believer by bragging on God and then tell people how they can come to know Him. The show is so powerful we are getting large numbers of reports of healings taking place as people view it. My heart is to demonstrate to Christians and non-Christians that the invisible world is more real than the visible world. (At right Sid is on the set of It’s Supernatural! with guest Dr. Michael Brown.)

Last year I turned 66. I feel everything I have done has prepared me for this hour. I was amazed when as a young man I went to Hollywood and saw Kathryn Kuhlman tape five TV shows in one day. I remember asking my wife, “How can she have the energy for five shows?” God must have been smiling. Today, I do nine or ten shows in one day.

But all that is about to change. This year I will go to one show per week with a live audience. The show will be aired live or within a week. This will allow me to comment on prophetic news events. Currently, we have up to a four-month delay before broadcasts air.

We also are producing secular TV specials that will promote the English version of They Thought for Themselves.

Thank you for joining with me as I have reminisced on my first 30 years. Dare I say the next 30 years, if the Lord tarries, will be our most fruitful. God has saved the best wine for now. Together we will embrace the last and greatest outpouring of God’s Spirit. We need each other. Our strategic partnership will make 2007 the greatest soul winning year in history. The best is yet to come!