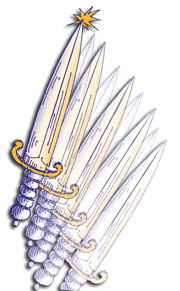 Many of us, especially those of us who came up in “Word” churches or “Faith” churches, are very familiar with the idea of using the written Word of God in spiritual warfare. Some of us have become adept at finding scriptures that apply to the problem at hand and wielding those scriptures like a sword, warring in the spirit.

The practice of using scripture to form a prayer is ancient, even in Christianity. Some of the noted intercessors throughout church history have made a regular practice of giving scripture back to God in prayer. And that is how we have interpreted Ephesians 6:17, in which we are exhorted to use the “sword of the Spirit, which is the word of God” as a spiritual weapon.

It’s interesting that the underlying Greek for “word” in that verse is rhema. Some have taught that this word means “spoken word.” It actually means “sayings,” in the sense that a body of written or spoken words about one topic would be made up of many component “sayings.” What the word rhema does not do in the context of Ephesians 6:17 is limit the interpretation of the phrase “word of God” to the written Word of God, that is, to scripture.

And that stretches our thinking. If we can use that verse as an exhortation to use the “word of God” in prayer, what about doing warfare with the “word of the Lord”? By this phrase, “the word of the Lord,” I am referring to prophecy—mostly to what some call “personal prophecy.” This is the sort of prophecy spoken over an individual or maybe over a ministry you pray for, like Messianic Vision.

Recently I have been thinking about a verse in 1 Timothy 1. The apostle Paul is mentoring his son in faith, Timothy, as he steps into a new level of ministry. In verse 18 of chapter one Paul writes, “This charge I commit to you, son Timothy, according to the prophecies previously made concerning you, that by them you may wage the good warfare…” [emphasis added].

Wait a minute. It sounds like Paul (who also wrote the famous passage on spiritual armor in Ephesians 6) is saying to Timothy, “Take those prophecies that have been spoken over your life and wage war with them. Use them like spiritual weaponry.”

How does one wage war with a prophecy? Several ways. The most obvious way is by releasing faith-filled words. First, we evaluate the words of such a prophecy. Then, if we are convinced that the prophecy is really from God, we can speak it out in prayer. We declare it over the person or ministry it refers to, in effect wielding that prophetic word like a sword and doing battle with it.

Furthermore, we can so encourage ourselves and build ourselves up in faith concerning the prophecy’s content that it begins to transform our own behavior and character. This transformation occurs as we meditate on the prophetic word and its revelation about how God sees us personally.

On a practical basis, here are some ways to wield a prophetic sword. If you have the prophecy on tape, transcribe it. If it’s more than a sentence or two, try to break it up into meaningful paragraphs to get the flow of it and to discern themes and patterns, especially of repeated words or phrases.

At all points, compare what the prophecy says with what scripture says about similar subjects. This is key to remaining free from deception by a false prophecy.

After you’ve checked with scripture, begin to pray over the prophecy in your daily prayer time. Write down any insights God gives you. Consider rearranging your written prophecy so that every sentence is its own paragraph. As you grow in confidence that the prophecy does not violate anything in the written word of God, meditate upon each sentence so that you can extract the meaning from it.

Let it sink deep into your heart. Now you are in position to pray it and live it out. Thank God for how He sees you. Thank Him for the future He is showing you for this ministry. Agree with Him for these things to come.

By so doing, you will pull the future into the present. You will prepare the way for the Father’s kingdom to manifest in the earth and for His will to be done in your life and in the ministry for which you pray.

Let’s begin by believing God for the prophecy given by Kenneth Hagin to Sid. I believe that as you sow into this prophetic word to Sid, it will “splash off” on you.