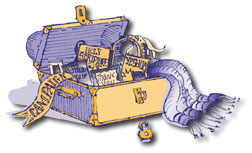 I spent an entire work day recently supervising the cleanout of a house where a 95-year old woman died two months ago. This woman had enjoyed some notoriety in the local press for the last few months of her life because of her financial predicament and the creative way in which it was resolved.

You see, she lived in a house that had been designed by a famous architect nearly 100 years ago. The house was falling apart, and the woman lacked the finances to both repair the house and continue to live in it. A neighbor took pity on her and bought the house, granting her the right to live there for the rest of her life—which turned out to be less than three months.

When she died, the woman left everything to two local art schools. Her husband had died five years earlier, and they had no children. She had made her living as an art teacher and freelance artist, and some would say that the crumbling house she lived in for over 50 years was also a work of art. But now every physical remnant of her life on earth was being packed into a storage bin or swept into the garbage.

I went through some of her personal belongings, looking for important or valuable documents and financial statements. Some of what I found was what I expected: old greeting cards from friends, old photos from world travels, newspaper clippings about events and social groups that no one else cared about.

I couldn’t help thinking about another woman whose personal belongings I went through about a year ago. My task was the same: looking for important documents. But this other woman was so different from the artist. I remembered this other woman’s files full of notes and references to churches and mission societies and the Bible school from which she graduated.

I remembered the last time I had seen this other woman. She lay in some discomfort, dying of cancer, and I asked if I could pray for her healing. She thanked me and, after listening patiently to my prayer, asked if she could pray for me. What a privilege it was to be prayed for by her.

She too died childless, but she had arranged to give a significant portion of her estate to a number of Christian mission organizations, including several that ministered to Jewish people.

Yeshua said to us, His disciples, “Lay up for yourselves treasures in heaven, where neither moth nor rust destroys and where thieves do not break in and steal. For where your treasure is, there your heart will be also.” (Matthew 6:20-21).

The irony is this, my brothers and sisters: the estates of both of these women were nearly equal in monetary size, but one woman took a moment to make an eternal decision that she lived by for the rest of her life; and that one has laid up treasures in heaven, through her prayers, through her faith, and through her giving, even in death.

Go thou, and do likewise!