Praying Up a Rainbow 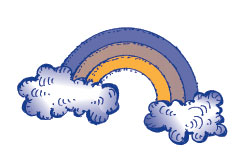 Recently, my co-coordinator for International Prayer for Messianic Vision, Carol Howell, and I were having a discussion about the many voices of prophecy ‘out there’ today. Some speak of revival while others warn of impending judgment. What are we to believe? And how are we to respond?

We live, as you know, in prophetic times when God is doing great things in the world. The prayer movement alone is unprecedented in all of history and the earth is being encircled daily with prayer, intercession, petitions and worship. Kingdom work is being done in the spirit realm. A battle is being waged. You may hear reports from the media that sound like the devil is winning but most of that is the Bad News. We’re people of the Good News. Those are lies. We have the truth. God wants you to pray hope-filled prayers based on what He has already said. He is faithful to His Word. Our part is to believe it and agree with Him in prayer and proclamation.

A man who has been to heaven and returned tells us that in heaven, prayer, intercessions and petitions can be seen separately, each visibly being made up of different colors, with light of various intensities flowing through and from them. They carry with them sounds like music he’d never heard on earth. He was able to see the effectiveness of the prayers. Declarations of the Word are the most effective, he reports, especially when citing precedent of how that verse proved victorious before. Being a visually inclined person I found this greatly inspiring.

But what about these prophetic words?  One prophet can feel the hot breath of judgment even now while another boasts of God’s last days’ bride-readying, life-transforming Revival being nearly upon us.  Which is it?

Both. They go together. God always welcomes hearts that welcome Him and those who scorn Him will find themselves ultimately rejected by God who cannot allow rebellion and anarchy in His Kingdom. God is always against rebellion and He is always gracious toward obedience. He always loves, even the rebellious person, so He deals with the rebellion, not to throw the person away but to save them. Our part is to pray for the lost and the rebellious, expecting God to save them. He is equal to the task. But we must pray. He will not do what we will not ask Him for or agree with Him about. It’s part of the package of giving us free will, which too, is about love.

There are two questions as Carol and I see it. Are all the voices we are hearing from the Lord? and What are we to do with the many prophetic voices we hear today?  We are concerned when a prophetic word comes forth with a negative tone of soon-coming trouble but the speaker doesn’t take the time or feel the motivation to pray for protection or to turn the tide. Are they fatalistic? Are they unaware of what the Bible has to say? Do they see only a growing darkness? Are they anticipating a massive falling away from truth? Are they of the camp that sees the world coming inevitably against Israel, or perhaps unaware by their attitude toward her that they are reaping the wrong fruit of God’s Genesis 12:3 promise to Abraham?

Perhaps, due to church doctrines which teach these things as a one-sided coin of truth, their ‘faith’ and expectation is that the worst will happen. Do they not see that there is another side, the God side; that God has promised glory in the darkness (Is. 60:1,2)? He has assured us that there will be a faithful remnant who, in the midst of a falling away, will shine brightly as the stars in the sky as they lead many to righteousness (Daniel 12:3). And though all the world be against Israel (Zech. 12:3, 14:2) the Lord Himself will go forth and fight against those nations on Israel’s behalf (Zech. 14:3) and He will take away His judgments against her and clear away her enemies (Zephaniah 3:15). In the end, all Israel will be saved. (Romans 11:26).

One thing I learned from Carol several years ago is that when the Bible predicts something, it will eventually happen, but pray that it doesn’t occur before God’s time or in a way that is not God’s way. Don’t be fatalistic and resigned. Pray that only God’s will be done and His purposes accomplished.  Be discerning of what you listen to and be careful to respond in faith.

We must take every word that’s spoken and put our hope in God for His goodness to pervade the earth, for Him to bring good out of what is not good, and for Him to bring salvation where there is destruction. When a Word of impending judgment comes forth, cry out for mercy. Cry out in repentance — even if you aren’t guilty, collectively we all are. Forgive everyone as an act of intercession.

God will respond to the crescendo of our prayers and when the heavenly bowl of incense, which are the prayers of the saints (Rev. 5:8), is filled and tips over, Revival will come! He will pour out His goodness and mercy upon thousands who lift their hearts and faces and hands to Him in joyful worship, sweet surrender and confident prayer. Revival comes with mercy and His mercy comes in strange ways sometimes. Judgment too can be mercy designed to bring the person, or the nation, to repentance, to see their need for Him. We know that not everyone will respond. We do have free will. Ananias and Sapphira are the prime example of that when they lied to the Holy Spirit in the midst of the greatest Revival the world has yet ever known (Acts 5:1-11). When Grace abounds, so also does judgment.

We who stand on the walls for Israel as watchmen (shomerim) know these days are critical. As in any war, there will be casualties. But our prayers make the difference between despair and hope, between God’s intervention or not. If we don’t care, He will wait until we do to act on Israel’s behalf. The same applies to our fellow-Believers who are suffering in persecution, and for that matter, for Revival to happen. I am convicted by my own words as I write so I assume these do come from the Lord.

When we pray and agree with God and His Word, we send glorious shimmering rainbows of light and color up to the throne of our Father. Perhaps they make up the rainbow that surrounds the throne. Believing that our prayers matter, and that we are partnering with God in the establishment of His Kingdom, is an incredible astounding reality when you think about it. Little me, in my rocking chair in my room, can touch the throne and the heart of God. Awesome!  As we do we are sowing seeds of what will become mighty oaks of righteousness under which we — and those we are praying for — will one day sit, when all is as it is in heaven on the earth.  I look forward to meeting you under that tree in glory one Very Fine Day.

Till then, thanks for being on the wall with us.