Palestine:  Not a friendly place for Christians 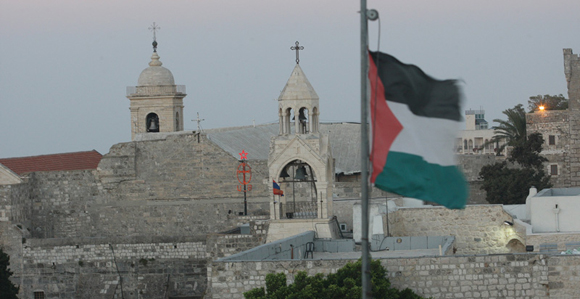 View of the Church of the Nativity in the city of Bethlehem where Yeshua the Messiah was born. (Photo: APIMAGES)

Then it hit me. The host must be talking about the decline of Christianity among the Palestinian Arabs living in the West Bank. The West Bank, historically known as Judea and Samaria, is referred to as such because it is the area that Israel captured from the western side of Jordan in the 1967 war.

Although the West Bank is still technically Israel, there are areas completely controlled by the Islamic Palestinian Authority. One of those areas under complete Palestinian control is Bethlehem, the birthplace of Messiah Yeshua and King David.

According to the New York Post, Bethlehem boasted a 70% Christian population 50 years ago, and today it is less than 15%. Some journalists have tried to tie the decline of Christians in Bethlehem to the “Israeli occupation.” But the fact is the decline is widespread in Palestinian-controlled areas because of Islamic oppression.

Under the rule of Muslim Yasser Arafat, founder of the Palestinian Liberation Movement (PLO), the overall Arab Christian population declined some 30%. This decline took place largely before the security wall was built that separates much of the West Bank from Israel proper, or other restrictions were put in place.

In the early 2000’s, when the second Intifada (uprising) began, Christians who did not embrace the Islamic anti-Israel agenda were shunned. The increasingly hostile Muslim society made it difficult for Christians to own land or run thriving businesses. As a result, Christian Arabs fled Bethlehem by the thousands.

The fact is, the only place in the Middle East where the number of Christians is increasing is in Israel!

SAVING CHRISTIAN ARABS FROM WHOM?

Sadly, many Christian organizations spend their efforts and resources crying out for Palestinian justice (which in their mind could only come about in the form of a Palestinian State). “Free Palestine” and “Israel Apartheid” campaigns, among others, bear the signatures of powerful Christian leaders and sometimes entire denominations.

I could make several arguments against such a move via Scripture or simple historical precedent. However, there is one main, significant issue that needs to be addressed when considering a cause to which Christians should or shouldn’t support. This issue is one that surpasses political and ethnic dynamics. The issue is freedom of religion.

When the founding fathers of the United States of America sat down to write a list of things they considered a “must” for their new country, the freedom to worship God apart from governmental control was at the top of the list.

In the same manner, before we followers of Yeshua give our backing to any cause, political or otherwise, we must consider the implications this support will have on the local Body of Messiah. To be more specific, before Christians get behind the forming of a Palestinian State for the sake of justice, they should consider the freedom – or lack thereof – that Christians will have in said state.

PORTRAIT OF A FUTURE PALESTINE

To those who embrace the “Free Palestine” campaign, I would say, “Define freedom.” Should “Palestine” be suddenly freed from the “oppressive Israeli regime?” Exactly what type of freedom-loving leaders would you envision taking the place of the “Jewish oppressors?” Where would they come from?

It’s often hard to predict what the future will look like, but in the case of the “Palestinian cause,” we need only look at areas currently controlled by the Palestinian Authority. We recently spoke with several Palestinian Arabs who were born and raised in the area. Some came from Muslim backgrounds and have family members serving prison time for terrorism; others are from nominal Christian backgrounds.

When we asked them if we could post blurred photos of them alongside this article, they declined for fear that the Palestinian Authority would somehow find out who they are. Their descriptions of corruption and an ideologically-run society are mind boggling.

“We almost never pay taxes. Before Israel became a nation, there was no organized country to which we belonged so it is not in our culture to pay taxes. Occasionally, if the Palestinian Authority wants to arrest someone without legal backing, they will arrest him for ‘not paying taxes.’ That’s when you know the PA is just mad at him for something else.” Note that despite media propaganda, many Palestinians know the Israeli government is more just than their own and feel their lives would be safer and better off in Israel rather than in a future Palestine.

They continued to explain how the rule of law works. “We don’t get theft insurance for our cars. There are very few thefts in the West Bank when it comes to Palestinian cars. Thieves usually steal cars with yellow [Israeli] plates rather than ones with white [Palestinian] plates. This is because the thieves are scared they may unknowingly nab the car of someone with connections to people of power in the government.” In the Palestinian-controlled areas, the people of power function like the Mafia.

The Palestinian Authority also forbids selling land to Jews. The penalty is death. But Palestinians still do it, and they will gladly be hired to build the homes of the Jewish people who bought the land. Because whenever they can work with Israelis, they know they will get a decent wage. This is the truth about how settlements are formed.

WHICH SIDE OF THE BORDER?

I recently visited a conservative Muslim Israeli-Arab family. They have lived in the Jerusalem area for generations, and we visit them often. As the young children of the clan played with my kids in the yard, I chatted with the family patriarch, his five daughters, two sons and their spouses.

They know we are Jewish followers of Yeshua, but there is mutual respect, and we speak freely about anything. Having grown up in Israel, I have a pretty good understanding of where both sides stand on the basic issues of land, religion and politics. But we always like to listen to an individual’s perspective, especially since we know Arabs rarely voice their opinions publicly for fear of retaliation.

I asked them each, should there be borders established for a Palestinian country, would they prefer their neighborhood to end up on the Palestinian side or the Israeli side. I asked this because polls have shown that many Palestinians want there to be a Palestine ideologically, but they don’t actually want to live there.

Their answer confirmed the confusing poll. They favor the idea of a Palestinian State but said the Palestinian Authority has built no infrastructure, no health care, no electrical structure, and no water system. The infrastructures used by Palestinian Arabs were all built by Israel, many of which are still maintained by Israel.

Wanting to understand their deepest reasoning for still wanting their own state, I pressed several times for an explanation. Finally, one of the daughters explained, “In Islamic religion, when Israel is destroyed, it’s the end of the world, so we never think what will happen the day after.”

This wasn’t something she actively supported; it was just something that was predicted to happen according to the Koran and as a Muslim she accepted it. Could her perspective shed new light on why perhaps neither Palestinian leaders from Hamas or Fatah do anything to build a vision for the future of the Palestinians? Maybe it explains why their information campaign never goes past forming their own country. Is it possible they are trying to create a country they don’t ever plan to live in?

While Israel has some minority groups that make it their business to stifle freedom of religion, by law we are allowed to worship God freely, and the courts will defend our right to do so. However, the Palestinian controlled areas are religiously oppressive (as is the norm in any Muslim dominated society).

Freedom of religion – especially when one has abandoned their Muslim roots for belief in Yeshua – is not defended in the Palestinian judicial system. There have been many reports of Christians forced to convert to Islam as well as claims that Hamas exhumed and burned bodies of buried Christians.

Images of supposed injustice around the world can conjure up deep emotions in caring individuals. But we must be careful, especially in our modern age where images can be cut and edited to say almost anything. Islamic radicals have spent decades studying Christians and western culture. They know just how to present things to hit the hot buttons of Christian compassion.

So the next time you or your friends find yourselves pondering which “side” to stand for, remember it’s more about figuring out where God stands on the most important issue – His relationship with all people. While I could give you a list of things I would like changed in my homeland of Israel, at least here we can spread the Word of God and both Jews and Arabs are free to make their own choice. On the other hand, those who live under Islamic rule – as citizens of a future “Palestine” – would never enjoy the free spread of the Gospel, nor the freedom to choose to worship their Creator.