The Branding of Palestinian Christianity: The church surrounded by the wall which separates the West Bank
from Israel proper and which keep terrorists out of Israel, but is inconvenient to Arabs in the West Bank.

The Messianic Jewish community in Israel has just experienced a searing and wrenching event as we watched live streaming of Palestinian Christians in Bethlehem hosting an incredibly sophisticated attack against the existence of Israel.

Their tongues were smooth as they expressed their great love of the Jewish people and at the same time described the injustice, the evil and immoral occupation of Palestine and crimes against humanity by the criminal state of Israel.

The speakers at the Christ at the Checkpoint conference demanded that the security fence/wall and checkpoints be taken down (which would of course allow the return of suicide bombers crossing into Israel again). They demanded that Arabs be allowed to return to their “ancient homeland,” meaning giving the Holy Land to the Muslims. (When you see the word, Palestinian, read “Muslim,” as 99% of all Palestinians are Muslims.)

They explained that the Israel of today has nothing to do with the Israel of the Bible. In other words, the Old Testament scriptures concerning Israel are no longer in effect. The offspring of Abraham that the Bible talks about, they said, is only about Jesus, not the Jews.

And they further stated that any promises concerning Israel have only a spiritual application and therefore literal interpretation is false. Consequently, the Conference concluded, the modern State of Israel is not in any way a fulfillment of Scripture.

In all the live streaming I was able to listen to, I heard nothing about terrorist attacks or threats to exterminate Israel. Rather I heard pro-Palestinian activists from England and the US telling how they confront Israeli soldiers serving in the West Bank and challenge them to go AWOL because of their crimes against humanity. I heard calls for economic boycotts to collapse Israel’s economy.

The central focus of the entire conference was the suffering of Palestinians as the result of the illegal occupation of Arab land by the illegitimate state of Israel.

Yet there was no awareness that the surrounding Arab nations that want to exterminate Israel are the major cause of Palestinian suffering.

(Incidentally, I was wondering if these same Arab Christians would be ready to trade places with the 1,000,000 Israeli Jews in southern Israel who are racing to shelters every few minutes as a result of more than 200 rockets launched against them from Gaza over the last three days.)

To use a cliché, we must now expose the elephant in the room. Why this rage and hatred towards Israel from the Arab Christian Church in the West Bank? Why have they latched on to Replacement theology? So simple: Because they are afraid of Islam.

Look at these figures: According to Looklex Encyclopedia, in the West Bank and Gaza, only one percent of the population is traditional Christian, and 1/10th of one percent is Protestant.

In fact Looklex states, “Palestine [i.e. West Bank and Gaza] is today perhaps the most homogeneous society in the Middle East in matters of religion, being the only country with close to 100% of its population belonging to Sunni Islam.” https://looklex.com/e.o/palestine.religions.htm

In short, the tiny group of Arab Evangelicals in the West Bank and Gaza are swimming in a dictatorship of 4,000,000 Islamists. It is no wonder that at the Christ at the Checkpoint conference, the word Muslim or Islam was barely mentioned and the subject of existential threats and terrorism against Jews was not mentioned at all.

Anti-Israel Palestinian Christians are unconsciously or consciously forced to blame Israel for the huge decrease of Arab Christians in the West Bank and Gaza over the last few decades. But here is an interesting statistic that contradicts such propaganda. Why is there no more than one percent of Christians left in the sea of Muslim “Palestine,” whereas in Israel, 10% of Israeli Arabs are Christians?

The facts are obvious: there is no place in the world where Arabs have more freedom to worship as they choose as in the state of Israel. But Christian Arabs in the West Bank will argue that for the most part the Islamists leave them alone. Mostly true, as long as they don’t start evangelizing Muslims! That’s a whole different scenario.

The miniscule number of Christians in Gaza makes them especially vulnerable to Islamic fanaticism and their lives are constantly in danger with Hamas at the helm. And if Hamas succeeds through “elections” to take over the West Bank, Arab Christians and Israeli Jews will both be under constant attack.

Yet these Arab Christians at the conference are convinced they want to see the Jewish state vanish. They don’t believe Israel has any promises yet to see fulfilled.

As one Messianic Jewish leader, Yosef Shulam, lamented, “Christians in the West Bank and Gaza don’t realize that their best friend is Israel and their best hope is in Israel. The day will come when these Arab Christians will wish Israel would be there for them, and will call for Israel to come and help them just like the opposition in Syria is doing now.” 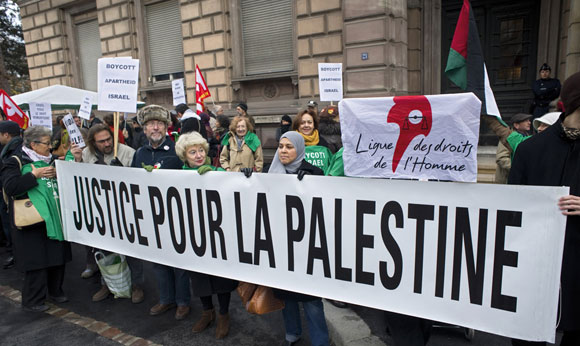 French pro-Palestinian activists protesting the arrest of other activists by French authorities.
Those arrested were charged with “inciting discrimination, hate or violence” through boycotts against Israel.

IS THE CHECKPOINT CONFERENCE SIGNIFICANT?

But what is the big deal with a conference in Bethlehem attended by 600 people? The danger is that strident anti-Israel, anti-Semitism, cloaked in the “love of God for our enemies (i.e. Jews)” is so beautifully wrapped in churchy language that many Evangelicals in the West could be (and sadly probably will be) deceived and hoodwinked into believing that the Church has replaced Israel and that the state of Israel has caused the Palestinians incalculable injury and injustice.

By putting on sheep’s clothing, the Palestinian Christians can do far more damage to the people of Israel than even Muslims can. The Christian terminology sounds familiar, the jargon is spiritual, but the end goal is the destruction of Israel. That’s what Replacement theology allows.

If you will take the time to absorb the information in the following article by Avner Boskey, one of the most scholarly Messianic Jews in Israel, you will understand the deception of Replacement theology that so many Evangelicals have not grasped.

I cannot conclude this article without saying that there are wonderful Arab believers more in Israel but also a few in the West Bank and Gaza (who are severely persecuted by their Replacement theology colleagues) who know what the Bible says, and have decided to believe God’s Word and put their lot with Israel as Ruth the Moabitess did, rather than be intimidated by the violent threats of the Islamic religion.

We not only love them, we look for every way to work together with them to advance the Kingdom of God with Jews and Arabs. Our excitement and gratitude is equal whether a Jew or an Arab receives salvation.

And do we think that Israeli politicians and soldiers are all examples of morality and compassion? Of course not.

Do we care about the suffering of Arabs? Yes!

Do we want to see them saved? Yes!

Do we want to see them curse themselves by cursing Israel? No!

Cursing Israel will surely keep spiritual revival and physical well-being from coming to them, and will trap many innocent and naïve Christians around the world.

Sadly, when liberal leftist professors and intellectuals from the US and Europe claiming to be Christians and spewing hatred of Israel combine their poison with the Arab Christians in the West Bank and Gaza, whose life narrative is to tell how the Jews are causing them to suffer great injustices, the combination is lethal. It makes for nothing less than another arm of Satan to attempt to destroy the nation of Israel that God has brought back to His Land in these last days.

Thank you for your fervent prayers,
Ari and Shira Sorko-Ram

Ari and Shira Sorko-Ram are the founders of Maoz Israel Ministries. The mission of MAOZ is: 1) To declare the Message of Messiah and make disciples in the city of Tel Aviv and throughout Israel. 2) To raise up Israeli leaders to prepare for the coming spiritual awakening among the people of Israel. 3) To educate and inform Christians world-wide of the strategic importance of Israel and the Jewish people in God’s plan for world revival. The MAOZ web site is https://www.maozisrael.org/.