The result of Revival is largely the restoration of Truth as our lives are impacted by the Lord Who is Truth. True Revival exposes lies for what they are and 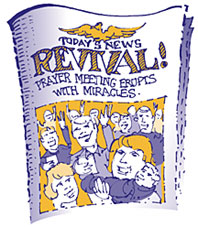 we realize we’ve been living under deception. Suddenly we see that sin, whatever form it took, will not bring us what it promised.

In contrast we see that God and His promises can be trusted. By His Sovereign Grace, He begins to unite our hearts with His.
When Israel departed from the ways of God, it was because they departed from His warning to them not to take upon themselves the ways of their pagan neighbors. They believed the lies that foreign gods and idols would protect or provide something for them they didn’t think God would or could. They trusted in what was false. Idols are defined as “non-existent things.” In other words, there is no truth or validity in them. Then some remembered the Truth of God’s covenant to them and soon there was a cry to restore Israel to God until His ways became their ways once again, by His grace and mercy.

When England was in desperate, cruel and drunken poverty in the 1700s and crime was the way of life, a few with a heart for holiness began to pray, calling out to God in repentance that His ways would rescue England. Their prayers leaped the Atlantic and a Rev. William Tennent, a Scots-Irish immigrant, and his four sons began to pray fervently. These initial prayers gave birth to the Great Awakening which began in 1730 and continued in waves for decades. Millions were saved from evil and from Hell because people began to pray.

The Azusa Street Revival of 1904 came about because a few began praying and asking God to manifest the reality of His Word in their midst. In other words, these few believed His Word and they trusted in Him to confirm it with signs and wonders even when no one else did. But God believes His Word and He met them in their faith! God longs for us to believe His Word enough to respectfully but passionately cry out to Him to confirm it among us, bringing honor to Himself.

We today may be candidates for a greater manifestation of God’s glory than any peoples have known, including in the first century, if that is imaginable. As the latter (temple) was to be greater than the first (temple), if we extend the metaphor, we who are the Temple of God in whom He dwells, may as End-Time saints of God, experience an even greater glory than our first-century brothers and sisters!

God — who is Truth and Who cannot lie — makes the statement that at some point, “Darkness shall…[be upon] the people; but the Lord will arise over you, and His glory will be seen upon you” (Isaiah 60:2). He spoke those words to Israel (Selah!), but today the same moral malaise exists in Israel as well as in America. Take a look and a listen around you. Do you have any doubt both America and Israel are surrounded by darkness? And it’s a growing darkness. The acceptable norm today would have horrified us in the 1950s. Slowly, slowly, the dimmer switch of Righteousness and Truth is being turned down at an alarming but largely unsuspected rate, except to a remnant with ears to hear what the Spirit is saying. America and Israel are believing the lies of the evil one.

Pilate asked Yeshua, “What is truth?” Whether Pilate meant it rhetorically or not, Yeshua didn’t answer that He was The Truth. Those who know and trust in Him, come to see Him as the manifestation of Truth and in that understanding, lies are exposed and we can then come out of agreement with them. Where we are not living in faith and trusting in Yeshua we are, somewhere, believing a lie — a lie that He is not all the Bible tells us He is. Sanctification is the process of recognizing and exchanging the lies we’ve believed for the Truth that He is.

Certainly not all of Israel presently believes that Yeshua is “truly” the Divine Son of God and Atoning Messiah. Indeed, not all who see themselves as Believers, whether Jew or Gentile, believe all the Word says He is either. We often believe selectively, not always embracing the whole Truth, and nothing but the Truth. It is not only Israel that needs Revival, the church also needs to believe the whole Truth — including the Truth about God’s intention that “all Israel be saved” as this issue is pivotal to seeing God “in truth.” It will happen as we pray.

It has been said that “History is written by the Intercessors.” That is, those who pray determine how things go. We sit on the cusp of history, dear fellow-praying folk. In our crying out to God for Revival and for His Truth to be manifested in the earth, we are united with the heart of Yeshua when He taught us to pray, “Your Kingdom come. Your will be done on earth as it is in heaven” (Matthew 6:10). May it be soon.

See you on the wall,