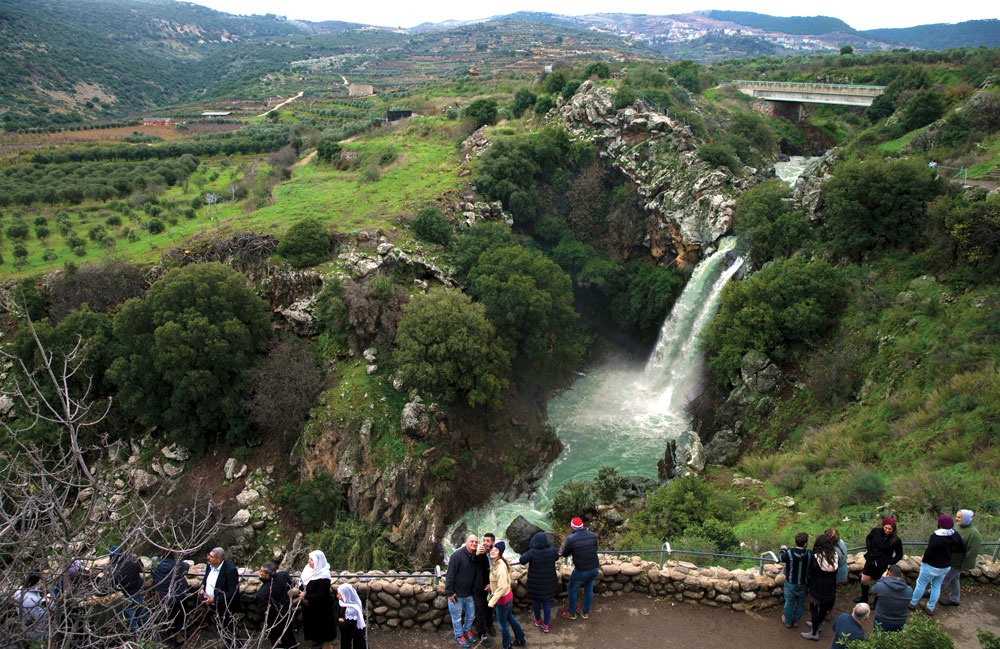 When I first moved to Israel in October 1967, I visited a family living in a kibbutz at the foot of the Golan Heights. The father told me how he and his son were walking just outside their house when suddenly Syrian soldiers began shooting down at them from the slopes of the Golan Heights.

They raced for their lives and reached the safety of their home. But, he said, for 19 years, since Israel’s Independence, they never knew when or where the next bullets would reach their kibbutz. Until the Six Day War changed everything.

In June 1967, a horde of several hundred Syrian tanks came rolling down the Golan Heights. The Syrians had not allowed its civilian population to live on the Heights facing Galilee so there would not be any civilian impediments to Syria’s military goal to destroy Israel.

Those rugged bluffs and precipices, spanning 40 miles, reaching an altitude of 9,232 feet (2,814 meters) were dedicated to creating an impenetrable network of fortifications, trenches and concrete bunkers, sitting behind dense mine fields.

However, a few years earlier, Eli Cohen, an Israeli spy, had become the Chief Adviser to Syria’s Minister of Defense. Feigning sympathy for the soldiers sitting in the sun, Cohen instructed the Syrians to plant trees by their bunkers so they would have some shade.

Moreover, Cohen learned of a secret plan by Syria to create three successive lines of bunkers and mortars; the Israel Defense Forces would normally have expected to encounter only a single line. 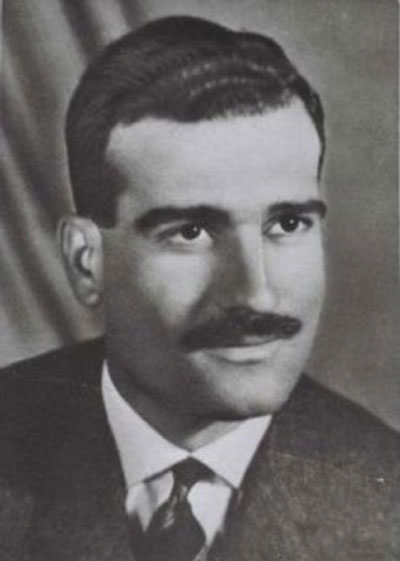 Eli Cohen, Israeli spy whose intelligence greatly helped Israel to scale in two days the “impenetrable fortifications” on the slopes of the Golan Heights

Eli Cohen was caught and publically hanged in Damascus two years before the Six Day War, but the trees were still there, identifying the exact location of each bunker! Because of Cohen’s strategic orders to the Syrian soldiers years before, the Israelis were able to accurately knock out almost all of the bunkers, and capture the Heights of the Golan by the next day.

The intelligence Eli Cohen gathered is considered an important factor in Israel’s miraculous two-day capture of the Heights. He is a national hero in Israel.

The Golan Heights’ connection to Israel goes back more than 3500 years! It was actually Moses and the Israelites who conquered this high plateau (then called Bashan), when they killed King Og, a giant whose bed was 13 ½ feet long. Moses gave Bashan to the half-tribe of Manasseh, Joseph’s descendants [Joshua 22:7] – an area of nearly 700 sq. miles (1800 sq. kilometers).

Joshua 13:30 also mentions they took possession of sixty cities, later described as large cities with walls and bronze-barred gates [I Kings 4:13]. Of those, the Levites, who led worship of the God of Israel, were given thirteen cities in Bashan [I Chronicles 6:62].

Hundreds of years later when Ezra and Nehemiah gathered a remnant of Israelites in Jerusalem, Ezra stood on a raised platform and read them the Book of the Law. Then the Levites led these returned exiles in praise to God, thanking Him for the lands God had given to Abraham’s descendants saying:

“You also gave them [the children of Israel] kingdoms and peoples, And allotted them as a boundary. They took possession of…the land of Og the king of Bashan.” [Nehemiah 9:22]

But Israel’s history in Golan doesn’t end there.

During the times of the Maccabees and even Yeshua’s lifetime, Jews lived and worked on the Golan Plateau. After the destruction of the Second Temple, the Jewish people were again exiled. Yet there was still a remnant who continued to live in the Golan until the 7th century.

The synagogue in Katzrin, at the foot of the Golan Heights – a wonderful historic place to visit – was built in the 6th Century, until conquering Muslims turned it into a mosque. In fact, another 25 synagogues in the area have been unearthed. Those were used until the 7th century Muslim conquest.

Muslim rule severed the more than 1,600 years of continuous Jewish residence and forced religious conversions on Jews who lived in the area. Yet there is some evidence of Jewish life in the Golan even after the Muslim conquest.

A REMNANT RETURNS TO THE GOLAN

At the end of the 19th century, the Zionist movement awakened from its centuries of slumber. Slowly but surely, a Jewish remnant began to dream about the resurrection of a Jewish state. The Golan Heights was clearly considered part of their historical heritage.

Starting in 1883, close to the time Eliezer Ben Yehuda, father of the modern Hebrew language, and a few pioneers moved to the Holy Land, Jewish communities were again birthed in the Golan. Soon after, Baron de Rothschild purchased and lawfully transacted 150 square kilometers of the Golan plateau!

Even during and after World War I, long before modern Israel was established, the Zionist Movement was issuing public demands that a Jewish State must be established including the Golan Heights, Mount Hermon and even some of Lebanon that was part of Israel’s Biblical heritage.

Many of Israel’s founding fathers were active in encouraging and helping an expanding Jewish population move to the Heights. Again, at the 1919 Versailles Peace Conference, the Zionist Movement forcefully demanded that the future Jewish State would include the Golan Heights and what is known as southern Lebanon and western Syria.

At that conference, the United States recognized these borders demanded by the Zionist Movement! The U.S. stressed that the Jewish State must have control over its water source on Mount Hermon.

In the end, the United States’ proposal was not even officially debated because the U.S. withdrew from the discussions! Britain and France divided up the Holy Land, leaving France with the Golan. Yet the Zionists continued to promote proposals for the Biblical borders of a Jewish State. The Jews even paid taxes to the French Mandate for the land Rothschild had purchased.

Though the Versailles Peace Accords excluded the territories of the Golan from the scope of British control, nevertheless, Jewish organizations continued attempting to buy lands in the Golan.

Some fifteen years later, one buyer, Yehoshua Hankin, purchased about 300 square kilometers of land in the Golan, northeast of the Sea of Galilee. However, the project failed as soon as the local Arab leadership discovered the Zionist Movement was behind the purchase.

Believe it or not, Zionist organizations kept trying until 1946 when the French Mandate ended and Syria was granted the status of an independent nation. Despite the validity of Jewish proprietary rights to the land and the fact they had been lawfully and legally obtained, Syria rushed to expropriate the ownership over these lands and nationalized them, claiming them as “sacred lands.”

The Jewish community leaders then tried to defend their ownership through litigation in a court in Syria, but to no avail. 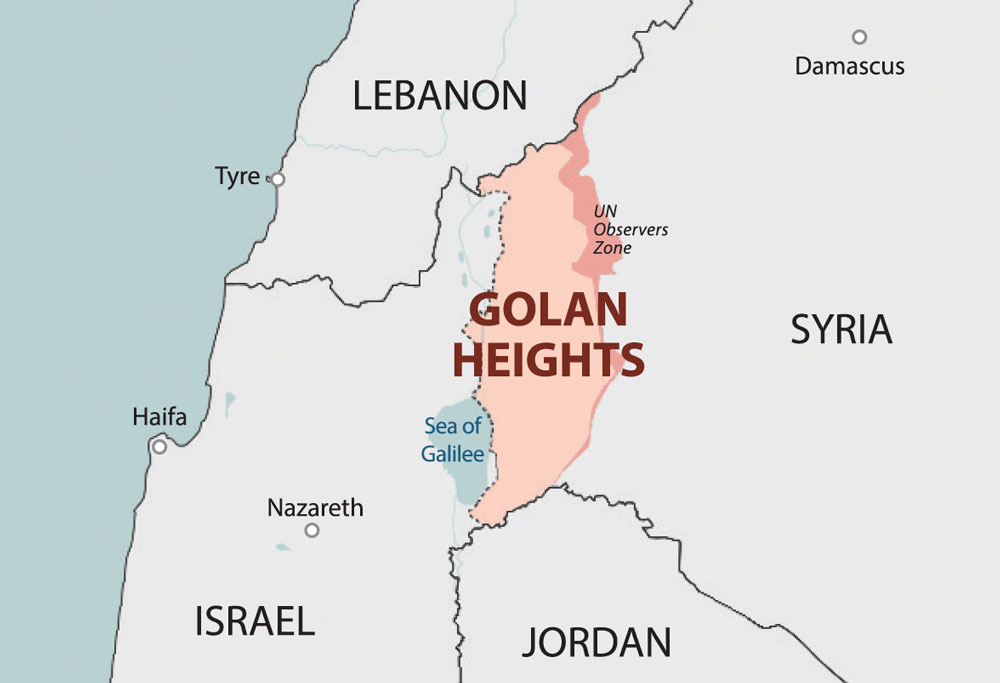 The Golan Heights borders Lebanon, Syria and Jordan. Its height of over 9,000 feet has been a superb buffer zone between Galilee and Syria. In fact, until Syria’s Civil War, Israel’s border with Syria has been the quietest of all its borders.

Amazingly, the Jewish people still didn’t give up! Israel’s first Prime Minister, David Ben Gurion, did not change his view concerning these territories that were torn from the Land of Israel nor his aspiration to return and restore the historic Jewish communities in them.

In a speech in 1947, Ben Gurion said, “We demand that the Jewish community shall encompass the western part of the Land of Israel…the Hauran [western Syria], the Bashan and the Golan up to south of Damascus.”

To this day, the Jewish National Fund owns the proprietary rights for many plots of land in the Golan and even the Hauran area bordering Damascus – lands that were purchased with Jewish money for settlement purposes.

But it took an invasion into Israel by Syria for this ancient heritage, given by God to Abraham, Moses, King David and their descendants, to return some of the “mountains of Israel” to their original owners.