God’s plan to Heal America and Unite the United States So it is, America, listen to the word that I speak to you today. I have placed those in your House called White, this is My doing, this has been My saying, yet there are those who stand to despise, ignorant of that which I’m bringing to the room, to the house, by the way of My Holy Spirit. And as it was healing that day, do you not understand that there have been those in this land, My people called by My Name have cried out unto Me and I have heard them and I have sent My plan to heal your land.

And this promise is not just for you, but it is for your children and it is for the nations of the earth for what is released in this house, the house of your government shall touch the nations in a great way. Do not get caught up in the arguing, the fighting, the discussing; but discern that which I am releasing that will bring a nation together. United States you shall be, you will be united for there is a unity that is coming and there is a healing that is breaking forth, will you receive it? Will you receive it?

Prophetic Word Given by Pastor Hank Kunneman on December 4, 2016 at Lord of Hosts Church. 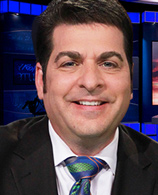