The Faith of a Child 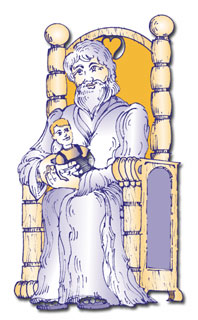 Recently, while once again facing financial discouragement and temptation to fear for the future, I read Luke 12. Yeshua speaks about the Kingdom of God and addresses his talmidim (disciples):

The Kingdom of God has to do with the manifestation of God’s power and authority. Another translation says it was the Father’s “good pleasure” to give us the Kingdom, i.e. to live in the manifestation of His power and authority in our lives and in the lives of those to whom we minister. Our Father has not given us the Kingdom reluctantly, but gladly. He was not forced to give it to us, but He chose to do so. We don’t have to wrangle anything out of Him.

If we read the entire passage, from verse fifteen through verse thirty-four, we can sense these words were spoken against a backdrop of Yeshua’s humanity and His experience with the same scarcity that presents itself to us in this world today. Yet overriding this scarcity is Yeshua’s trust in the loving bounty of the Father who has never let Him down. The same Abba who feeds the birds also feeds Yeshua and will also feed us, His talmidim.

What does this mean for 21st century warriors who may feel they are walking on water, financially speaking? It means that when you face layoff or cutbacks in work hours or business volume, Abba takes care of you. When you hear about pension plan cutbacks or watch your life savings drain away, you can look at your own future fearlessly—not because of what you have in the bank or in your IRA, but because of the Father who will never forsake you.

Who are the talmidim of Yeshua? They are those who take up their cross daily and die to their own agendas, those who sit at the Master’s feet to listen for His plan and then do it, those who do not look to another man or to the world to provide, but see that Heaven’s window is open wide to bless them and those for whom they pray. They are those who walk in the childlike faith of the Son of God. Therefore, go in peace, and do whatever He tells you, for He gladly chooses to give you the Kingdom.