An Act of the Heart 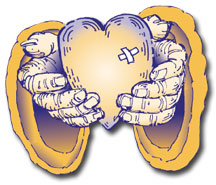 Most of us know that an intercessor is a “go-between”—someone who makes the case for another in the court of Heaven. An intercessor is an advocate—like a lawyer in a courtroom. An intercessor has standing before God to speak on behalf of someone else to bring forth a certain result in that individual’s life.

Several months ago I rejoined the work force after being home for more than 15 years. By training, I am an attorney. But, until recently, I had never really practiced law in a courtroom setting.

Nowadays, I find myself before a judge in probate court about once every 10 days. Each time I prepare myself by rehearsing a little introduction, telling the judge my name and who I’m representing that morning. Then I rehearse whatever points I think I’m going to have to make to get the judge to sign the papers for my client.

I realized today that being a good advocate is not about saying the right words. It’s not about having a quick mind, although intelligence can be an asset. It’s really about engaging with the plight of my client. I realized that when I really “feel” the rightness of my client’s request, my speech becomes more fluent, and my points flow together with a commanding logic.

This isn’t about “feelings” per se. It is about carrying my client’s concern as if it were—mine! The more I identify with my client’s plight, the stronger my advocacy is.

That’s the way intercession is supposed to be before God. The more that the intercessor identifies with the position of the person he prays for, the more fervent his prayer becomes. Fervency, as we see in James 5:16, is one of the elements of prevailing prayer.

Of course, we can be fervent in ignorance and get nothing done in the spirit realm. Zeal without knowledge gets us nowhere—except maybe in trouble! But knowledge alone is not enough for successful intercession either.

His greatest intercession was made by identifying with the ones for whom he interceded. This was not an act of the mind only, but primarily an act of the heart. And the life which flowed from his heart quite literally was poured out, as his blood covered his body in this greatest act of intercession.

I’m talking, of course, of Yeshua. He is the great High Priest of our prayers.

The Levitical high priests of the Old Covenant wore a shield of 12 stones over their heart, representing their heart’s concern for the 12 tribes of Israel. And on their shoulders they wore semiprecious stones carved with the names of those tribes. These priests were to carry Israel into the presence of God.

Yeshua, however, is of a different priestly order. He carries us before the Father in His heart, not merely on it. He did not merely bear the burden of our sin for us; His shoulders are scarred with the price He paid to deal with the fruit of sin completely.

Picture what He did on the cross, as if His physical body were dominated by His gigantic heart, pouring out its lifeblood for us. This is who He is! This is what He did for us: completely identifying with us on the cross, so that we could later be identified with Him in the courts of Heaven.

Lord, shape our hearts to be more like Yours. Help us to identify with those for whom we pray, so that we become stronger, more fervent advocates in Heaven.